"In the past three years in Hengqin, I see more young people from Macao come, since the local government has created an environment to spur innovation and entrepreneurship," said Huang Yin, a young Macao entrepreneur, when expressing her experience in Hengqin.

"In the past three years in Hengqin, I see more young people from Macao come, since the local government has created an environment to spur innovation and entrepreneurship," said Huang Yin, a young Macao entrepreneur, when expressing her experience in Hengqin.

Majoring in psychology at the University of Macau, Huang chose to devoted herself to promoting traditional Chinese medicine (TCM) after graduation. Focusing on promoting TCM and Internet medical care, Huang established her first company in Macao in 2018 and set up a branch in Hengqin in the following year, Bay Valley Technology Research (Ltd.).

Last September, China issued a general plan for building the Guangdong-Macao in-depth cooperation zone in Hengqin. It addressed the TCM as one of the four major industries the Zone would develop. It attracted startups like Huang's. 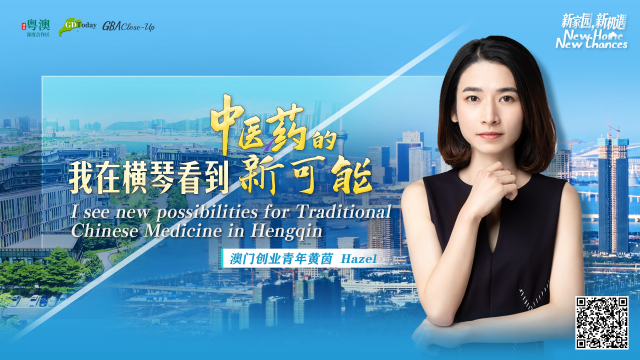 Huang's company is located in the Macao-Hengqin Youth Entrepreneurship Valley (Inno Valley HQ), where many young entrepreneurs like Huang made the first step in Hengqin. They can enjoy rental subsidies, apartments for talent, regular job fairs, and so on. All of these have stimulated the development of enterprises within the valley.

According to the latest data, the Inno Valley HQ has incubated 775 companies (projects), of which 343 are Macao entrepreneurs.

After nearly three years of effort, Huang's company now runs quite well. One of the main businesses of Huang's company is to bring high-quality TCM products from the Chinese mainland to Macao by offering one-stop services covering all relevant procedures. And then, using Macao as a platform, the company will help the products and technologies explore Portuguese-speaking countries' markets.

Although the pandemic has slowed down the process, Huang is still confident that the TCM industry in the Guangdong-Hong Kong-Macao Greater Bay Area (GBA) will go global in the future. "Macao's advantage lies in the trade ties it has established with Portuguese-speaking countries. Years earlier, when our team conducted market research in Portugal and Brazil, we found people open-minded about TCM products."

Huang's company has also created an online platform for medical appointments. So far, the platform has cooperated with 90 clinics and hospitals in Macao. Although clinics are all located in Macao, services are open to all people in the GBA.

Daniel Kuan, the person in charge of one of the cooperative clinics, shared that although he started to use the platform less than six months ago, he had seen a noticeable increase in the number of patients. "In addition to local patients, many from other GBA mainland cities have come to my medical center," he added.

In recent years, Huang has also worked with the Associação dos Investigadores, Praticantes e Promotores da Medicina Chinesa de Macau (AIPPMCM), the largest TCM professional association in Macao, by arranging exchange activities between the association and TCM companies and schools in mainland cities in Greater Bay Area. Shi Chongrong, president of the AIPPMCM, said that such exchange activities could broaden the horizons of the members of the association.

When asked about her plan, Huang said Hengqin had a bright future ahead of it. She intends to invite more Macao doctors to Hengqin or other cities in the GBA to learn about the TCM development in the mainland. She added that she wanted to work with more TCM enterprises to explore global markets.