"In the future, many Macao residents will come to live and work in Hengqin, and it will be their new home, so I hope the legal service industry can be the first to try and build a bridge between Hengqin and Macao." When talking about his cross-boundary practice in Hengqin, Vong Keng Hei, a young Macao lawyer, began to shine.

"In the future, many Macao residents will come to live and work in Hengqin, and it will be their new home, so I hope the legal service industry can be the first to try and build a bridge between Hengqin and Macao." When talking about his cross-boundary practice in Hengqin, Vong Keng Hei, a young Macao lawyer, began to shine.

In 2019, Vong came to Hengqin and formed a three-region joint venture law firm in Hengqin with two other law firms from Zhuhai and Hong Kong, starting a new chapter in his career in the Guangdong-Hong Kong-Macao Greater Bay Area (GBA).

Last September, China's central authorities issued a general plan for building a Guangdong-Macao in-depth cooperation zone in Hengqin. It has further enhanced Hengqin's openness and economic vitality, resulting in a diversified demand for legal services. Hence, Vong has embraced more opportunities in his career in GBA. 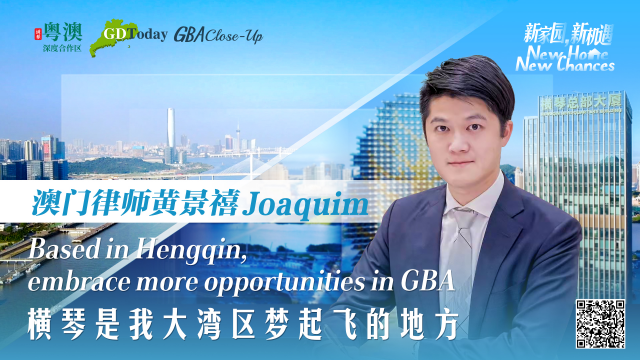 Since the Outline Development Plan for the GBA, more exchanges and cooperation opportnities have been developed between the nine mainland GBA cities and Macao. There will be a great demand for legal services in the two-way interactions. Thanks to the coordination of rules in Guangdong and Macao, in July 2021, Vong successfully passed the first GBA lawyer's practice exam and obtained his practice qualification in the mainland.

Macao entrepreneur Lao Chilong, one of Vong's Clients, has been in Hengqin for eight years and currently runs a technology company and a coffee shop. He said that due to his unfamiliarity with the environment in Hengqin, he encountered many legal issues such as labor contracts and taxation during the entrepreneurial period. As a proficient professional in the laws of the two places, Vong can explain legal matters in terms that are familiar and Macao people are more accustomed to. This can help Macao entrepreneurs like him understand.

In addition, Macao lawyers' cross-boundary practicing is also playing an increasingly important role in foreign-related business. Deng Huafeng, director and the senior partner of the joint-venture law firm, said that for domestic companies to go global and, significantly to develop markets in Portuguese-speaking countries, Macao lawyers have an irreplaceable advantage.

Since last September, Hengqin's development has pressed the accelerator button, aiming to be a new space that provides convenience to Macao residents' life and employment, a new model to enrich the practice of "one country, two systems." Benefiting from this, Vong has ambitiously expanded his career in the GBA.

Last December, the Labor and Personnel Disputes Arbitration Committee in Hengqin Guangdong-Macao Deep Cooperation Zone was unveiled. The first batch of six arbitrators from Hong Kong and Macao was announced. Vong was one of them.

According to Wu Yinxi, Vong's colleague in Hengqin, Macao arbitrators are familiar with the legal and social systems of the two places, so when dealing with labor disputes involving Macao companies and residents, can better find ways to resolve them.

Moreover, being based in Hengqin, Vong has gradually expanded his footprint to other cities in the GBA. In 2020, Vong entered Sun Yat-sen University to study for a doctorate in law, exploring how to realize the connection between the legal systems of Guangdong and Macao from an academic perspective.

On January 11, as a member of the Zhongshan CPPCC, Vong participated in the first session of the 13th CPPCC Zhongshan Committee. This year, his proposal was about further improving Zhongshan policies on foreign-related alternative dispute resolution, hoping to form Zhongshan-style criteria of qualified mediators from Hong Kong and Macao.

"In the past, I just thought how Macao would be. Now I am thinking about how Macao can get involved with the development of GBA and the whole country. I can see it from a broader perspective. I hope I can share my Hengqin experience with other GBA cities, " Vong said proudly.

Presented by Guangdong-Macao In-Depth Cooperation Zone in Hengqin and Southcn.com