On June 28th, with the last steel box girder being welded, the Zhongshan Bridge deck of Shenzhen-Zhongshan Link was officially completed, marking an essential stage of this sea-crossing mega project.

On June 28th, with the last steel box girder being welded, the Zhongshan Bridge deck of  Shenzhen-Zhongshan Link was officially completed, marking an essential stage of this sea-crossing mega project. 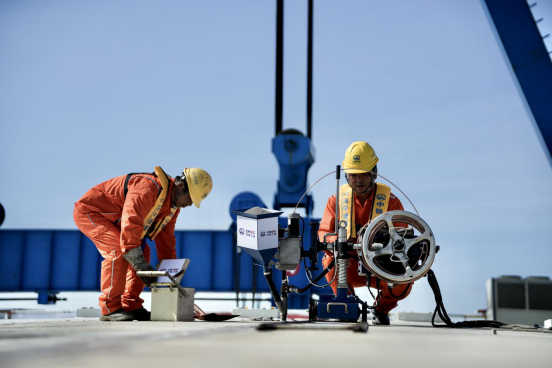 Weighing about 233 tons, the last bridge section is 10 meters long and 46 meters wide. The construction workers put it in place in just a few hours with 4 bridge cranes. 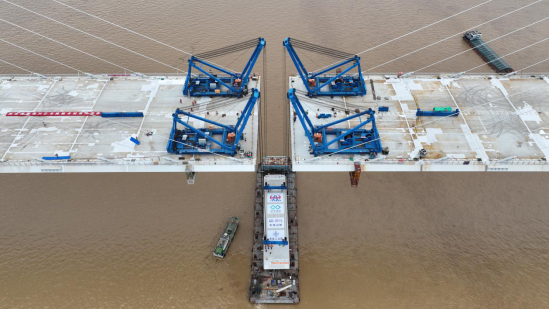 “At present, the smart manufacturing of steel box girder is still in the initial stage at home. Shenzhen-Zhongshan Link has built China’s first intelligent manufacturing production line of large steel structures, greatly improving the quality and production efficiency of the box girder. In the meantime, we have blazed new trails in the assembly & welding integration and full penetration welding technique, enhancing the anti-fatigue performance of orthotropic steel bridge decks,” said Yao Zhi'an, director of the Bridge Engineering Department of Shenzhen-Zhongshan Link Management Center.

Over the past seven months, a total of 69 steel box girders have been built despite the heavy sea wind, torrential rain, and scorching heat.

After completing the bridge deck, Zhongshan Bridge will enter a new construction phase of the two-way eight-lane road surface and its ancillary facilities.

According to Li Likun, Chief Engineer of the S06 Contract Project Department of Shenzhen-Zhongshan Link, China Communications Construction Company’s Second Highway Engineering Co., Ltd, Shenzhen-Zhongshan Link will not only cut the traveling time from Shenzhen to Zhongshan to just 30 minutes but also can boost the economic development in the whole Guangdong-Hong Kong- Macao Greater Bay Area. 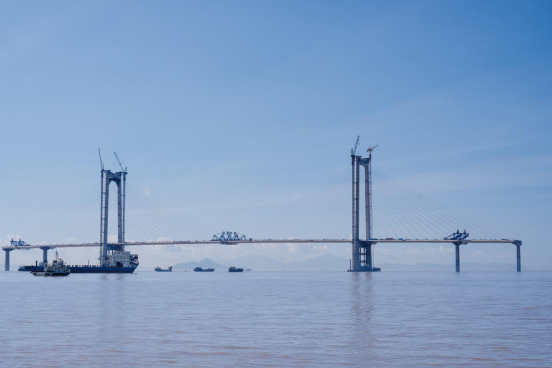 As a key part of Shenzhen-Zhongshan Link, Zhongshan Bridge is a double-tower cable-stayed bridge with a total length of 1,170 meters and the main span of 580 meters. It boasts a central tower of 213.5 meters high, which is equivalent to a 70-story building. The east and west main towers are connected with the bridge deck through 120 stay cables, which look like a harp across the sea.

Currently, Shenzhen-Zhongshan Link's project is steadily advancing with 50 percent of the annual investment plan in 2022 accomplished. For instance, Lingdingyang Bridge is setting up the main cable strands and building the upper structure. 26 immersed tubes have been embedded in the undersea tunnel. And the construction of the east and west artificial islands is also underway.

So far, the project has been carried out for five years and six months, with more than 10,000 workers braving the weather and forging ahead in a pioneering spirit. It is expected to open to traffic in 2024.