Guillermo Salvador Marinaro Montalbetti from the London monthly visual arts magazine Contemporary has pledged to help promote a real and rapidly developing China, and he is not alone among world journalists.

"I think it is a very important task for us to be more in touch with Chinese media and Chinese journalism," said Montalbetti. Previously, he had learned specifics on how burgeoning China is benefiting the whole world in terms of trade, business, culture, and incomes, among other fields. He used the word "gigantic" to capture his impression.

Montalbetti was one of the journalists from prominent mainstream news agencies to attend the 21st Century Maritime Silk Road Forum on International Communication & Chinese (Guangdong) Companies Going Global held in Zhuhai from Nov 28 to 30.

The event drew worldwide attention to the southern province of China, one of the earliest in the country to develop and open up, and spotlighted what it has achieved and what can be expected from it in the future in the context of the national Belt & Road Initiative. 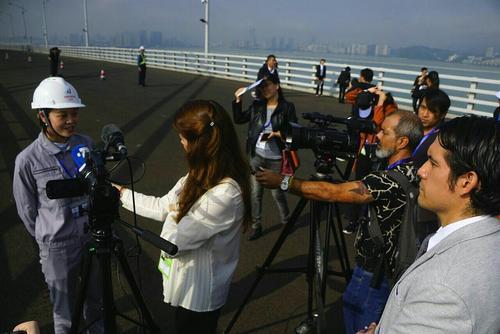 Progress of the HZMB is shared with international news media.

If three days of being exposed to Guangdong's state-of-the-art technologies at the forum's accompanying exhibition were not persuasive enough, personal visits to Zhuhai, the host city as well as the emerging innovation hub of Guangdong, would overcome any doubt.

The soon-to-be-completed Hong Kong-Zhuhai-Macao Bridge (HZMB) was the first stop for a series of interviews. More than 100 journalists from home and abroad stood on what is going to be the world's longest sea-crossing combination of bridges, tunnel, and two engineered islands on Nov 30.

Montalbetti was specifically invited for his expertise in presenting such a mega project gained from extensive experience working for the world's most widely distributed arts magazine. It covers visual arts, news, architecture, design, and other fields.

The transport link is 55 km long, 20 times the length of San Francisco's Golden Gate Bridge. Standing on it, Montalbetti foresaw Zhuhai as a strategic point after the bridge opens early next year. The Lingding Sea-span will be sure to bring Zhuhai, Hong Kong, and Macao closer, which will be positive for all three communities, he said.

Feeling much the same was Muhammad Zamir Asadi from Independence News Pakistan. Asadi emphasized the convenience arising from the fact that the project will shorten the four-hour drive from Hong Kong to Zhuhai to half an hour, which, he said, "will be having maximum benefit." The way of linking capital and information flow from the three sides is brilliant and bold, which can be copied by Pakistan, Asadi added.

He also said, "I believe that this bridge is a really great example of rapid development which is going on across China." 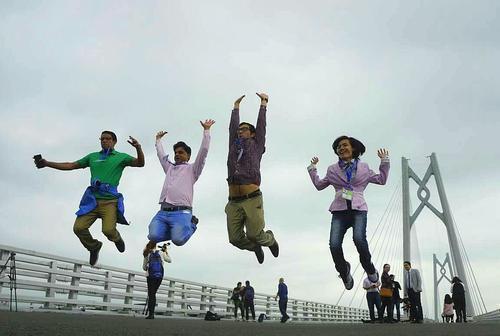 Ung Kaneka from National Television of Kampuchea pointed out the technical construction difficulties that have been overcome. For example, though unseen, the 6.7-km tunnel is indeed the country's first offshore immersed tube tunnel and the world's longest, deepest embedded project of its kind.

She expressed hope that her country might also have such a bridge to solve many travel difficulties.

Montalbetti observed that news about China reaching his region mainly arises not from within China but from other areas such as the United Kingdom through the BBC or the United States through Associated Press or United Press. He felt that in this context, deeper cooperation with Chinese media could contribute to further cultural exchanges and learning with China and other countries and regions around the globe.

That remark precisely met the theme of the forum, said an organizer. One of the main purposes was to promote better understanding of the Belt & Road Initiative and China's development prospects among domestic and international communities. International consensus was one of the key goals, according to the organizing committee.

More than 30 foreign guests were also invited to inspect the bridge and Hengqin New Area on Nov 30. Many of them expressed willingness to establish new contacts in the area after experiencing the innovative business environment and learning of favorable government policies.

For instance, a representative of Magdalen College School, an independent learning institution for boys 7 to 18 and girls in the sixth form, located on The Plain in Oxford, England, was looking forward to introducing quality education resources to the Guangdong-Hong Kong-Macao Greater Bay Area. A cooperative school running system could be built if it takes advantage of deeper cooperation within the area and the HZMB when it is completed.