This year, Bai Yongcheng, an actor, director and producer, will bring the drama "Mei Lanfang (梅兰芳)" to the GBA with his team and present a wonderful performance.

A tour of the multimedia drama "Mei Lanfang (梅兰芳)" will kick off in the Guangdong-Hong Kong-Macao Greater Bay Area (GBA) at the Guangdong Arts Theatre on April 8, 2022. With Guangzhou as the first leg of its tour, the drama will pay tribute to Mei Lanfang, a notable Peking opera artist in modern Chinese theater, with a new and unique multimedia creation. 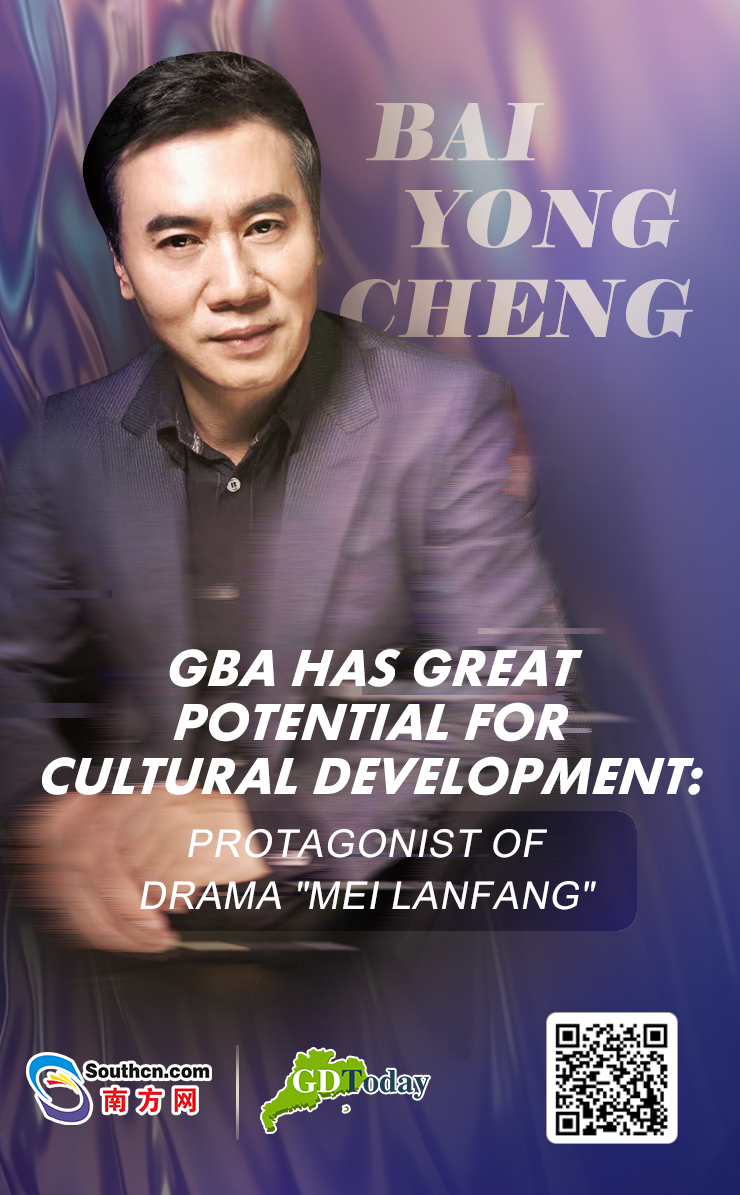 Bai Yongcheng, an actor, director and producer, will play the leading role, Mei Lanfang, in the drama. As a student of Mei Baojiu, Mei Lanfang's son who is also a renowned contemporary Peking opera artist, Bai has been working with this drama for nearly 30 years since its debut in 1994. This year, Bai and his team will bring this classic drama to the GBA and present a wonderful performance. 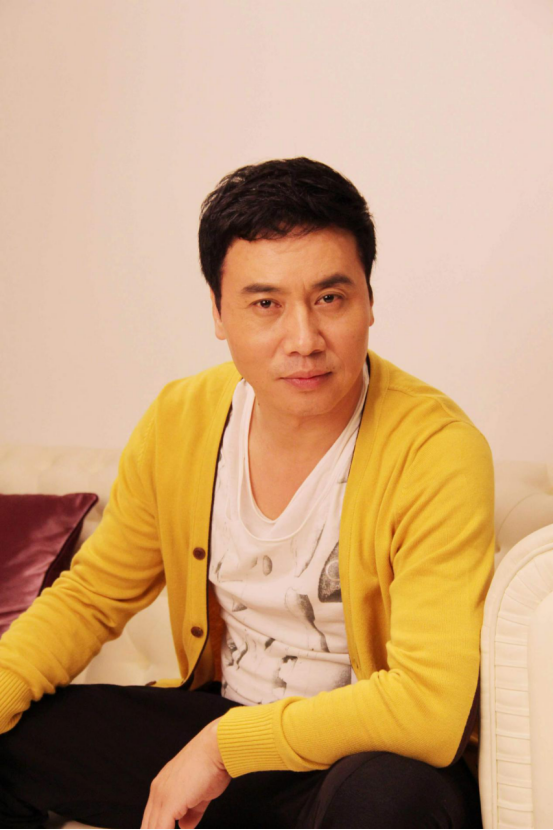 "Guangdong is a promised land for me"

"I think there is a fate between Guangdong and me," Bai told GDToday. He said that many of his plays have been broadcast on Guangdong Radio and Television, and as early as 2006, a stage drama called "Phantom of Time and Space (时空魅影)", which he created and directed, was premiered in Guangdong and ran for more than 380 performances here. "Actually, I think Guangdong is a promised land for me," he exclaimed.

In April 2021, Bai set up his own studio in Huangpu District, Guangzhou. In Guangzhou, he saw the cultural heritage of the GBA and sought creative inspiration here. He often goes to Six Banyan Temple, Dongshankou and other places to stroll around and observe the old folk houses here. He thinks that this kind of fusion and contrast between modernity and tradition is just the dramatic tension that actors need.

In 2022, in honor of the two Peking opera masters, Mei Lanfang and Mei Baojiu, the drama "Mei Lanfang" will return to the stage in the GBA with a new look. In addition to Guangdong Art Theatre in Guangzhou, it will also be performed in other GBA cities such as Shenzhen, Zhuhai and Hong Kong this year. 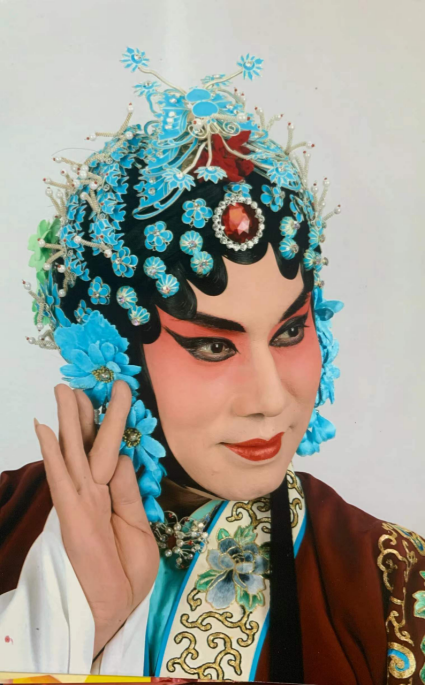 In the next stage, one of Bai's focuses is preparing for this drama. "We have already made preparations for the publicity and rehearsals, and some props and costumes need to be remade," Bai explained, "I am also adjusting the script to add some plots related to my teacher Mei Baojiu in the drama, hoping that people in the GBA can feel the spiritual communication between the two generations of masters."

Bai shared with the reporter that he hoped the people in Guangzhou could come to see the drama "Mei Lanfang" and evaluate his performance, as he hoped to further develop his artistic career in the GBA if there are some active responses. "If people accept me, I hope I can take this opportunity to gradually explore talents, cultivate talents and develop new projects here, making my own contribution to the cultural and artistic development of the Greater Bay Area step by step." 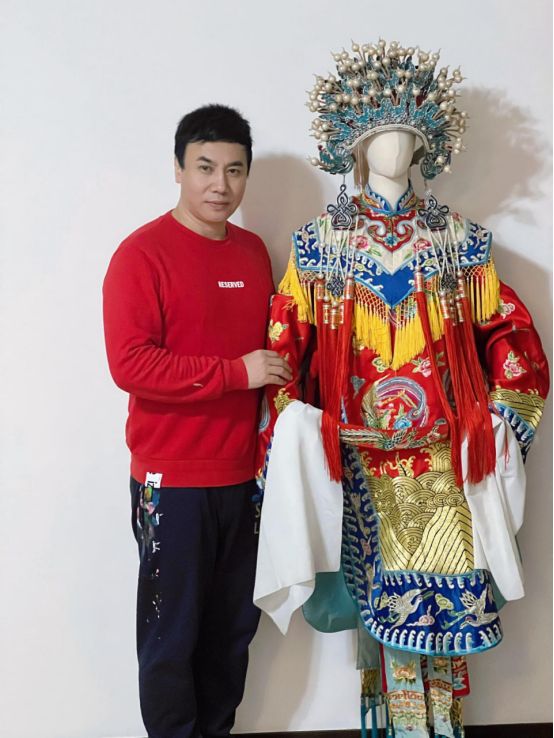 A photo of Bai Yongcheng and the costume Mei Baojiu gave him (Photo provided to Newsgd.com)

"The arts in the GBA will flourish and be fruitful"

On December 23, 2021, Bai received an award for "Best Supporting Role Actor" in the 13th Macao International Movie Festival for his film "Hello, Beijing". He pointed out that being able to win the award in Macao, a city in the GBA, has boosted his confidence in developing in the Greater Bay Area. 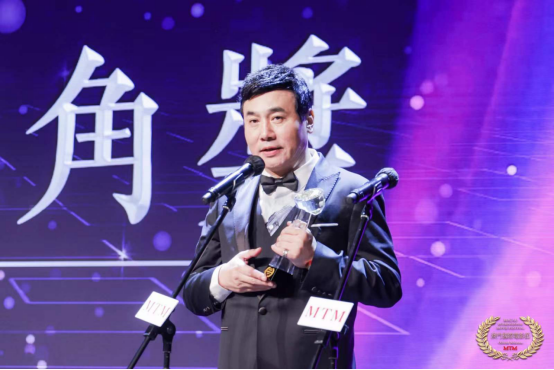 Bai is full of expectations for his future development in the Greater Bay Area. "I hope to gradually build a young and dynamic team, explore their strengths, and then create some artistic works that the younger generation here will enjoy."

He said that in the future, he plans to make a film or television work that reflects the living conditions of people in the GBA, so as to truly show the way of thinking of people here, how they are struggling and what their happiness comes from. Meanwhile, he also wants to create a musical based on Hung Sin-nui, a Guangdong local celebrity, in which Peking Opera and Cantonese opera fully interact.

In addition, Bai Yongcheng also suggested establishing a GBA youth art troupe or youth art theater with the linkage and cooperation between cities, promoting the development of drama in the Greater Bay Area.

"Young people need real art," said Bai, "the GBA has great potential for cultural development. If we can provide a suitable soil for development and sow some good seeds in the future, I believe that the arts here will flourish and be fruitful." 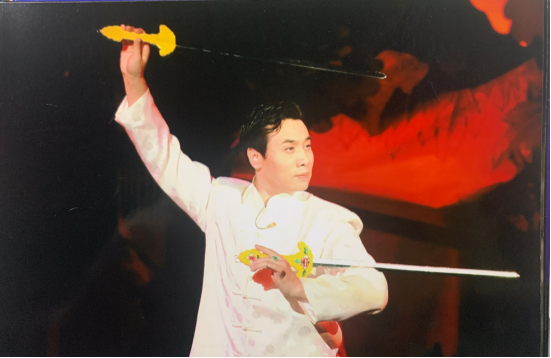 A stage photo of Bai Yongcheng (Photo provided to Newsgd.com)

Bai has been involved in theater since he was a child. He began to learn Qinqiang opera at the age of eight, performed on the stage at the age of 11 and became an actor and director when he grew up. Aside from the drama "Mei Lanfang", a masterpiece of his theatrical career, he also has other representative works including criminal investigation drama "Unbreakable Justice", as well as poverty-alleviation TV series "Sing Village Official" and "Not One Less".