Sculptures that resonate with the world

"Art is a universal language of the world, and the 'chubby women' series represents humor and happiness," said Xu, "When people in different countries see these sculptures, they can feel happy without a translation."

Last week, on the street of Salamanca, Spain, you might encounter such happy girls - the chubby women sculpture series created by Guangdong sculptor Xu Hongfei.

This is his 43rd chubby women exhibition outside China. "Art is a universal language of the world, and the 'chubby women' series represents humor and happiness," said Xu, "When people in different countries see these sculptures, they can feel happy without a translation."

Based in Guangzhou, Xu is a world-renowned sculptor and the dean of Guangzhou Sculpture Academy. 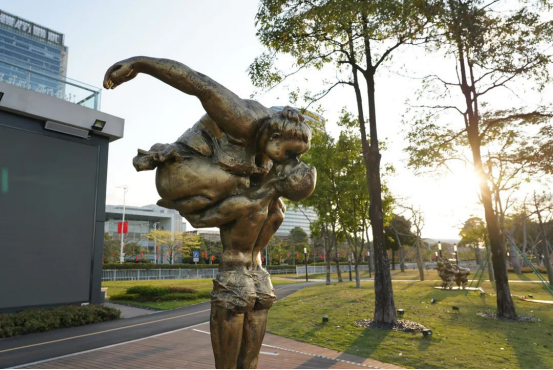 In recent years, Xu has held sculpture exhibitions in more than 20 countries and regions, presenting a series of works featuring the stories of Chinese people in this era.

Xu believes that sculptures like this can bring positive energy to people and help future generations understand the present era. Before this year's exhibition in Salamanca, the mayor wrote to Xu to invite him to hold an exhibition, so as to ease people's depression about the epidemic through his works. "Even during the pandemic, people all over the world still love art, especially works that show happiness and people's pursuit as well as record the era," Xu said.

"Shape is the language of sculpture," he said, "and when the sculpture reflects the life and happiness of the Chinese people, it can resonate with the whole world." 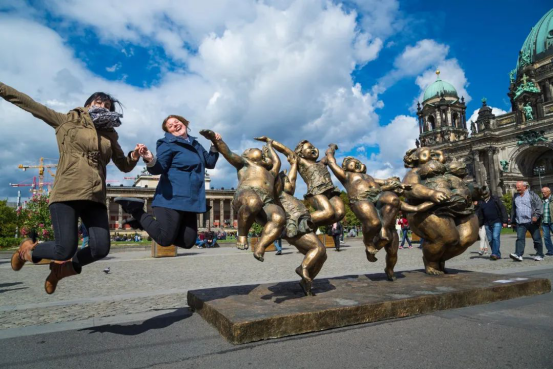 Record the era with sculptures

In addition to his "chubby women" sculpture series, Xu's recent exhibitions feature a series of works on the COVID-19 fight. Doctors rescuing patients, medical workers wearing protective suits and resting on the ground, Huoshenshan Hospital... Since the outbreak in 2020, Xu has used sculptures to record the scenes of Chinese people's fight against the epidemic. "I thought I should make some works to record the fight against the epidemic."

Bringing the image of a healthy, happy and confident China to the world is Xu's original intention to create the "chubby women" sculptures series, which coincides with the sportsmanship of the Winter Olympics. "Sports have power, beauty and various shapes, which are great sources for sculpture creation," said Xu.

Bring sculptures outdoors in the villages

In 2020, the "Xu Hongfei Sculpture Art 100 Villages Exhibition" kicked off, planning to display the sculptures outdoors to the public in 100 villages in China.

Xu believes that outdoor exhibitions shorten the distance between art and the public. "In the past, sculpture exhibitions were usually held in galleries or museums, and now I bring my works directly to people." he said.

In these years, Xu has surveyed over 50 villages and investigated the local environment. He indicated that it helps him to find out what works are needed there, which are more coordinated and integrated with the villages as well as have interaction with the villagers, so as to choose the proper exhibits. As a member of the National Committee of the Chinese People's Political Consultative Conference (CPPCC), Xu's proposals in previous years have focused on the issue of "art boosts rural revitalization."

"Rural revitalization needs art to step in," he said, "The countryside has developed well, but its public aesthetics, environment and cultural tourism still need the participation of artists."