As the latest COVID-19 outbreak has affected two thirds of provincial-level regions in China, people chose to stay put and explore new ways of entertaining themselves over the Labor Day holiday.

As the latest COVID-19 outbreak has affected two thirds of provincial-level regions in China, people chose to stay put and explore new ways of entertaining themselves over the Labor Day holiday.

During the five-day holiday starting from Saturday, citizens are expected to follow local policies of restriction, reducing outings to avoid infections of the more contagious Omicron variants.

The Chinese mainland reported 916 locally-transmitted confirmed COVID-19 cases and 7,340 local asymptomatic carriers on Saturday. The figures were lower than those recorded in the past week, but still kept the authorities on high alert.

Amid the new Omicron clusters, the Chinese capital city on Saturday announced to intensify restrictive measures against COVID-19 to best reduce cross-infection.

A notice is seen showing that a negative nucleic acid test result within 48 hours is required to enter the Longtan Park during the Labor Day holiday in Beijing, capital of China, April 30, 2022. (Xinhua/Ju Huanzong)

A negative nucleic acid test result within 48 hours is required to enter public venues during the holiday. Parks, open venues for entertainment and cultural activities are also capping the number of visitors to 50 percent capacity.

"We will spend most of our time in the city during holiday, taking our child to museums or parks," said a Beijing citizen surnamed Shen. The Capital Museum of China has suspended offering tour guides but provides visitors with electronic tour guides. 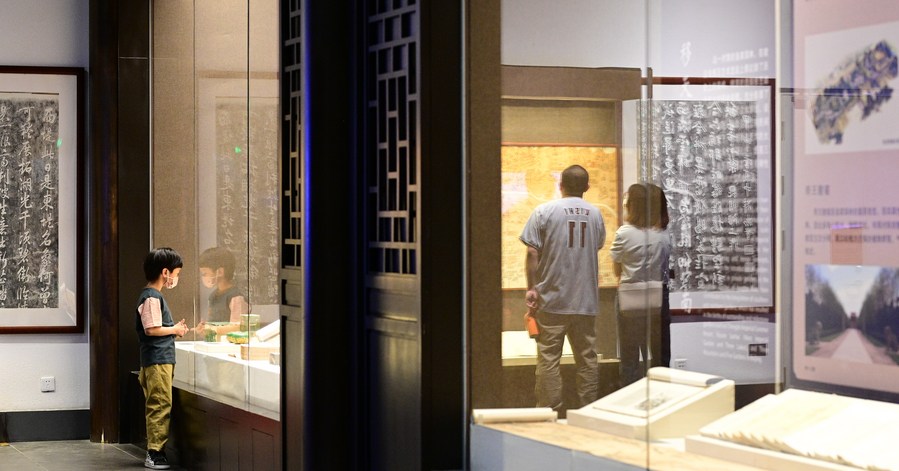 Tourists visit the Museum of Chinese Gardens and Landscape Architecture during the Labor Day holiday in Beijing, capital of China, April 30, 2022. (Xinhua/Yin Dongxun)

"We had planned for a homestay tour to the suburbs, but later canceled the trip considering the existing COVID-19 cases in Guangxi," said Gao.

The Guangxi regional center for disease prevention and control issued a notice asking citizens to minimize trans-provincial or trans-city travel and avoid going to medium and high-risk areas for COVID-19.

Liao Bintong, an employee with a tourism company in Guilin, the leading tourist city in Guangxi, said almost all customers from outside the region canceled their bookings before the holiday. Most of the visitors to the scenic spots are locals.

In east China's Shandong Province, people are encouraged to enjoy leisure time at their doorstep, such as camping, cycling, hiking and countryside self-driving tours, instead of traveling far, said Wang Chunsheng, an official with the provincial culture and tourism department.

According to the Ministry of Transport, China is expected to see notable drops in passenger traffic for the Labor Day holiday amid measures to contain COVID-19.

A total of 100 million passengers are expected to travel during the holiday, slumping 62 percent from a year earlier, said Zhou Min, an official with the ministry. 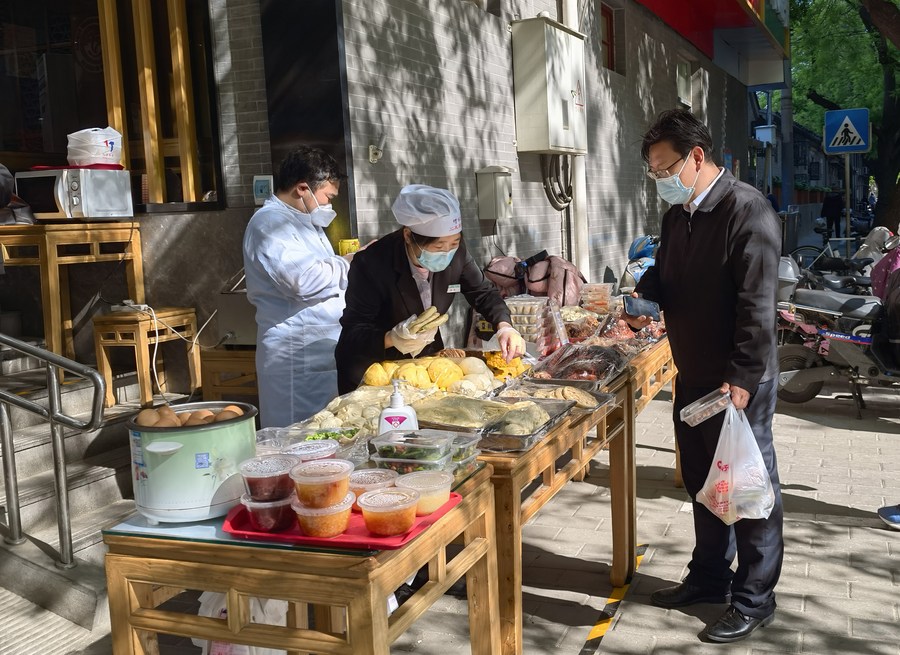 Photo taken with a mobile phone shows a resident buying breakfast outside a restaurant after suspension of eat-in services in Beijing, capital of China, May 1, 2022. (Xinhua/Li Xin)

"Among the gate tower buildings in Beijing, the Zhengyang Gate, located south of the Central Axis, is the most famous one..." a host introduced to the audience on the Chinese microblogging site Weibo on Sunday.

It was a livestreaming show jointly presented by Beijing Traffic Radio FM103.9 and the Communication University of China, dissecting the history of the 600-year-old Zhengyang Gate. The show attracted more than 8,000 views in less than an hour. 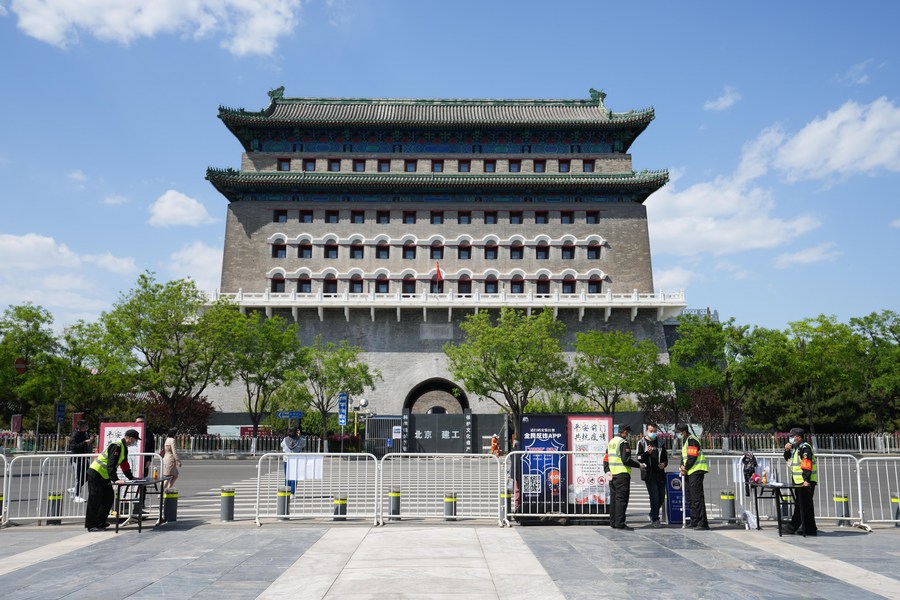 At 2 p.m. on Saturday, an elephant keeper was giving a bath to the giant mammals in the Beijing Wildlife Park while livestreaming on social media platforms. There were less than 10 visitors on-site, yet online, nearly 1,500 people were watching.

Li Xiaoyong, deputy director of the market management department of the Ministry of Culture and Tourism, said that it is important to make good use of information technology, promote online and offline integration, and provide more tourism products with no contact or gathering.

In north China's Shanxi Province, entertainment and other public venues also cap the number of visitors at 75 percent of the maximum flow. The provincial culture and tourism department cooperated with online platforms and major scenic spots to launch livestreaming activities, allowing people to visit Shanxi "on the cloud." 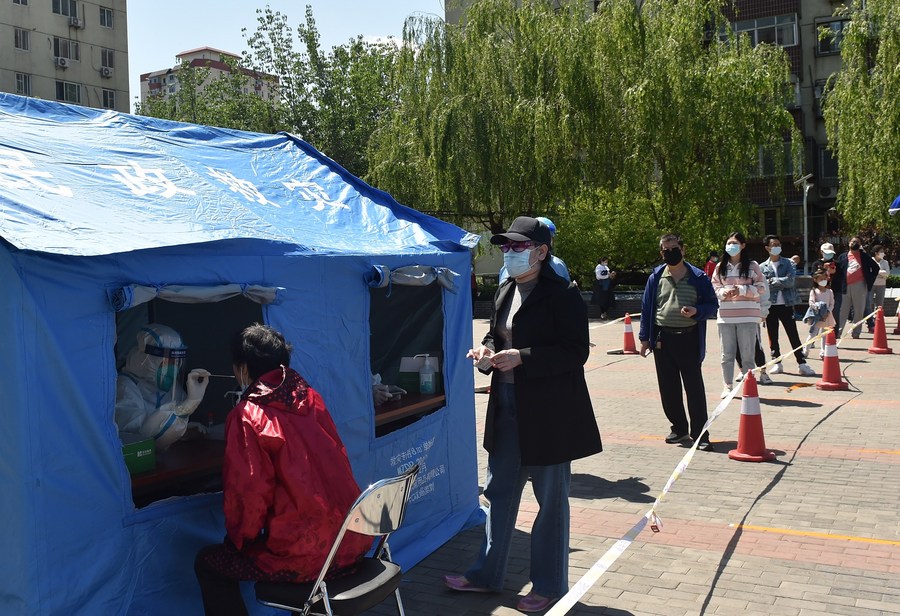 Stay-at-home life does not wear down people's passion for sports and exercise.

Honeypot Tennis, a tennis training company based in the central Chinese city of Wuhan, has launched free livestreaming classes, inviting parents and kids to learn about tennis by following a coach and watching tennis matches.

"We also livestream on Douyin and WeChat to instruct on bodybuilding, so that people can enjoy the joy of sports and fat burning at home during the outbreak," said coach Zhang Ziyu. 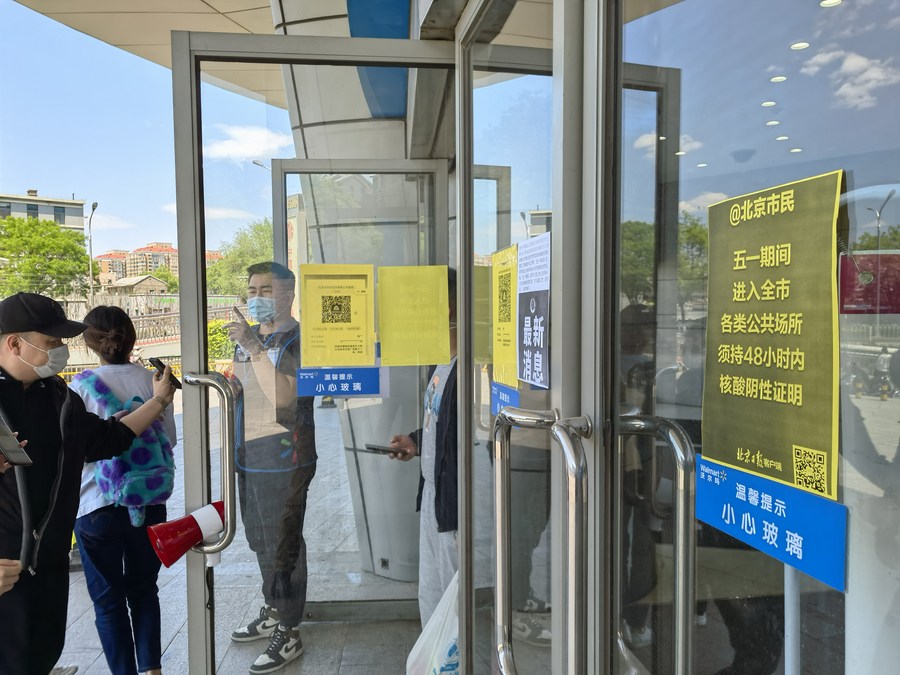 A staff member checks consumers' negative results of nucleic acid tests taken within 48 hours at the entrance of a supermarket in Beijing, capital of China, May 1, 2022. (Xinhua/Li Xin)

Video sharing and streaming platform Bilibili announced Sunday that the netizens will have free access to more than 3,400 documentaries on it in the following week.

"We hope everyone can explore a wider world through documentaries on Bilibili, whether you are going out or staying at home," the company said in a statement.