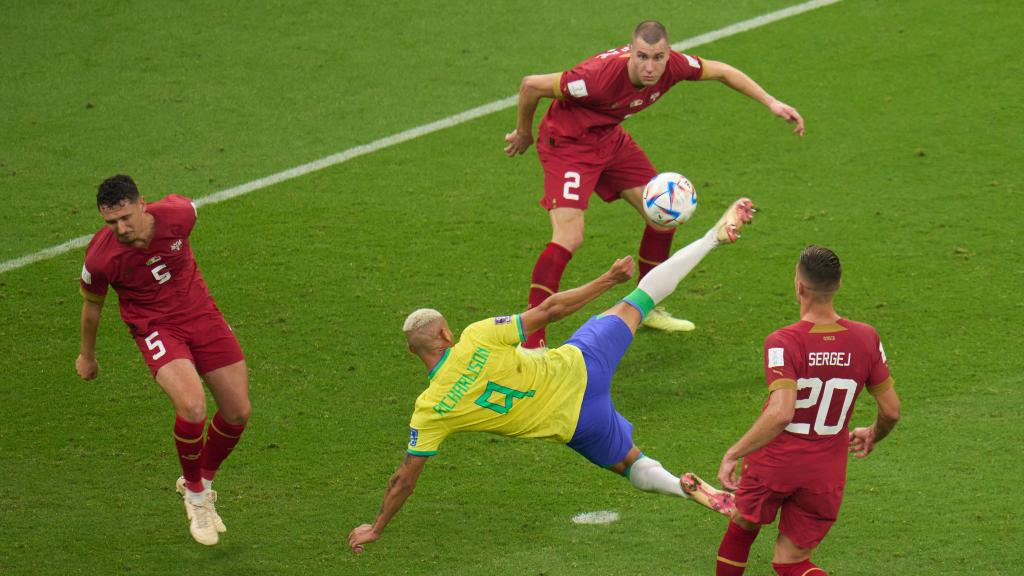 Richarlison (C) shoots to score during the Group G match between Brazil and Serbia at the 2022 FIFA World Cup at Lusail Stadium in Lusail, Qatar, Nov. 24, 2022. (Xinhua/Meng Dingbo)

Brazil's much-awaited debut in the 2022 World Cup ended Thursday in a 2-0 win against Serbia as Richarlison scored one simple tap-in and a spectacular volley to end the Serbians' brave resistance in the second half.

Although Brazil fielded five attacking players and the full backs also pushed forward, whenever they could, the title favorites could find no way through a dogged defense until there was over an hour on the clock.

Richarlison, who has yet to score in the Premier League for Tottenham Spur this season, was on hand to slide the ball home after Serbia keeper Vanja Milinkovic-Savic did well to push out a shot from Vinicius Jr.

His second goal was a work of art as he controlled, twisted and shot to put the ball beyond Milinkovic-Savic's reach.

Brazil continued to press and Casemiro hit the post from distance as they showed why many expect them to lift this year's trophy on December 18.

Switzerland's Breel Embolo scored against the country he was born in as the Swiss continued their incredible record in the opening match of their World Cupu campaigns with a 1-0 win against Cameroon.

The Swiss have not lost their opening match in the group stage of the World Cup finals since 1966.

Embolo finished off a move that started with Granit Xhaka and Xherdan Shaqiri in the 48th minute, before appearing to apologize to the country he was born in.

In the first half, Cameroon had chances to level the match but failed, and as the match progressed, the Swiss looked closer to a second goal than their rivals to an equalizer.

South Korea and Uruguay opened their Group H campaign with the fourth 0-0 draw of the tournament, but that doesn't mean it was a dull game as both sides had chances to take all three points.

Uruguay came closest to scoring through Diego Godin's header against the base of the post, while Federico Valverde, who was the best player on the pitch, was inches away from winning it in the last minute when his stunning 30-meter effort bounced back off the woodwork.

The second Group H game sprang to life in the 63rd minute when Cristiano Ronaldo won and scored a penalty to put his side on the way to a 3-2 win over Ghana.

There looked to be minimal if any, contact in Mohammed Salisu's challenge, but the referee pointed straight to the spot and Ronaldo made no mistake to scored in five World Cups. It was a "special gift" according to Ghana coach Otto Addo after the match.

Andre Ayew equalized from close range for Ghana, but quick-fire goals from Joao Felix and Rafael Leao made it 3-1 in the 80th minute.

Osman Bukari made it 3-2 in the 89th minute and Inaki Williams was close to leveling in the last instant of the game, only to slip after cleverly stealing possession from Portuguese keeper Diogo Costa.