U.S. economy is at least teetering on recession: CNBC

"This is not an economy that's in recession, but we're in a period of transition in which growth is slowing," said U.S. Treasury Secretary Janet Yellen. 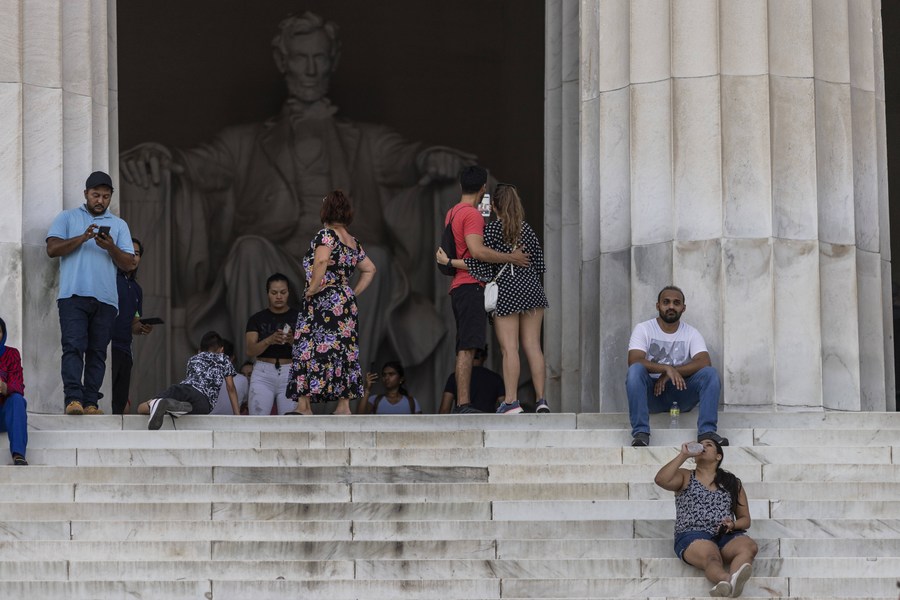 Tourists stay hydrated on the National Mall as a heatwave brings temperature to nearly 94 degrees Fahrenheit (34.4 degrees Celsius) in Washington, D.C., the United States, on July 24, 2022.(Photo by Aaron Schwartz/Xinhua)

"This is not an economy that's in recession, but we're in a period of transition in which growth is slowing," said U.S. Treasury Secretary Janet Yellen.

The White House is sure the economy is not in a recession nor headed for one. Wall Street is pretty sure there is no recession now, but isn't as positive about what's ahead, reported CNBC on Tuesday.

"Looking at the data, the picture is indeed nuanced. Nothing right now is screaming recession, though there is plenty of chatter. The jobs market is still pretty good, manufacturing is weakening but still expanding, and consumers still seem fairly flush with cash, if somewhat less willing to part with it these days," said the report.

With second-quarter GDP data due out on Thursday, the question of whether the economy is merely in a natural slowdown after a robust year in 2021 or in a steeper downturn that could have extended repercussions, will be on everyone's mind, according to the report.

"This is not an economy that's in recession, but we're in a period of transition in which growth is slowing," Treasury Secretary Janet Yellen told "Meet the Press" on Sunday. "A recession is a broad-based contraction that affects many sectors of the economy. We just don't have that."

If nothing else, the U.S. economy stands at least a fair a chance of hitting the rule-of-thumb recession definition of two consecutive quarters with negative GDP readings. The first quarter saw a gross domestic product decline of 1.6 percent and an Atlanta Federal Reserve gauge is indicating the second quarter is on pace to hit the same number, noted the report.