I'm told there is an energy crisis looming this year, but there might be a solution no one has thought of yet. 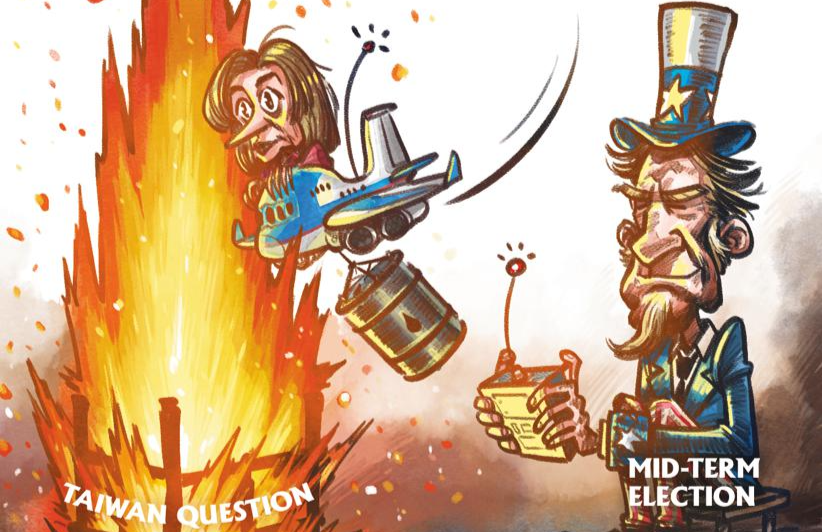 I'm told there is an energy crisis looming this year, but there might be a solution no one has thought of yet.

With all the furious backpedaling White House officials have done since US House Speaker Nancy Pelosi made her infamous visit to Taiwan early this month, just put them on a treadmill. You could power the whole planet in a matter of hours.

In that time we've seen the administration of President Joe Biden go from wariness over the implications of her visit, with Biden himself admitting the Pentagon has said it wasn't a great idea — not exactly a genius-level deduction to suggest antagonizing the world's second-largest economy and military with a symbolic gesture for no conceivable benefit is, perhaps, not the wisest move — to full-throated defense, complete with furious denunciations of China's comparatively measured response of military drills. Now news has broken another Congressional delegation has made its own trip to the island, and back onto this deranged merry-go-round we go. What joy.

One could argue they were boxed in by a need to stand by their fellow politicians and their bogus commitment to a highly specific and selective notion of "democracy" — let's ask some of the US' most repressive allies of convenience how much of a damn they give about that concept — but that is the coward's way out. These attitudes don't arrive fully formed out of the aether, they are born of concrete action and rhetoric. Both of which the office of President of the United States, last I checked, has plenty of influence over.

But this is to be expected. Long before former president Donald Trump's anti-China invective emerged as the default posture for American politicians — the Democrats basically agree with everything he said about China, they're just less vulgar about it — encirclement was the norm. US friendliness ended at the precise moment the country ceased to be a reliable lackey for its interests, i.e. on October 1, 1949. All that has changed in that time is the manner of approach, whether "soft" attempts at "peaceful evolution" or "hard" expressions of military might.

Even so I and others believed, admittedly naively, things might have turned out at least a little differently a year and a half ago. The Biden administration had a golden opportunity to roll back the clock and reset relations to something resembling stability on the day it took office. A re-normalization of the relationship would have provided not only a self-evident geopolitical benefit — alienating one's largest trading partner does not have great effects for the global economy, as we're seeing now — but been politically justifiable as a wholesale repudiation of the failed policies of its predecessor.

With the Democratic base and the world at large breathing a sigh of relief at the close of the embarrassing Trump term, Biden could have undone all the damage of his antecedent while minimizing the fallout. There would have been grousing from the hawks on the right and in his own party, of course, but the Republicans were always going to paint him as a Beijing puppet no matter what he did and most Democrats would have eventually fallen in line.

Instead, what happened? Just as other Democratic presidents have done before him, he served as the "Codifier-in-Chief" for Republican strategies and narratives, locking a bipartisan consensus into place that will take years to dislodge, if indeed it ever can be. Both of Biden's Democratic antecedents, Barack Obama and Bill Clinton, served this role ably, with Obama fortifying George W. Bush's surveillance state and military adventurism in the Middle East and Clinton fully entrenching a neoliberal austerity regime that, among other indignities, kicked millions off public benefits and incarcerated scores of Black men.

So the Biden White House, rather than break with Trump's agenda as it relates to China, has chosen to walk the same path, thus ensuring our immediate future is chock full of hair-raising near-misses and a steady deterioration of customary avenues for communication. Despite the full-court press administration officials have engaged in to shift the blame to China for this highly troubling depreciation in the world's most important bilateral relationship, there is no doubt who holds responsibility. China did not abrogate its agreements lined out in the three joint communiqués. China did not conjure up the regular provocations by which the US has deliberately ratcheted up tensions. And China certainly did not react out of proportion to any of these instigations; on the contrary, considering what these most recent pokes in the eye represented it has been wholly level-headed.

Despite these latest incidents, and the escalatory course the US has seemingly chosen, I still believe peaceful reunification is possible and obviously desirable. History is not static. Tensions may be high and the situation strained, just as they were after the Straits crises of the 1990s. But just a few scant years ago, Cross-Straits relations were the best they'd been in a very long time. There is no reason to think they cannot be that way again. Even now, hundreds of thousands of people from Taiwan live in contentment on the Chinese mainland. They sought employment, education or other opportunities, and evidently were satisfied enough to stay, have a family, build a life.

Official communications from the mainland still refer to the people of Taiwan as "compatriots" because that is precisely what they are, and no amount of meddling from bad-faith actors of any stripe can change that. Opinions ebb and flow, and it would be a laughable mistake to assume our present state of affairs is a permanent one. As the mainland's economy continues to grow and develop, staking out positions higher and higher on the value chain, further integration between the mainland and Taiwan will become all the more inevitable. Circumstances in five years, to say nothing of 10 or 20, will be even more favorable to this outcome barring more strident attempts at interference from outsiders.

Time is on China's side, and the US knows it. Why else would they be trying so hard to stir up conflict? The only way they can stop this process is by fabricating a casus belli for a devastating war that would isolate China and keep the US in pole position as undisputed hegemon.

There's no need to play that game. As with so many other areas where the US has distinguished itself as a malign actor — reneging on agreements for peace in the Korean Peninsula, nuclear power in Iran, Libyan sovereignty, climate change commitments, WHO membership, you name it — China has the opportunity to show there is another way.

The world is watching, and I have confidence it will prove itself up to the task.