About 27 months since confirming its first COVID-19 case, the United States reached a once-unthinkable milestone on Thursday as its death toll crossed 1 million. Observers said that is a tragedy caused by a failure of governance and a lack of respect for human life. 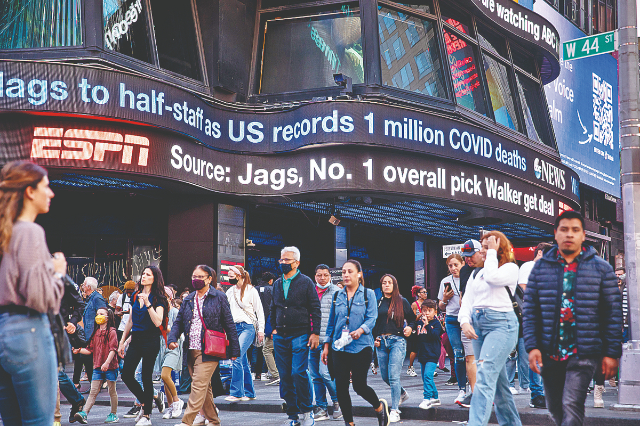 Pedestrians pass a ticker in Times Square, New York, the United States, on May 12, 2022,  as it reports the grim news that COVID-related deaths in the US have passed the 1-million-mark. [Photo/Xinhua]

About 27 months since confirming its first COVID-19 case, the United States reached a once-unthinkable milestone on Thursday as its death toll crossed 1 million. Observers said that is a tragedy caused by a failure of governance and a lack of respect for human life.

Biden said each of the dead represented "an irreplaceable loss", leaving behind a family, a community, and a nation "forever changed". He ordered flags to be flown at half-staff at the White House and all public buildings, grounds, military posts and naval vessels until sunset on Monday to honor the dead.

The tragic figure is greater than the total number of US citizens killed on the battlefields of the two world wars, the Vietnam War and the American War of Independence, combined, and occurred in a time span shorter than any of those wars.

Diao Daming, an associate professor of US studies at Renmin University of China in Beijing, said that the death toll was mainly caused by the failure of governance by the US authorities and the lack of an anti-epidemic policy that puts people first.

The US political system has not effectively pushed forward anti-epidemic efforts in the country, including its public policy on epidemic prevention, and has apparently allowed political considerations to override saving more lives and safeguarding the basic health and wellbeing of the people.

During the previous presidential race, the administration of Donald Trump downplayed to the COVID-19 pandemic while it was busy politicizing and stigmatizing the virus and attempting to shift the blame to other countries.

Biden promised to take the pandemic more seriously and came into office with a plan to get people vaccinated and show leadership in mask-wearing and mitigation efforts.

But these measures-which were endorsed by disease experts-have been turned into a political and legal battle in the US, Diao said.

From Washington to the local level, politicians in both parties have repeatedly fought over a series of issues, including nucleic acid testing standards, whether to wear masks, whether to return to work, the distribution of medical supplies and the terms of an aid bill, which delayed implementation of a coordinated and timely response.

"Since last summer, as the epidemic in the US continued to spiral out of control and Biden was eager to boost the economy, the administration has taken a relatively hands-off approach," he said. "It is not a scientific way of dealing with diseases and saving people, but was motivated by political considerations."

Most of those deaths, around 600,000, happened after Biden took office in January 2021 at the peak of a major wave of the disease, according to a Reuters report.

Diao said that as political factors rather than scientific and people-centered considerations had always motivated its anti-epidemic effort, the politically divided US had failed to make a concerted effort to combat the virus.

"With advanced medical technology and rich medical resources, the enormous number of deaths clearly shows a tremendous violation of ordinary people's right to life and health," he said.

Despite the public concern, government officials "are trying to project this nonchalance that we are back to normal", Gregg Gonsalves, an infectious disease expert at Yale University, said in an interview with the Politico website.

"It gives the impression that they don't care and infections don't matter ... This is all about political expediency and optics more than anything else, and it's entirely depressing," Gonsalves said.

Chinese Foreign Ministry spokesman Zhao Lijian on Friday expressed deep condolences over the tragic loss of 1 million lives. He said that the sounding of the mourning bell of the Washington National Cathedral is an act of remembrance, but also a wakeup call.

"Politics first or life first? Who made human rights a watchword anyway? Who puts people first? The answer is self-evident," he said.