China and Russia have vowed to strengthen cooperation to prevent chaos or war from erupting in Central Asia following the riots in Kazakhstan, their shared neighbor. 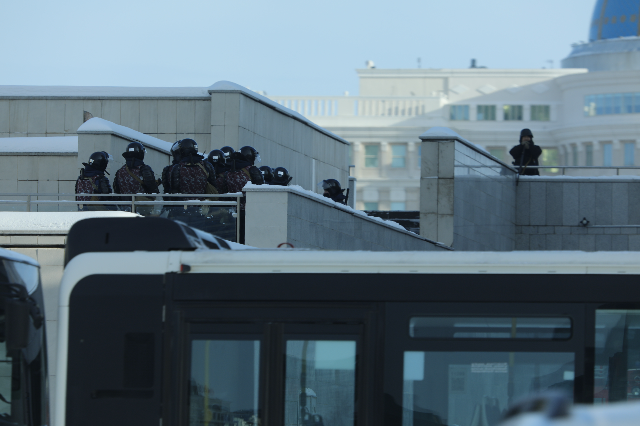 China and Russia have vowed to strengthen cooperation to prevent chaos or war from erupting in Central Asia following the riots in Kazakhstan, their shared neighbor.

State Councilor and Foreign Minister Wang Yi and Russian Foreign Minister Sergey Lavrov made the pledge in their telephone conversation on Monday. They talked about bilateral ties and exchanged views on the situation in Kazakhstan.

Lavrov introduced the assessment of the situation in Kazakhstan made during the recent summit of the Collective Security Treaty Organization, saying that it has become increasingly clear that the current chaos in the Central Asian country is being orchestrated by external forces.

Noting that this assessment also accords with that of Kazakh President Kassym-Jomart Tokayev and the Central Asian country, he said the situation in Kazakhstan has improved significantly since the CSTO sent peacekeeping troops to the country at Kazakhstan's request.

The CSTO is an intergovernmental military alliance in Eurasia that consists of six former Soviet republics-Russia, Armenia, Kazakhstan, Kyrgyzstan, Tajikistan and Belarus.

Wang said that China agrees with President Tokayev's assessment on the nature of the riots, and supports the CSTO in assisting Kazakhstan in fighting violent terrorist forces and playing a positive role in restoring stability in the country on the premise of respecting its sovereignty.

President Xi Jinping sent a message to Tokayev on Friday in which he expressed China's firm opposition to any attempt by external forces to provoke unrest and instigate a "color revolution" in Kazakhstan.

China and Russia, as permanent members of the United Nations Security Council and friendly neighbors of Central Asian countries, must prevent chaos or war from erupting in Central Asia, Wang said.

He underlined the need for the two countries to consistently strengthen coordination and cooperation to jointly oppose external forces interfering in the domestic affairs of Central Asian countries, and guard against unrest provoked by a "color revolution" and the three evil forces of terrorism, separatism and extremism.

Both countries should leverage their own strengths to help Central Asian nations with pandemic response and economic development in order to eliminate the risk of social turbulence, Wang said.

China supports the Shanghai Cooperation Organization in strengthening coordination and cooperation with the CSTO to jointly address various challenges to regional security, he added.

On bilateral ties, Wang said China will continue to firmly intensify strategic coordination with Russia to safeguard both countries' legitimate rights and interests and uphold world peace and stability.

Russian President Vladimir Putin's visit to China and his attendance at the opening ceremony of the Beijing Winter Olympics will not only be the first in-person meeting between the Russian and Chinese heads of state in nearly two years, but also a major event in international relations at the start of this year, Wang said.