The FIFA World Cup Qatar 2022 officially kicked off on Sunday. The two large screens hanging at the Lusail Stadium were made by a company in Shenzhen, Guangdong.

Lusail Stadium covers an area of 190,000 square meters and can accommodate more than 80,000 spectators. It is the largest stadium for the World Cup 2022 and is also the venue for the final.

Different from the screens in other stadiums, the screens in the Lusail are designed to be hung up in the air. The construction is much more difficult. 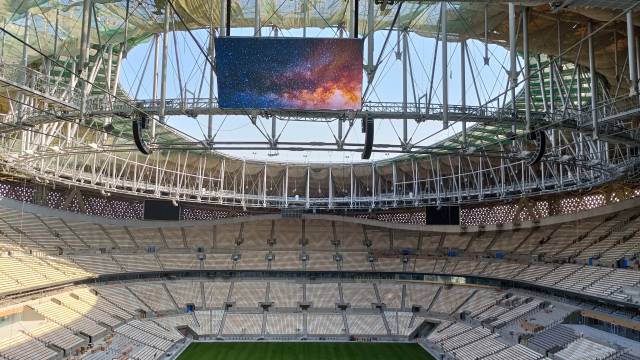 The big screen in Lusail Stadium.

A company from Shenzhen, Unilumin Group Co., spent nearly three months to develop the screens suitable for the Lusail Stadium.

The screens finally made is very light, which facilitates the installation. These ultra-high brightness screens are with 10,000 nits, so that the audience can still see the screen clearly under strong light. Moreover, these screens dissipate heat quickly, and can work stably even in the high temperature. Also these screens with special refresh rate design can avoid moiré, the distortion seen when viewing a screen through a TV, allowing the audience watching the game on TV to also see the screen of the stadium clearly.

Unilumin's LED display is at the Etihad Stadium.

It is not the first time that Shenzhen screens have been used in international competitions. In the previous World Cup Russia 2018, screens made by the company were used in 5 venues. The LED displays they made were also placed at the Etihad Stadium, home of Manchester City.