Having worked in Nansha as an accredited lawyer of Macao for more than two years, Cheng Ka Man, a Macao practicing lawyer, was licensed to be one of the first Guangdong-Hong Kong-Macao Greater Bay Area (GBA) lawyers this year. Now she can not only practice Macao law, but also practice law on civil and commercial cases in the nine mainland cities of the GBA. 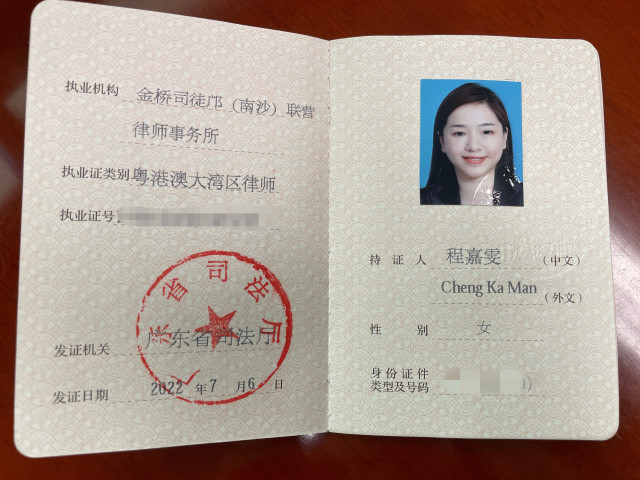 On July 6, 2022, the Guangdong Provincial Department of Justice issued Lawyer's License of the People's Republic of China (Guangdong-Hong Kong-Macao Greater Bay Area) to 4 Hong Kong and Macao lawyers, who have received training from the Guangdong Lawyers Association and passed the examination for practice in the GBA. Cheng is one of them.

“As a pilot mechanism for coordinating different legal rules in the Guangdong, Hong Kong and Macao, the GBA lawyer mechanism has facilitated the mobility of legal professionals within the GBA,” said Cheng.

In June 2022, the State Council issued a plan to promote cooperation with Hong Kong and Macao by further opening up Nansha. It indicates that a slew of measures will be made to establish a rule connect mechanism among Guangdong, Hong Kong and Macao.

As the GBA is characterized by One Country, Two Systems, and Three Jurisdictions, it's a challenge to enhance mutual recognition of legislation, law enforcement, and judicial systems when it comes to furthering integrated development. Thus, the GBA lawyer mechanism plays its role of coordinating different legal rules in the Area.

The plan also brings more business opportunities for Hong Kong and Macao people to develop in Nansha. Cheng shared the story that some of her clients from Macao want to do business in the mainland while they are not familiar with the laws, regulations, and administrative affairs here. “Since I have the GBA lawyer license, they have started coming to me.”

Cheng explained that these clients usually reach Hong Kong or Macao lawyers they used to know to assist them in their development in the mainland, as these lawyers can take advantage of their expertise in English and Portuguese languages.

“A better mutual recognition of legal rules of Guangdong, Hong Kong, and Macao will further streamline procedures for many livelihood affairs and increase the mainland's appeal for more Hong Kong and Macao residents.” said Cheng.

In order to facilitate connections with Hong Kong, the Guangzhou Nansha Service Centre has been established on the 9th floor of Hong Kong Wan Chai Shui On Centre in Hong Kong on July 20. The Centre promotes exchanges with Hong Kong in such fields as finance, sci-tech innovation, shipping and logistics, and professional services by liaising with associations of commerce and industry as well as international organizations in Hong Kong.