5 detained by Guangdong and Australia police for transnational drug smuggling

More than 100 kilogram crystal meth have been seized by Guangdong and Australian police in mid-March, according to a press conference held by Guangdong Provincial Public Security Department today, Mar

More than 100 kilogram crystal meth have been seized by Guangdong and Australian police in mid-March, according to a press conference held by Guangdong Provincial Public Security Department today, March 27.

During this joint-operation, 5 suspects were detained by Guangdong and Australian police, with 2 from Australia and Fiji.

It is estimated that the market value of those crystal meth is about 30 million RMB.

Video shows that Guangdong police how to crack down the drug smuggling ring in Chinese mainland. 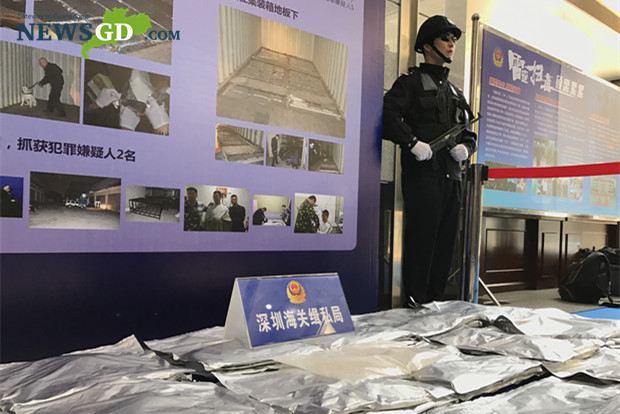 According to Deng, the “Controlled Delivery” is a common cooperation for hitting transnational drug smuggling. It is referred that the drug which under Guangdong police’s control was still shipped to the destination so that the Australian can arrest the receivers.

“Guangdong police have plenty of experience on ‘Controlled Delivery’ with the authorities in the U.S. and Australia,” Deng indicated. “Under this mode, the drug ring can be fully cracked down.”

Deng affirmed that Guangdong will keep hitting drug smuggling and cooperate with more countries in the future.

Chen Jianwen, director of Anti-smuggling Bureau of Guangdong Customs, indicated that passengers enter or exit with drug is one of the common methods for drug smuggling.

According to Chinese Criminal Law, people smuggle, sell or produce more than 50kg drugs, such as heroin and crystal meth, will be sentenced at least 15 years in prison, life imprisonment or death penalty.

Guangdong police also reminded that don’t help strangers to carry something you don’t know when entering or exiting China.