​In one month, the 2022 Beijing Winter Olympics will begin. On January 4, to welcome the Winter Olympics, Guangzhou is hosting the first Guangdong-Hong Kong-Macao Greater Bay Area Ice and Snow Cultural Festival in the Guangzhou Sunac Snow Park in Huadu District.

In one month, the 2022 Beijing Winter Olympics will begin. On January 4, to welcome the Winter Olympics, Guangzhou is hosting the first Guangdong-Hong Kong-Macao Greater Bay Area Ice and Snow Cultural Festival in the Guangzhou Sunac Snow Park in Huadu District.

This cultural festival will last until April, spanning more than three months and covering the pre, middle and late stages of the Beijing Winter Olympics. Various types of cultural activities will be held, including competitive sports, sports industry, sports culture and other aspects.

A number of themed events will be held during the festival, including the South China Ice and Snow Storytelling Meeting. This meeting will invite China's renowned respiratory disease expert Zhong Nanshan, Cao Xue, mascot designer of Winter Olympics and other 13 people to share their stories with the Winter Olympics. 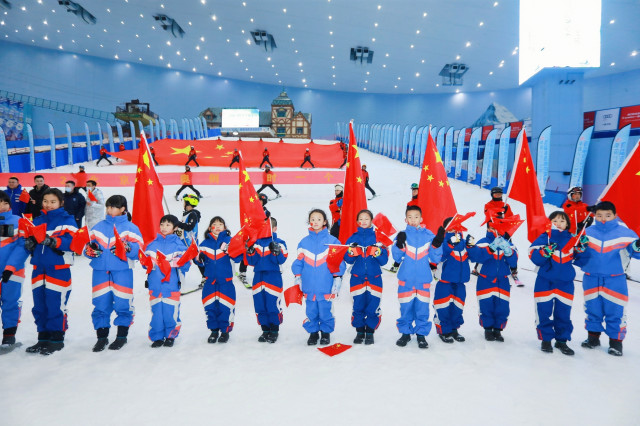 It is worth mentioning that teenagers in Guangzhou will also have the opportunity to participate in more ice and snow sports through this cultural festival. For example, they can participate in the Guangdong-Hong Kong-Macao Greater Bay Area Ski Elite Challenge in Guangzhou, which is the first high-level mass ice and snow event in the Greater Bay Area. Professional athletes will also experience the joy of sports with teenagers. Activities such as "Olympic stars talk about the Olympics", "Learning to ski with Olympic champions" as well as ice and snow fun camps will also be launched during the cultural festival.

Guangzhou is also building real ice rinks, imitation ice rinks and imitation snow rinks in large stadiums. In addition, new technologies such as VR, AR, dry snow and liquid simulated ice have also been used in the construction of more ice and snow venues. Guangzhou Sunac Snow World became the certification base for social ski instructors in Guangdong Province. It also cooperates with the British Ski Association BASI, one of the four major ski teaching systems and training institutions in the world, and students in Sunac can obtain the BASI international certificate.