In mid-August the Cold Spring Harbor Laboratory in the United States and Guangzhou Development District signed a memorandum of cooperation to jointly establish a research institute, a scientific and t 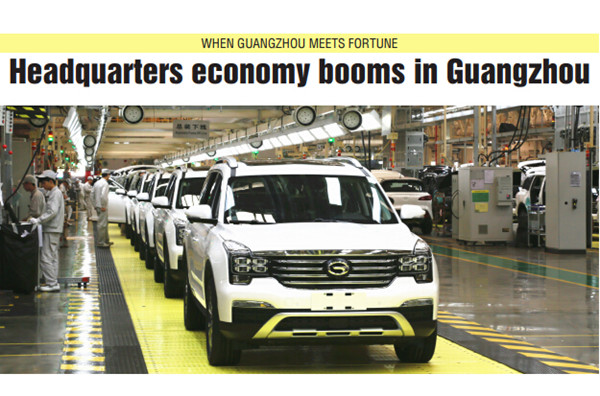 In mid-August the Cold Spring Harbor Laboratory in the United States and Guangzhou Development District signed a memorandum of cooperation to jointly establish a research institute, a scientific and technological achievement transformation center and a biomedicine industry fund.

The laboratory, which has been home to eight Nobel Prize laureates, focuses on research programs of cancer, neuroscience, plant genetics, genomics, and quantitative biology.

Earlier than that, AsiaInfo, a first Chinese NSDAQ company and the telecommunications software and IT services provider, established its South China regional headquarters and global data headquarters to the city’s Nansha district.

A place of headquarters economy will certainly be a gathering place of high-caliber talents. The different districts of Guangzhou have each rolled out their own incentive policies to woo and retain talent individuals. The Guangzhou Development District, for example, offers academicians, Nobel Prize winners and PhDs of world-renowned universities a maximum of 10 million yuan settling-in allowance and a project support fund of 200 million yuan.

Also, in its effort to boost the headquarters economy, Guangzhou gives priority to the emerging industries of strategic importance by implementing a plan to develop projects of new generation information technology, artificial intelligence and biomedicine (IAB) and creating a number of industrial clusters valued at 100 billion yuan.

A batch of leading IAB projects of such companies as Foxconn, Cisco, GE, BeiGene, AsiaInfo and GAC have broken ground since January this year. The total investment involved amounted to nearly 100 billion yuan. In 2016, the output value of the IAB sectors was estimated at 472 billion yuan.

Guangzhou is also formulating a five-year action plan and striving to make the output value of its IAB industries hit one trillion yuan by 2021. The plan was revealed at a press conference on August 2 on Guangzhou becoming a pilot city for the nation’s “Made in China 2025” strategy.

These efforts, however, are considered far from enough by the Guangzhou authorities. This year, they also proposed to build Guangzhou into a city most favored by global enterprises for investment and development, vigorously pushing the headquarters economy, and attracting more multinationals, state-owned and private enterprises to set up headquarters and launch key projects in the city.

Guangzhou recently was rated as an alpha-level city, along with Melbourne, Washington D. C. and San Francisco, in the World Urban System Rankings released by the Globalization and World Cities Research Network (GaWC), which represents a recognition of Guangzhou's headquarters economy.

According to GaWC's grading criteria, the more international institutions related to advanced producer services are distributed in a city and the higher their grades are, the higher scores the city will get.

"With South China's ever growing status in the global economy, multinationals tend to move their advanced producer services to the region to improve efficiency, and Guangzhou naturally becomes their top choice in South China," said Xue Desheng, director of the Center for Urban and Regional Studies, Sun Yat-sen University. "Meanwhile, the local institutions of advanced producer services have also grown stronger and expanded their global influence, further consolidating Guangzhou's status."

Clay Chandler, Time Inc. International Executive Editor said at promotion of the 2017 Fortune Global Forum in Shanghai, “We can’t take a better place or moment to draw the globe's attention to China and all the changes and innovations that are happening in China.”