The New International Land-Sea Trade Corridor has extended to 13 provincial-level administrative regions in China such as Chongqing, the provinces of Sichuan, Zhanjiang in Guangdong province and Huaihua in Hunan province, to form a faster alternative for western Chinese provinces and autonomous regions to transport goods to ASEAN countries, other than via the east coast. 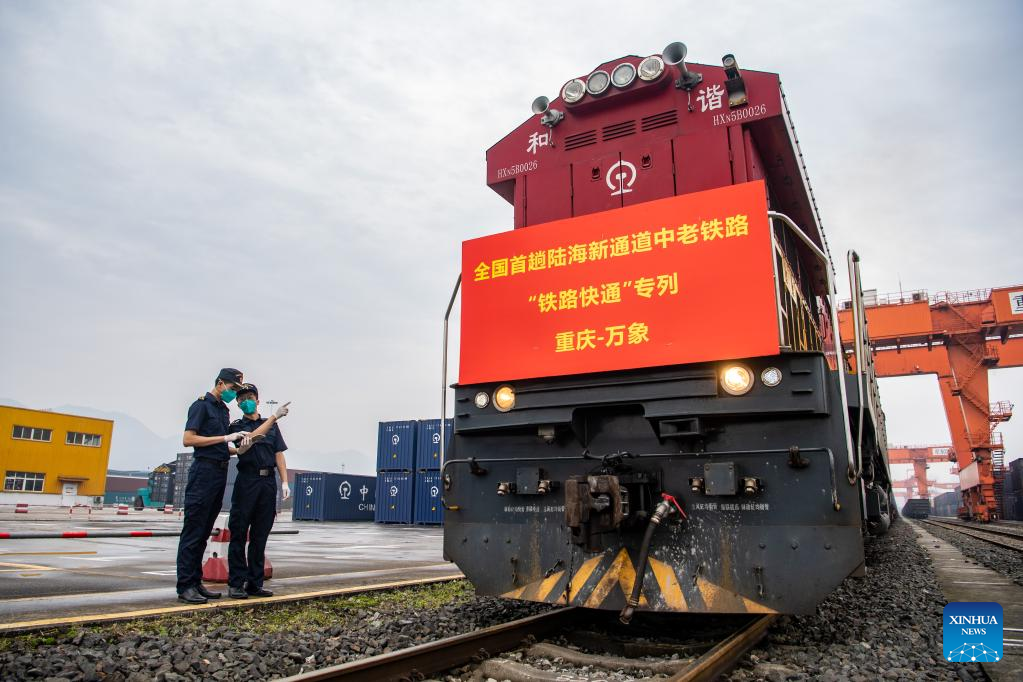 Customs officers inspect a China-Laos cargo train before its departure in Chongqing, May 21, 2022. [Photo/Xinhua]

The New International Land-Sea Trade Corridor, a major trade channel between China and the Association of Southeast Asian Nations, is expected to further strengthen connectivity between central and western Chinese regions and ASEAN member states, according to experts and government officials.

That will inject more vitality into China's pursuit of the dual-circulation development pattern-which takes domestic market as the mainstay while letting domestic and foreign markets reinforce each other-and will also make more contributions to stabilizing global industrial and supply chains, they said.

Mainly co-built by provincial-level regions in western China and ASEAN member states, the corridor has expanded its reach to 319 ports in 107 countries and regions, thanks to constant improvements in infrastructure networks, said a report on the development of the corridor in the past five years. It was jointly released on Friday by the Chinese Academy of International Trade and Economic Cooperation and the Coordination Center for Logistics and Operation of the New International Land-Sea Trade Corridor in Chongqing.

It has extended to 13 provincial-level administrative regions in China such as Chongqing, the provinces of Sichuan, Guizhou and Hainan, as well as Zhanjiang in Guangdong province and Huaihua in Hunan province, to form a faster alternative for western Chinese provinces and autonomous regions to transport goods to ASEAN countries, other than via the east coast.

Unveiled at an assembly for interprovincial consultation and cooperation on the corridor, the report said the new land-sea trade passage has become a major logistics pathway to shore up international cooperation of China's central and western regions to new highs through logistics network expansion and significant enlargement of trade, capital, personnel, information and technology flows.

"The construction of the new international land-sea corridor will help form a complete land-sea combined transport network within Asia, which is of great significance for China's economic and energy security," said Gu Xueming, head of CAITEC, at a forum on high-level co-construction of the corridor held on Saturday in Chongqing.

Yu Xiang, deputy head of the department of Asian affairs at the Ministry of Commerce, said the ministry will promote alignment of the corridor's development and growth strategies of countries alongside it on the basis of respecting interests of all stakeholders, so that resources, industries and production factors will be built up alongside the corridor to promote joint and high-quality development of countries and regions engaged.

That will set a good example to advance the improvement of modern connectivity and the construction of a closer community with a shared future among China and ASEAN members, Yu said.

Chen Wenling, chief economist at the Beijing-based China Center for International Economic Exchanges, said at the forum that the trade corridor has strengthened connectivity between China and foreign markets given the newly formed network of railway, highway and water transportation routes and a modern logistics system.

Many foreign enterprises have also expressed their confidence in the development prospects of central and western regions in China, especially with the opportunities and supply chain convenience created by the corridor.

Wang Lei, global executive vice-president of AstraZeneca and president of international business and China operations, said the company has been transporting large amounts of goods from Switzerland to Chongqing via the China-Europe Railway Express services since 2017, and transportation efficiency has been much improved.