Guangdong's added value of industries above the designated size up 3% in Jan.-Oct.

According to Guangdong Provincial Bureau of Statistics, in the first ten months of this year, Guangdong's added value of industries above the designated size hit 3.21 trillion RMB, a year-on-year increase of 3.0 percent.

At the same time, the total import and export volume reached 6.83 trillion RMB, an increase of 1.9 percent over the same period last year. 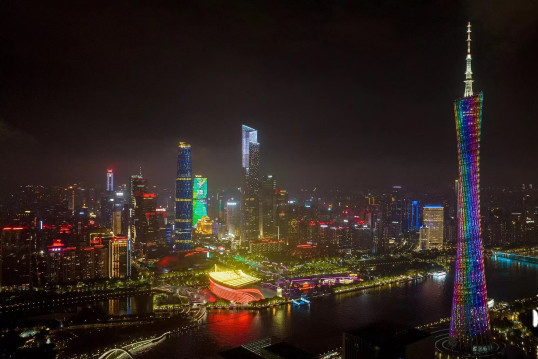 Compared with the data of the first three quarters, the growth rate of total imports and exports of goods went up by 0.6 percent. Investment in advanced manufacturing and high-tech manufacturing witnessed an increment of 25.6 percent and 32.0 percent, respectively.

In the first ten months, Guangdong's imports and exports amounted to 6.83 trillion RMB, a year-on-year increase of 1.9 percent and 1.3 percent over the first three quarters. Guangdong's exports mounted by 6.8 percent. In October, the province's total import and export volume increased by 7.2 percent. Among them, exports grew by 16.5 percent, the highest monthly growth rate this year. Affected by this, port cargo throughput rose by 1.1 percentage points, and container throughput grew at the same rate as in the first three quarters.

In the first ten months, the total retail sales of consumer goods in Guangdong were 3.73 trillion RMB, an increase of 2.4 percent year on year, with a rise of 4.2 percent in October, continuing the recovery trend. In October, Guangdong's consumer price index (CPI) rose 2.0 percent yearly, down 0.6 percentage points from September.