This is not a “re-writing” by either the Chinese mainland or Hong Kong Special Administration Region, but more of a correction. The history has already been written by people who seem to have their own conflicting views whether HK was a colony or wasn’t.

Hong Kong is being accused of re-writing its own history, it’s even been alleged that it’s distorting history and that China refuses to acknowledge Hong Kong’s colonial past. These are interesting and clickbait headlines which draw the reader into a much more complicated story, one that’s not being given full coverage in Western media. This is not a “re-writing” by either the Chinese mainland or Hong Kong Special Administration Region, but more of a correction. The history has already been written by people who seem to have their own conflicting views whether HK was a colony or wasn’t.

This is not a new or even a recent issue. In 1972, China requested the United Nations remove Hong Kong and Macao from a list of colonies as they did not recognise the legitimacy of the unfair treaties. The UN voted to do so by a vote of 99–5. The first mention in serious academic literature that China never considered Hong Kong to be a colony, was by Professor Wang Gungwu in his book the Revival of Chinese Nationalism, first published in 1996, prior to Hong Kong’s handover.

Although it seems, to suit certain parties, who relish in stirring up the youth of Hong Kong, this long ago decided fact, is currently being revived by the likes of HK Watch’s Benedict Rogers and the former (and last) Governor, Chris Patten and then amplified in media reports as we approach 25 years since the handover, the half way mark in the 50-year period in which China promised to maintain administrative separation from the mainland under the One Country Two Systems policy.

There’s absolutely no doubt in the minds of British people however, that Hong Kong was a colony but it’s the meaning of “colony” that seems to be causing the consternation. According to the BBC:

“Britain first took over Hong Kong island in 1842, after defeating China in the First Opium War. After the Second Opium War, Beijing was forced to also cede Kowloon in 1860, the area on the mainland opposite the island.

In 1898, to enforce its control of the area, the UK leased additional land, known as the New Territories, promising to return them to China in 99 years” (Grammar and punctuation errors are the BBC’s).

The Oxford English Dictionary defines a colony as a country or area under the full partial political control of another country and occupied by settlers from that country. 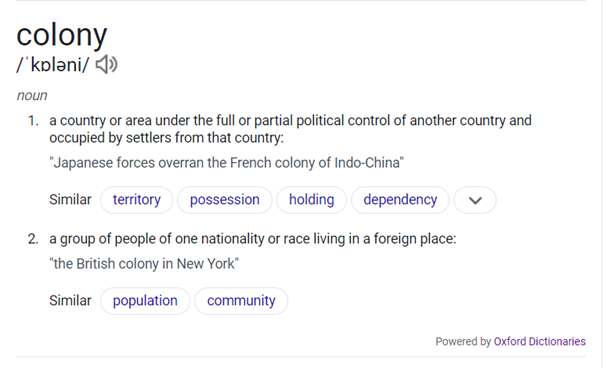 So, now we can understand Britain’s confusion: in one widely accepted definition Hong Kong was taken as a prize after a war with a promise to return — a definition the BBC prefers. In another, written by academics, it’s a place under total or partial control of a foreign government, which Hong Kong definitely was, from 1841 (or 1842 according to the BBC, presumably because that was the date the treaty of Nanking was signed) until 1997 but in 1972 the United Nations changed their opinion leaving Britain, and a few other countries confused.

A recent news article written by Britain’s Ben McIntyre, he concedes that the treaties were unfair but that Britain exercised sovereignty, not just governance over Hong Kong. It also states that China would attempt to “…deny Britain’s part in Hong Kong’s Story”, which would be grossly unfair, China has very much included Britain’s part in the story, but included it in a more realistic way than Britain would like to be seen and remembered.

From its very first colony Newfoundland in 1583, the British Empire obtained around 100 colonies all around the world. The handover of Hong Kong was not the first nor will it be the last colony Britain has lost. In fact, all around the world, from Aden to Zimbabwe (Rhodesia when it was a colony), many colonies have stepped away from British governance and influence. The most recent was Barbados in November 2021.

Aden and America, went to war, India presented Britain with a peaceful but forceful struggle where they clearly demonstrated the will of the people was independence. Australia, New Zealand, Canada and others did so by popular vote.

What’s important here is that all those colonies that have left the British empire have one of two things in common: they either went to war against the British Empire winning their freedom or they made an agreement with the British Empire after a popular vote expressing the wishes of the majority of their people.

Hong Kong did neither; and it’s this which makes Hong Kong different. If Hong Kong was a colony and was entitled to the same rights, the same conditions and the same treatment as other colonies, why then were Hong Kong citizens denied the right of a vote on their future?

There really is only one answer to the question and that is because the British always knew that after 99 years, the land, the territory and the people of Hong Kong would be returned to China. For 156 years of their existence, the people of Hong Kong were subject to British rules, British laws and British administration, at no time did they ever go to the polls to vote for their Governor. The last Governor, Chris Patten did instigate voting which took place for the first time ever in 1991, just 6 years before handover. Until 1991, the people of the region had never elected an administrator, any judges (appointed by the UK) or even their local council members, 150 years of no representation at all.

Some now also accuse China of “dismantling Hong Kong’s hard-won freedoms”. Nothing could be further from the truth.

In 1956, the “double10 riots” saw the loss of 60 lives. When the riots were quelled, it was by the intervention of British military forces. Ten years later the “Star Ferry Riots” saw one death, 13 civilians and 10 police officers injured, once again after the intervention of the British military. The Anti-British riots of 1967 saw 51 people killed and 832 injured and, more recently, the 1981 riots where some disenchanted youths were involved in protests and met with police violence. These protests carried on throughout the 80s. 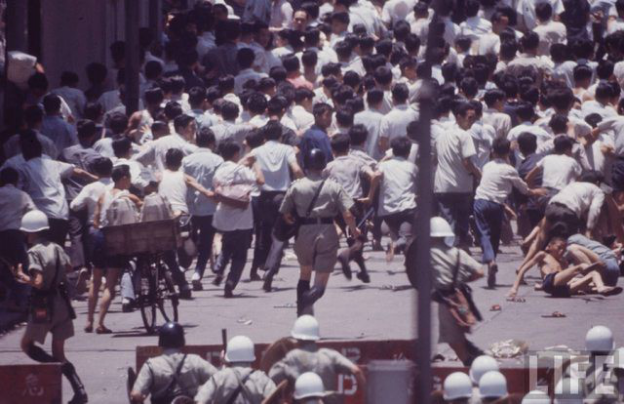 While it certainly seems the people of Hong Kong have fought long and hard for freedoms which have been significantly denied to them by the British government using aggressive British policing tactics and the crushing, brutal support of the British military, one thing is for sure; there are no signs that democracy was ever a part of Hong Kong’s past. So, whether that past be defined as a colonial or an occupied past seems to be a moot point: the United Nations decided the two SARs of Hong Kong and Macao were not colonies under their interpretation and 99 members agreed with China at that time. Britain might well maintain that they were since Hong Kong was under British rule by British people to suit British conditions but the international community of 1972 would beg to differ.

What is much more important is that the people of Hong Kong have, and continue to have stability to live their lives, to work in their jobs, to travel freely in, around and outside of their region, and to vote for their lawmakers without experiencing interference from people who have no right to interfere in a part of the world they temporarily controlled but voluntarily and arbitrarily handed back to its rightful owners 25 years ago.

It’s also important that, like the children of Britain and the children of every other sovereign nation, that Hong Kong’s children are educated in the history of their region that most reflects the truth. And, it is for this reason that the role of Britain in Hong Kong’s history should not be denied, nor should it be glossed over as a benevolent period of history where local people lived happily under the benign administration of a wonderful king or queen — it needs to be remembered and taught exactly as it was. A difficult period where Chinese people were allowed the opportunity to live under a British system which allowed them no freedom of speech, no democratic rights and, for the vast majority of them, very few opportunities for them to better themselves whilst any complaints were met with violent police crackdowns supported by brutal, and lethal military force.

And that’s the real history that British books won’t tell us about.