13th CPC Guangdong Provincial Congress started in Guangzhou on May 22

The 13th Guangdong Provincial Congress of the Communist Party of China (CPC) kicked off in Guangzhou on May 22.

The 13th Guangdong Provincial Congress of the Communist Party of China (CPC) kicked off in Guangzhou on May 22. 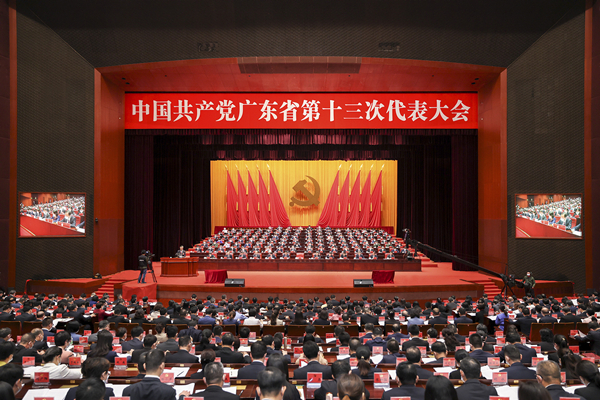 According to the report delivered by Li Xi, the secretary of the Guangdong Provincial Committee of the CPC, Guangdong has made progress and gained achievements in various aspects over the past five years.

Li pointed out in the past five years Guangdong saw the reinforcement the Party's leadership and political foundations, the continuous economic strength growth, important progress in reform and opening up, more coordinated urban-rural developments, development of cultural sector, optimization of ecological environment and law based governance. People are having a better and safer life and the society enjoys a stronger capacity to deal with risks.

As for the following five years, Li pointed out that the province will seize the opportunities of the development of the Guangdong-Hong Kong-Macao Greater Bay Area (GBA), the support to Shenzhen to build a demonstration area of socialism with Chinese characteristics, the development of the Guangdong-Macao In-depth Cooperation Zone in Hengqin and Qianhai Shenzhen-Hong Kong Modern Service Industry Cooperation Zone, Shenzhen Comprehensive Pilot Reforms, and building a highland of talent in GBA, with a target to make progress in the reinforcement of the Party's political foundations, high quality development, further reform and opening up, civilization, ecology, people's well-being and social governance.

To hit the target, the province is going to focus on nine key tasks.

First Guangdong will further promote the development of the GBA, the Shenzhen demonstration area of socialism with Chinese characteristics, and the Hengqin and Qianhai Cooperation Zones. It will develop both "hard connectivity" of infrastructure and "soft connectivity" of rules and standards, so as to build a world-class bay area and city cluster.

In terms of the high-quality development, the province will build a more internationally competitive modern industrial system, expand domestic demand and stabilize foreign trade to create a strong market advantage, and fully enhance the construction of a modern infrastructure system.

In terms of high-level sci-tech development, it will build a technological and industrial innovation highland with global influence. It will explore a new system for tackling key core technologies R&D, and strengthen the chains to improve the overall efficiency of innovation.

It will seize the opportunity of building a highland of GBA talent to promote talent development, and speed up the construction of the whole process innovation ecological chain combining basic research, making technical breakthroughs, achievement commercialization, scientific and technological financing, and talent support.

The province will make effort to achieve carbon peaking and carbon neutrality goals. It will fight against pollution, and to build a beautiful Guangdong with green mountains and fresh air.

Guangdong will insist on resolving the most pressing difficulties of the people. The province will enhance employment quality and raise people's income. It will build a high-quality education system and further develop health services and social security system.

Lastly, it will build the province into one of the best regions in China in safety, stability, fairness, and legal environment. Guangdong will balance development and security, and to fully forestall and defuse major risks. It will push forward law-based governance and maintain a stable and orderly society.