Video | How does a train driver help goods export in the GBA?

“We’re like ‘small parts’ along the trading rail of Guangdong and ASEAN countries. Hundreds of thousands of parts together inject strong impetus into the cross-border transportation, thereby expediting goods flow and promoting trade cooperation between Guangdong and ASEAN countries,” said Zhang Zhiping, the driver of the maiden ‘Jiangmen’ China-Laos railway freight train , when sharing with GD Today about his story.

“We’re like ‘small parts’ along the trading rail of Guangdong and ASEAN countries. Hundreds of thousands of parts together inject strong impetus into the cross-border transportation, thereby expediting goods flow and promoting trade cooperation between Guangdong and ASEAN countries,” said Zhang Zhiping, the driver of the maiden ‘Jiangmen’ China-Laos railway freight train , when sharing with GD Today about his story. 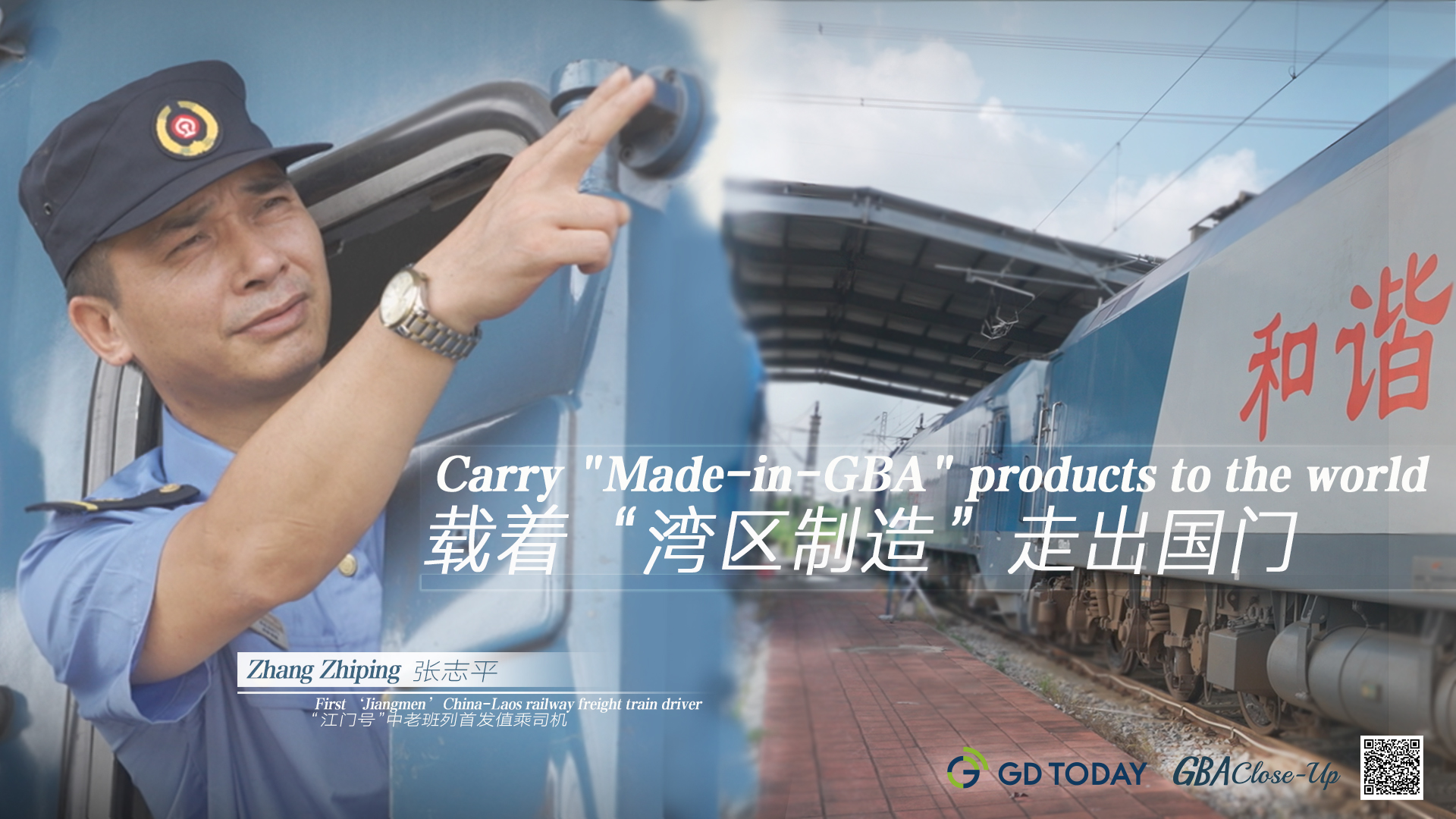 As the Regional Comprehensive Economic Partnership (RCEP) agreement, the world's largest free trade agreement, entered into force on January 1 this year, the trade cooperation between Guangdong and ASEAN countries through cross-border freight trains has been further facilitated.

On March 16, the 1st China-Laos railway freight train ‘Jiangmen’ was launched. This is a new route linking Guangdong and ASEAN countries. Together with China-Europe freight trains, more goods made in China are shipped to countries along the route.

The 1st China-Laos railway freight train ‘Jiangmen’, bounded for Vientiane, capital of Laos, pulled out from Jiangmen North Railway Station as planned in the middle of March.

With a total length of over 2,400 km, it is expected to arrive at Vientiane in seven days. And Zhang Zhiping was the driver on duty for the first section of the whole journey, from Jiangmen North Railway Station to Jiangcun Station.

“At 3 am, I pulled out the locomotive from Jiangcun and arrived at Jiangmen North Railway Station at dawn (around 6 am). Afterwards, 35 containers at the freight yards were immediately hoisted into position. By noon (around 12 pm), the train stopped at Jiangcun marshalling-free yard,” he recalled.

The train was fully loaded with electronic products, daily necessities, and light industrial goods from Jiangmen and nearby cities, which are very popular in Laotian market.

“With the opening of Guangzhou Nansha Port Railway and Guangzhou International Port, there are more and more China-Laos/Europe freight trains. Thus, the number of transportation tasks is increasing,” he said.

According to latest statistics released by the Guangdong Sub-administration of the General Administration of Customs, the number of international freight trains from Guangdong to Central Europe, Central Asia, and southeast Asia reached 472, an increase of 117.5% year-on-year in the fist seven months of 2022.

The dedicated worker in the city

Over the past 28 years, Zhang has been sticking to his post and registered a safety mileage of 400,000 kilometers. He also had a career trajectory across the Guangdong-Hong Kong-Macao Greater Bay Area (GBA), such as, Guangzhou-Maoming Railway, Guangzhou-Zhuhai Railway, Guangzhou-Shenzhen Railway and Guangzhou Nansha Port Railway.

During his long career life, Zhang Zhiping has established himself as one of the best drivers in terms of the freight transport. And he had taught more than 100 apprentices.

In the eyes of Hu Weiping, one of Zhang’s apprentice at Jiangcun Railway Operation Workshop, Zhang is rigorous, hard-working and has a very high sense of responsibility.

“He has not only taught me how to drive but also how to behave myself well in life. I really learned a lot from him,” said Hu.

Sometimes the time he can spend with his family is limited. Luckily, he has gained continuous understanding and support from his wife and daughter.

Looking into the future, he said he will continue improve his skills, pass down the spirit of the ‘locomotive’ and contribute to the safe and smooth cargo transportation on the rail of the Greater Bay Area.