A silver pheasant, which is a China national Class II protected species, accidentally entered the Zhenlong switchyard of Guangzhou Metro on April 26.

A silver pheasant, which is a China national Class II protected species, accidentally entered the Zhenlong switchyard of Guangzhou Metro on April 26. The bird has been sent to the Guangzhou Wildlife Rescue Center after a 14 hours rescue. 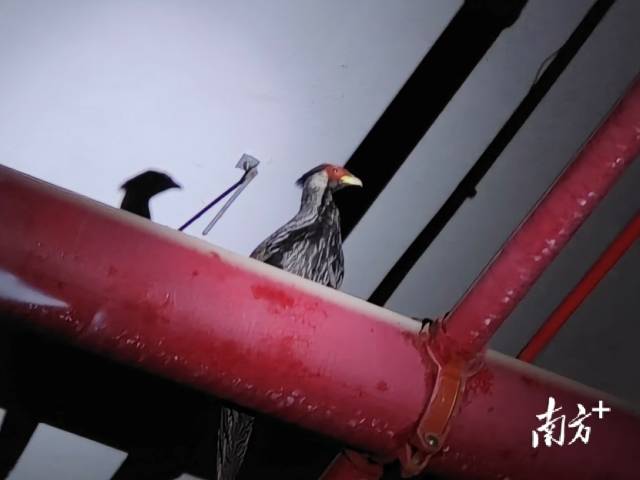 “The bird with a length of about 50 centimeters stood in the middle of the 7B rail. Please handle immediately,” reported Ma Sijie, a driver at the Zhenlong switchyard at 4:03 pm on April 26. He halted the train 15 meters away from the bird so that it would not be scared or hurt.

When Huang Hanchao, a staff member of the switchyard, came to help, the bird had flown up to a water tube close to the ceiling. Huang Hanchao found that the bird has a crest with a bare red face and brown feathers, which looks like an endangered species he had read about in a  book before.

Huang Hanchao reported it to the Bureau of Forestry and Landscaping of Guangzhou Municipality, Guangzhou Municipal Public Security Bureau and Guangzhou Wildlife Rescue Center asking for help, and was guarding the bird until the rescue workers arrived. In addition, Huang arranged spare trains for evening Metro peak so that he could avoid trains running under the bird.

“This is a wild male silver pheasant, which is a national Class II protected species and the provincial bird of Guangdong,” the rescue worker arrived at 7:20 pm and recognized it immediately. The rescue team found the silver pheasant weak, and its life would be at risk if it were not rescued in time.

The switchyard stopped dispatching trains in related region and cut the electricity for safety. The rescue team also trained the staff members of the switchyard before the rescue. However, their attempts failed again and again as the bird dodged alertly.

At 6:40 am on April 27, the staff member of the switchyard surprisingly found the bird resting on the floor near the entrance. They successfully guided it into a cardboard box with holes on it and fed it with bread, corn and sweet potatoes.