The 2022 China’s Integrated Circuit Industry Forum was held in Nansha from June 25 to 26, during which Nansha district of Guangzhou, released 9 advantages to boost the development of the chip industry.

The 2022 China’s Integrated Circuit Industry Forum was held in Nansha from June 25 to 26, during which Nansha district of Guangzhou, released 9 advantages to boost the development of the chip industry.

Dong Ke, head of Nansha District, addressed the opening ceremony and highlighted that chip projects landed in the district can enjoy 9 new advantageous policies in addition to the national supportive measures as well as the “four chains policies” which were launched earlier to boost the development of innovation chains, industrial chains, supply chain finance and talent chains. 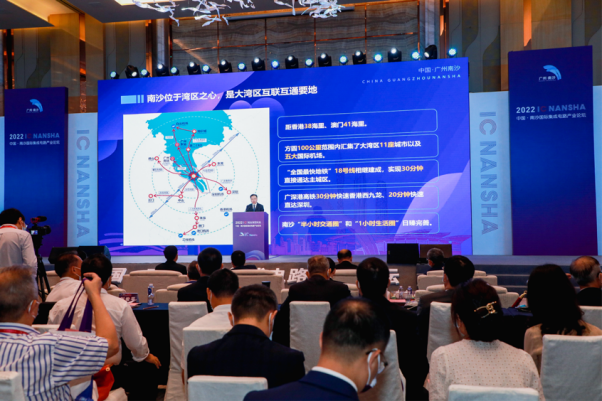 (2) Support enterprises in constructing public service platforms. In accordance with 30 percent of the actual investment, a one-time subsidy up to 30 million RMB will be given.

(3) Support in tape-out. In accordance with 50 percent of the actual expense on tape-out, an annual subsidy up to 20 million RMB will be given.

(4) Encourage enterprises to use EDA tools and IP. Based on 30 percent of the actual cost, a subsidy up to 1 million will be given.

(6) Discount interest on loans. For enterprises involve in global industrial chains or major national projects, 50 percent of the actual expenditure interest and a loan discount up to 5 million RMB will be given.

(7) Support enterprise in financing. For enterprises that have obtained fund financing, 30 percent of the financed amount will be subsidized, with 50 million RMB as the utmost follow-up investment. For listed enterprises, a maximum reward of 10 million RMB will be given.

(8) Support enterprises in taking AEC-Q testing. 50 percent of the testing fee will be given to the enterprises, with 1 million RMB as the maximum.

(9) Support the coordinated development of industrial chains. For enterprises in Nansha to purchase products or services from non-affiliated enterprises, subsidies shall be given at 5 percent of the actual purchase amount, with a maximum of 3 million RMB.

Dong added enterprises settled in Nansha could enjoy major fiscal and tax policies apart from the 9 policies for chip industry since China’s State Council has recentlyissued a Plan for the district.

“On the one hand, enterprises specializing in the encouraged industries will enjoy a reduced cooperate income tax of 15 percent in the three launching areas of Nansha. On the other, the loss carry-forward period is further extended for enterprises in the key high-tech industries,” he said.

In addition, the Plan for Nansha vows more support in funding and production factors.“An annual local government debt of 10 billion RMB will be arranged to support the development of Nansha from 2022 to 2024. The annual land use quota will also be increased in the district,” said Dong.

“At present, Nansha is pressing ahead the implementation of these policies, so that more enterprises can enjoy the benefits," he said.

In recent years, the IC industry has thrived in Nansha. With a number of leading enterprises – such as Accopower and Linlux Electronics – settling in the district, Nansha has taken the lead in China to build a full industrial chain for wide-bandgap semi-conductors, which covers design, manufacturing, packaging, testing and materials. Moreover, Nansha has a 1.97-square-kilometer IC industrial park and a 2.1-billion-RMB venture fund for semi-conductors and integrated circuits.

According to Chen Yudong, president of Bosch China, the national policies and regional policies such as the 9 advantage policies for chip industry have attracted enterprises’ attention to Nansha.

“Nansha has created an attractive business environment regarding its supportive measures, tax incentives and living environment, which is key to the talent-oriented IC industry,” said Chen, “Bosch China is considering landing its South China R&D and manufacturing center in Nansha, and the specific plan is under negotiation.”