A sharing salon of the 4th Cross-Straits Youth Creative Short Film Contest was held on September 26, with winners of the 24-hour video-editing Challenge announced at the salon. Yang Kaihang and Wu Jiantao from the Guangdong competition zone won the first place in this challenge.

A sharing salon of the 4th Cross-Straits Youth Creative Short Film Contest was held on September 26, with winners of the 24-hour video-editing Challenge announced at the salon. Yang Kaihang and Wu Jiantao from Guangdong won the first place in this challenge. 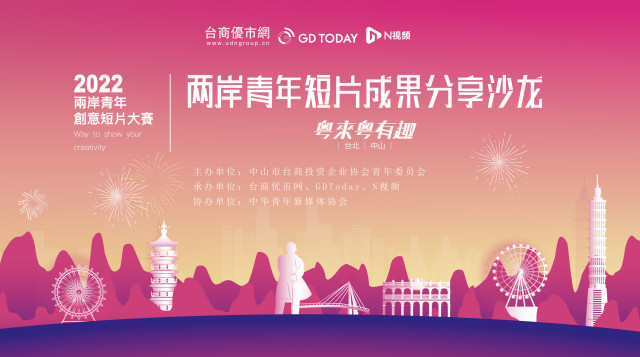 At the salon, young contestants from Guangdong and Taiwan shared their ideas about participating in the competition and producing short videos.

"I was deeply impressed with the museum of Dr. Sun Yat-sen. During the filming, I encountered a group of children recording a video of poetry reading. I think it’s meaningful so I recorded it immediately." Tang Yongjun, a player from Guangdong province, shared his experience about the 24-hour challenge, "This is a test of mental as well as physical strength."

After the first 24-hour video-editing Challenge, judges selected 100 videos from all entries of both sides, and then invited the previous contestants to edit and produce short films for the 24-hour editing Challenge.

Chen Jiajun, a contestant from Taiwan, found various urban elements of Zhongshan and Taipei in the selected 100 wonderful videos. When reviewing his editing process, he said that he hoped to bring these interesting scenes together as much as possible. He also added: "How this competition was held is very new to me. And it is a challenge for us to observe the people and things around us from a different angle."

Then let's take a look at these excellent works.

(7 videos with Excellence award, names not listed in order)

This event is organized by the Youth Council of (Zhongshan) Taiwan Business Investors Social Association and undertaken by udngroup.cn, GDToday and N-Video. Besides, the simultaneous live broadcast is accessible during the game on the Yuexuexi App, N-Video and the website of udngroup.cn.

*The Winners of the Video Clip Award