The British government insists on its Rwanda asylum scheme, despite the criticism at home and abroad. But why does London choose to "outsource" asylum seekers to Rwanda? Is it really a "humane policy" that "will save lives and prevent injuries"?

Ukrainian refugees face being deported to Rwanda if they travel to the UK without authorization, said British Prime Minister Boris Johnson before the Commonwealth Heads of Government Meeting. Previously, UK's first flight carrying asylum seekers to Rwanda was grounded due to an urgent interim measure from the European Court of Human Rights (ECHR).

UK Home Secretary Priti Patel called ECHR' ruling ''disappointing and surprising''. ''We believe that we are fully compliant with our domestic and international obligations, and preparations for our future flights and the next flights have already begun,'' said Priti Patel in a statement.

The British government insists on its Rwanda asylum scheme, despite the criticism at home and abroad. But why does London choose to "outsource" asylum seekers to Rwanda? Is it really a "humane policy" that "will save lives and prevent injuries"?

The deportation of asylum seekers was based on UK's Migration and Economic Development Partnership with Rwanda, signed in April 2022. It contains a five-year ''asylum partnership arrangement'', which allows the UK to relocate those who have their asylum claim deemed as inadmissible to Rwanda for processing under Rwanda's asylum system. In return, the UK is providing £120 million funding to Rwanda and will continue to offer financial support as the programme progresses.

The scheme sparked global condemnation. UK's first Rwanda deportation flight was blocked by the ECHR on June 14. But the UK government stated that it will insist on the deportation scheme. Why?

As early as Boris Johnson was running for PM, he had unveiled a string of immigration reforms, promising to oversee a widespread immigration crackdown at Britain's borders. Last July, UK Home Secretary Priti Patel introduced the Nationality and Borders Bill in the House of Commons. The bill was approved by the British House of Lords on April 27 this year. It requires tightening border controls, cracking down on smuggling and especially, deporting ''inadmissible'' asylum seekers to Rwanda.

The United Nations Refugee Agency (UNHCR) has slammed the UK's Migration and Economic Development Agreement and Nationality and Borders Act for denying refugees their right to seek asylum in the UK and running counter to the spirit of the Refugee Convention and Global Compact on Refugees. (Notes:The 1951 UN Refugee Convention sets out the rights of individuals who are granted asylum and responsibilities of nations that grant asylum. The UK is one of the signatories. Based on the Refugee Convention, Global Compact on Refugees further provides path for the international community to cooperate under the framework of the United Nations and jointly solve the refugee problem.)

Besides, the legality of "outsourcing" refugees remains in doubt. The UK High Court will hold a hearing in July to rule on the legality of the Rwanda asylum scheme. Therefore, the ECHR has indicated to the UK Government that the asylum seekers should not be removed to Rwanda until three weeks after the delivery of the final domestic judicial decision. The ECHR also considered ''applicants on the deportation lists would face a real risk of irreversible harm'' and issued an order to cancel the flight under Rule 39 of the Rules of Court.

''People fleeing war, conflict and persecution deserve compassion and empathy,'' underscored Gillian Triggs, UNHCR's Assistant High Commissioner for Protection. ''They should not be traded like commodities and transferred abroad for processing.'' She pointed out that the UK was exporting its responsibility to another country, Rwanda.

''The proposed offshore processing centers would expose asylum seekers to real risks of forced transfers, extended periods of isolation and deprivation of liberty, violating their human rights and dignity,'' noted the UNHCR.

Are the asylum seekers to be sent to Rwanda really ''inadmissible''?

According to the asylum partnership arrangement between the UK and Rwanda, people who make a ''dangerous and illegal journey to the UK'' are considered ''inadmissible'' to the country's asylum system, including those who cross the English Channel in a small boat.

However, ''As the law presently stands, an asylum seeker who merely attempts to arrive at the frontiers of the United Kingdom in order to make a claim is not entering or attempting to enter the country unlawfully. Even though an asylum seeker has no valid passport or identity document, or prior permission to enter the United Kingdom, this does not make his arrival at the port a breach of an immigration law,'' said Lord Justice Edis, Mrs Justice May, and Sir Nicholas Blake in a 2021 Court of Appeals Ruling.

This indicates that the UK should not treat asylum seekers differently or call them "inadmissible" based on their way of entry to UK's border.

Nonetheless, on March 31, Conservative MP Bill Wiggin claimed on the Liaison Committee that the UK should only allow the entry of "right" people, such as wealthy Qataris, instead of the "wrong ones" who come in rubber boats. This statement severely violates the principle of "non-discrimination" of refugees in the Refugee Convention. 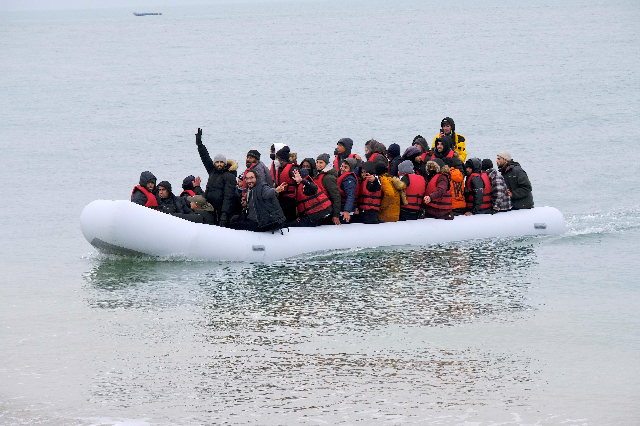 Asylum seekers were crossing the English Channel to the UK in a rubber boat on Novermber 24, 2021. (Photo/Xinhua)

Most refugees in the UK come from countries in the Middle East and North Africa, which are deeply mired in wars and poverty, while these predicaments are always accompanied by long-term interference from the UK and other Western countries.

When facing its own refugee and migrant issues, the UK chooses to ''be oblivious to the human rights standards and humanitarianism, of which it constantly claims itself to be the champion, it also shies away from responsibilities and even tries to ‘outsource' the asylum-seekers.'' Chinese Foreign Ministry Spokesperson Wang Wenbin commented on the Regular Press Conference, ''The UK government needs to ditch its arrogance and hypocrisy on human rights issues, and take serious actions to respond to the criticism and questioning from home and abroad.''