Humphrey Moshi, a Tanzanian economist of University of Dar es Salaam, spoke highly of the bilateral meeting at an interview with GDToday on November 3. He believes it will not only facilitate bilateral trade and increase Chinese investments in Tanzania, but also scale-up development aid to Tanzania.

Chinese President Xi Jinping held talks with visiting Tanzanian President Samia Suluhu Hassan in Beijing on November 3, during which the two heads of state announced the elevation of China-Tanzania relations to a comprehensive strategic cooperative partnership.

Humphrey Moshi, a Tanzanian economist of University of Dar es Salaam, spoke highly of the bilateral meeting at an interview with GDToday on November 3. He believes it will not only facilitate bilateral trade and increase Chinese investments in Tanzania, but also scale-up development aid to Tanzania.

“Whatever the western media said, we are the ones who know how we are benefiting from the cooperation with China,” said Moshi, “Tanzania has been active in the Belt and Road Initiative (BRI) and the Forum on China-Africa Cooperation (FOCAC), which contributed so much to our infrastructure and industrialization.” 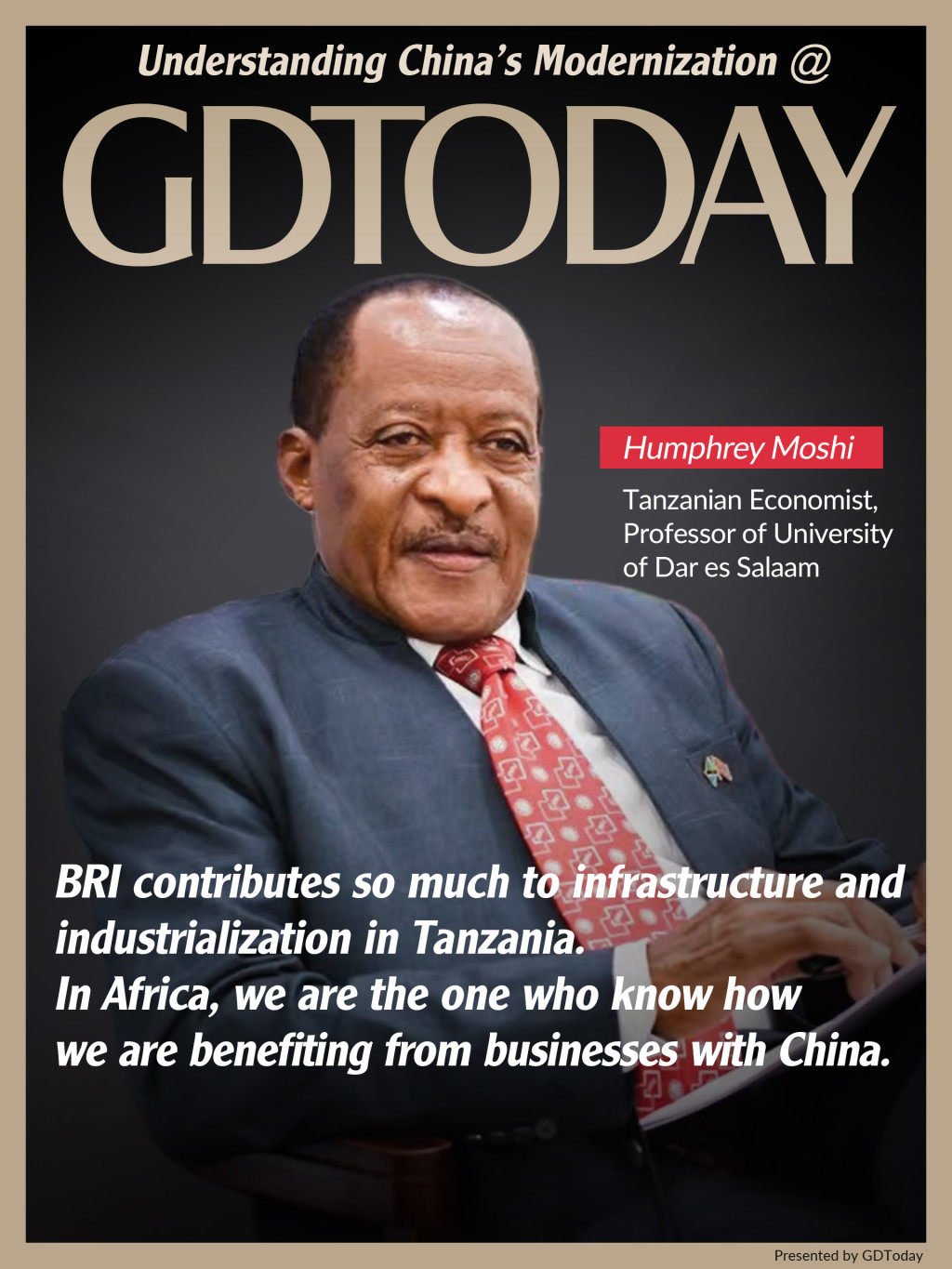 Infrastructure is key to economic growth in Africa

Moshi considers infrastructure a key focus of many Tanzanians on President Samia’s visit to China, saying, “Connectivity is a big problem in Africa and hinders trade activities even within the country. But with the BRI in place, we managed to build railways, bridges and airports, which effectively improved the connectivity and bettered the business environment of Africa,” he said.

As for future cooperation, Moshi highlighted the renovation of the TAZARA Railway which links the port of Dar es Salaam in Tanzania with Kapiri Mposhi in Zambia's Central Province. “TAZARA marks a milestone in China-Tanzania and China-Africa friendship. Now that the railway is 43 years old, we are looking for Chinese expertise in railway construction to modernize the project,” he said.

Based on the joint statement issued on November 3, China and Tanzania will deepen high-quality Belt and Road cooperation and actively advance the upgrade and renovation of the TAZARA Railway. The Chinese side will encourage more Chinese companies to invest in Tanzania and participate in infrastructure development.

“Infrastructure is fundamental to address challenges of poverty and foster economic growth. Some western media and officials accused China of laying ‘debt trap’ for African countries, which is an unfounded myth. The accusation is more about China-US strategic rivalry than a reflection of the reality and the African perspective,” said Moshi.

In a recent article written by Moshi, he quoted a 2018 study by Jubilee Debt Campaign, which shows that China owns only 20% of the debt owed by 48 African countries. The rest is owned by multilateral financial institutions (35%), private creditors (32%), and Paris Club members (13%), including the US, the UK and France.

“The World Bank’s 2022 International Debt Statistics has shown a similar result. If China is not the main creditor of Africa, how come the accusation saying that China’s lending practices have pushed African countries into ‘debt traps’,” he wrote.

Moshi read the report delivered by President Xi at the 20th National Congress of the Communist Party of China. He was impressed by the concept of modernization with common prosperity which stresses prosperity has to be inclusive and benefit all Chinese people.

The “Chinese path to modernization is different from what we used to see from the western countries. The western way focuses on profit maximization without taking care of everybody’s benefit, which will encourage inequalities and sustain poverty,” he elaborated.

Moshi considers Chinese path to achieve modernization is inspiring to developing countries which have long considered poverty is their destiny. “China shows us a different development paradigm through which it achieved rapid economic development and earned a lot of credibility. We can learn from Chinese modernization and adapt it to our unique social conditions,” he said.

“China has become the second biggest economy, the per capita income has increased to the average of about 12.6 thousand USD, comparing 113 USD in 1970s. The country also successfully lifted almost 800 million people out of poverty in 2021,” he added.

Future is bright despite of challenges

Moshi said the outcome of the visit is visible through the signing of 15 agreements and he believes the elevation of China-Tanzania relations to a comprehensive strategic cooperative partnership means that the two countries would, from now on, intensify their consultations and cooperation on a wider list of issues: domestic, regional and global.

“We have realized that the cooperation between China and Africa brings good results,” said Moshi and he quoted the statistics by Tanzania Commodity Commerce & Investment Co. that 1,098 investments from China were registered by the Tanzanian Investment Center up to October 2022. These projects are worth 9.6 billion USD and have created employment for about 300,000 people.

Moshi encourages more African countries to broaden cooperation with China but at the same time, they have to put the right policies in place and seize the opportunities considering their own conditions and challenges.