GZ+7970, Haizhu extends COVID measures for 5 days in some areas

Guangzhou held a press conference on the city's fight against COVID-19 today (November 23). "On November 22, Guangzhou reported 7,970 new local COVID-19 infections, of which 39 were detected outside the controlled areas. The remaining infections were detected during quarantine, in high-risk areas, or among key people under closed-loop management," said Zhang Yi, deputy head of the Guangzhou Municipal Health Commission.

Among the new cases, 7,735 were asymptomatic cases, and 235 were confirmed mild or moderate type cases.

At present, the epidemic outside the high-risk areas is generally stable, but the situation is still uncertain. Recently, the epidemic situation in the Fengyang's Jinzili area has been on the rise.

The new cases in Baiyun District were mainly concentrated in Taihe Town, Yuncheng Subdistrict, Zhongluotan Town, Tongde Subdistrict, and Helong Subdistrict. The source of some infections remains unknown, and there is a possibility of hidden transmission.

The epidemic in Huadu, Panyu and Conghua districts hasshown a tendency to rise. On November 21, abnormal test results were reported during nucleic acid screening, while mostly were non-local cases, and the risk is temporarily controllable.

Currently, Zengcheng District needs to pay high attention to two cluster of cases, among which the one that was caused by drivers who came to Guangzhou from another provincial-level region is still developing, and the other at a construction site is being dealt with.

Now, the epidemic in Yuexiu and Liwan districts is relatively stable.

In the past two days, 60 areas in 16 subdistricts, including Chigang, Jianghai and Nanshitou, have adjusted their risk levels or lifted temporary control, according to Su Mingqing, deputy head of Haizhu District.

At present, there are 172 high-risk areas, 16 low-risk areas and 47 temporary controlled areas in Haizhu. 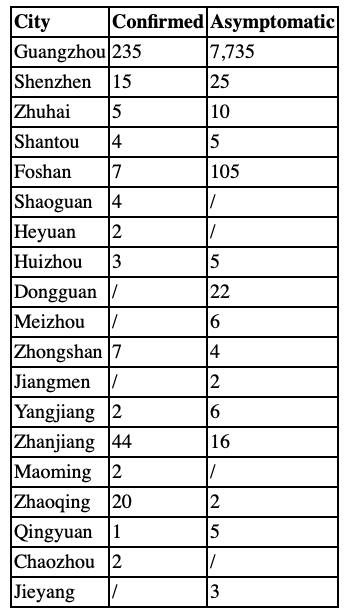 In addition, there were 507 local confirmed infections converted from previous asymptomatic cases (487 in Guangzhou, 16 in Dongguan, 2 in Zhanjiang, and 2 in Qingyuan).