The Guangdong Kaiping Diaolou is a defensive multi-storey tower-style building in villages. The Diaolou harmoniously coexists with the surrounding rural landscapes, and reflecting a complex and brilli 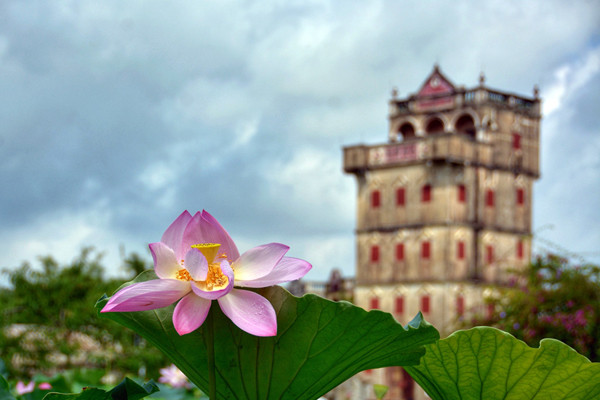 The Guangdong Kaiping Diaolou is a defensive multi-storey tower-style building in villages. The Diaolou harmoniously coexists with the surrounding rural landscapes, and reflecting a complex and brilliant integration of Chinese and western building structures and decorative forms. Guangdong Kaiping Diaolou and Villages were included in the World Heritage List on June 27, 2007.

The Kaiping Diaolou is located in Kaiping city, Guangdong province, and is a special vernacular building in China and is a multi-storey tower-style building that integrates defense, residence and art of Chinese and western architecture.

Kaiping is located between Xinhui, Taishan and Enping and was not administrated over by any of the four counties since the Ming Dynasty in 1368 and 1644. Therefore, it was a chaotic place with rampant bandits. In addition, there were many rivers causing numerous flood disasters when typhoons and storms hit, therefore the local villagers had to build the Diaolou for self protection.

Kaiping Diaolou and Villages feature the Diaolou, multi-storied defensive village houses in Kaiping, Guangdong province, which display a complex fusion of Chinese and Western structural and decorative forms. They reflect the significant role of émigré Kaiping people in the development of several countries in South Asia, Australasia, and North America, during the late 19th and early 20th centuries, and the close links between overseas Kaiping and their ancestral homes.

It represents an important interchange of human values physically - architectural styles brought back from North America by returning Chinese and fused with local rural traditions - within a particular cultural field.

The property inscribed consists of four groups of Diaolou, totaling some 1,800 tower houses in their village settings. They reflect the culmination of almost five centuries of tower-house building and the still strong links between Kaiping and the Chinese diaspora.

The building of defensive towers was a local tradition in Kaiping since Ming Dynasty in response to local banditry. Kaiping Diaolou represents the final flourishing of this tradition.

These buildings take three forms: communal towers built by several families and used as temporary refuge, of which 473 remain; residential towers built by individual rich families and used as fortified residences, of which 1,149 survive; and watch towers, the latest development, which account for 221 of the buildings. Built of stone, compressed earth, brick or concrete, these buildings represent a complex and confident fusion between Chinese and Western architectural styles. Retaining a harmonious relationship with the surrounding agricultural landscape, the Diaolou testify to the final flowering of local building traditions that started in the Ming period (1368-1644) in response to local banditry.