GBA Close-up| A French teacher self-challenges to study for Ph.D in Chinese

Recently, Frenchman Nicholas, who has lived in China’s Guangzhou city for many years, made an unprecedented decision in his life—to study for a doctorate in Chinese!

Recently, Frenchman Nicholas, who has lived in China’s Guangzhou city for many years, made an unprecedented decision in his life—to study for a doctorate in Chinese! This difficult and courageous decision meant that he would use standard Chinese to complete his study from the admission interview to the final paper publication.

Nicolas is a French teacher who has lived in Guangzhou Higher Education Mega Center for many years. In 2013, he came to China’s Hunan province and took a beautiful local girl as his beloved wife. In 2017, he brought his whole family to Guangzhou and settled in this lush and green city. And recently, he is studying for a doctorate at Guangzhou University.

Nicolas applied for the language psychology major of Guangzhou University and chose to use Chinese to complete his research. To improve language proficiency, he usually selects sentences from news or government documents, then keeps writing them on a notebook. Now he not only can use Chinese phonetic alphabet to type characters on a computer, but also can write them by hand.

After study, Nicolas is also his daughter's language teacher. "My daughter grew up in a tri-lingual environment," he said proudly. "I speak French to her, my wife speaks Mandarin, and my mother-in-law speaks Hunan dialect." Sometimes Nicolas will do small experiments, by trying to speak Chinese to his daughter. But every time his daughter gives a puzzled glance and asks, “Dad, why do you speak Chinese?" “This phenomenon is interesting,” he smiled. “I want to incorporate these observations into my Ph.D research topic.” 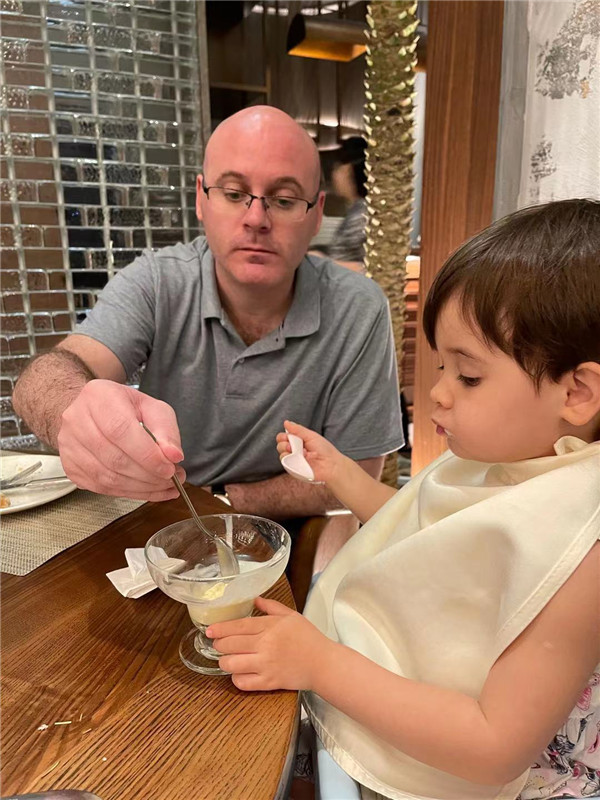 Nicolas is feeding his daughter with Cantonese syrup.(Photo provided to Newsgd.com)

Nicolas feels happy for the upcoming Chinese Teacher's Day. He said that there is no Teacher's Day in France. It was the first time he experienced the festival joy after he came to China. "Seeing my students pass the French higher education entrance exams, I feel happier than passing it myself," he said.

On this Teacher’s Day, Nicolas also has some words for his students. “Do not be diffident to speak. Language learning is?like a long stream of water, which depends on persistence.”