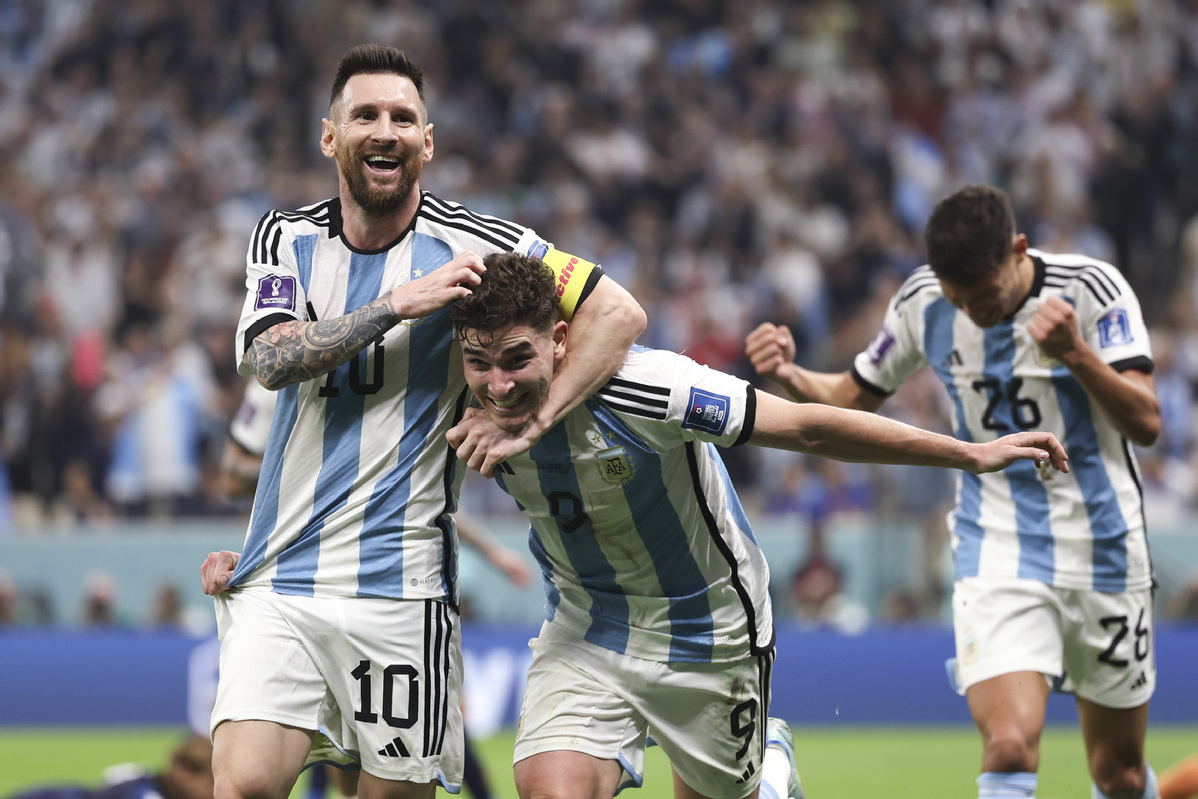 Argentina's Julian Alvarez (No 9) celebrates scoring their second goal with Lionel Messi (No 10) during the semi-final against Croatia of FIFA World Cup at Lusail Stadium, Lusail, Qatar, December 13, 2022. [Photo/Xinhua]

Messi put Argentina ahead in the 34th minute by rifling home from the spot after Croatia goalkeeper Dominik Livakovic clattered into Alvarez when he was through on goal.

Alvarez made it 2-0 when he gathered the ball in his own half before embarking on a brilliant solo run and bundling home from close range.

The Manchester City forward doubled his personal tally with a close-range finish after Messi twisted past his marker and crossed from the right byline.

It was another vintage performance from Messi, who seems a man on a mission in his fifth, and likely last, appearance at football's showpiece tournament.

Argentina will play the winner of Wednesday's other semifinal between defending champions France and Morocco in the final on Sunday.

Albiceleste manager Lionel Scaloni made two changes to the team that beat the Netherlands on penalties in the quarterfinals. Nicolas Tagliafico replaced the suspended Marcos Acuna at left-back while Leandro Paredes came in for Lisandro Martinez.

Both teams struggled to create danger early and it took into the 25th minute for the game's first shot on target: a low effort from Enzo Fernandez that was palmed away by Livakovic.

While Croatia dominated possession, much of it was in their own half, leaving Ivan Perisic and Andrej Kramaric mostly isolated in attack. Perisic created a nervous moment for Argentina's defense with some fancy footwork on the left flank and a chipped effort that floated narrowly over the bar.

Argentina went ahead in the 32nd minute after Luka Modric uncharacteristically lost possession. Fernandez then found Alvarez, who dinked a shot over Livakovic before being body-checked by the Dinamo Zagreb player.

Referee Daniele Orsato pointed to the spot and Messi thumped an unstoppable penalty into the top right corner.

Alvarez was proving too quick and energetic for Croatia's defense and he doubled the lead five minutes later with a barnstorming 50-meter run, leaving several defenders in his wake, before slotting home from point-blank range.

Messi and Alvarez continued to threaten early in the second half. The pair showed their growing chemistry as they combined on the edge of the 18-yard box before Messi fended off Josko Gvardiol and fired a shot straight at Livakovic.

The Paris Saint-Germain forward defied his 35 years with his scampering runs into the box and willingness to track back and defend. His energy was again on full display when he turned Gvardiol inside out on the right side of the box before cutting the ball back for Alvarez, who blasted an unstoppable first-time effort past Livakovic.

Paulo Dybala then came on for his first minutes at this World Cup as he replaced Alvarez. And the Roma forward nearly created Argentina's fourth goal shortly after, flicking the ball into the path of Alexis Mac Allister, who shot just wide of the right post.

Croatia had their share of possession in the second half but rarely troubled Argentina's defense. Mislav Orsic, Nikola Vlasic and Perisic all had speculative attempts on goal that were either easily saved by goalkeeper Emiliano Martinez or missed the target.