​The Guangdong-Hong Kong-Macao Greater Bay Area (GBA) is serving as an important hub in China's "dual circulation" economic strategy and will usher in a new tide of construction and development with the promulgation of the Qianhai and Hengqin plans, according to William Huang, Managing Partner of China South, Ernst & Young (EY).

According to 2022 Guangdong government work report released on January 20, this year Guangdong will further develop the GBA, and enhance Guangdong's role in pushing a "dual circulation" development pattern, letting internal and external markets boost each other. GDToday & Southcn.com invited a senior executive from Ernst & Young to share his insight about the region's further opening up as follows.

The Guangdong-Hong Kong-Macao Greater Bay Area (GBA) is serving as an important hub in China's "dual circulation" economic strategy, letting internal and external markets boost each other, and will usher in a new tide of construction and development with the promulgation of the Qianhai and Hengqin plans, according to William Huang, Managing Partner of China South, Ernst & Young (EY).

Being a world-renowned professional services organization that has been active in the Greater China Region for more than 50 years, EY has been growing its business in the GBA in recent years and helping clients seize GBA opportunities across different sectors.

"The GBA is looking forward to a deeply integrated, open and innovative, smart and green future," said William, who holds a positive view on the region's prospects.

GBA is a good pilot area for cross-boundary connectivity

William pointed out that EY actively worked with the government in implementing policies and plans and providing solutions for further exploring the opening up in the economic field.

William suggested that under the premise of controllable risks, the government could further develop cross-border financial exchange services, including the interconnection of talents, and accelerate the establishment of a diversified financial market in the GBA.

Also, it is possible to consider pilot work to promote the establishment of a mediation mechanism for resolving cross-border financial disputes in Guangdong, Hong Kong, and Macao. In addition, some technological and digital methods can be used to strengthen financial data management and make further investments and guidance in network security. 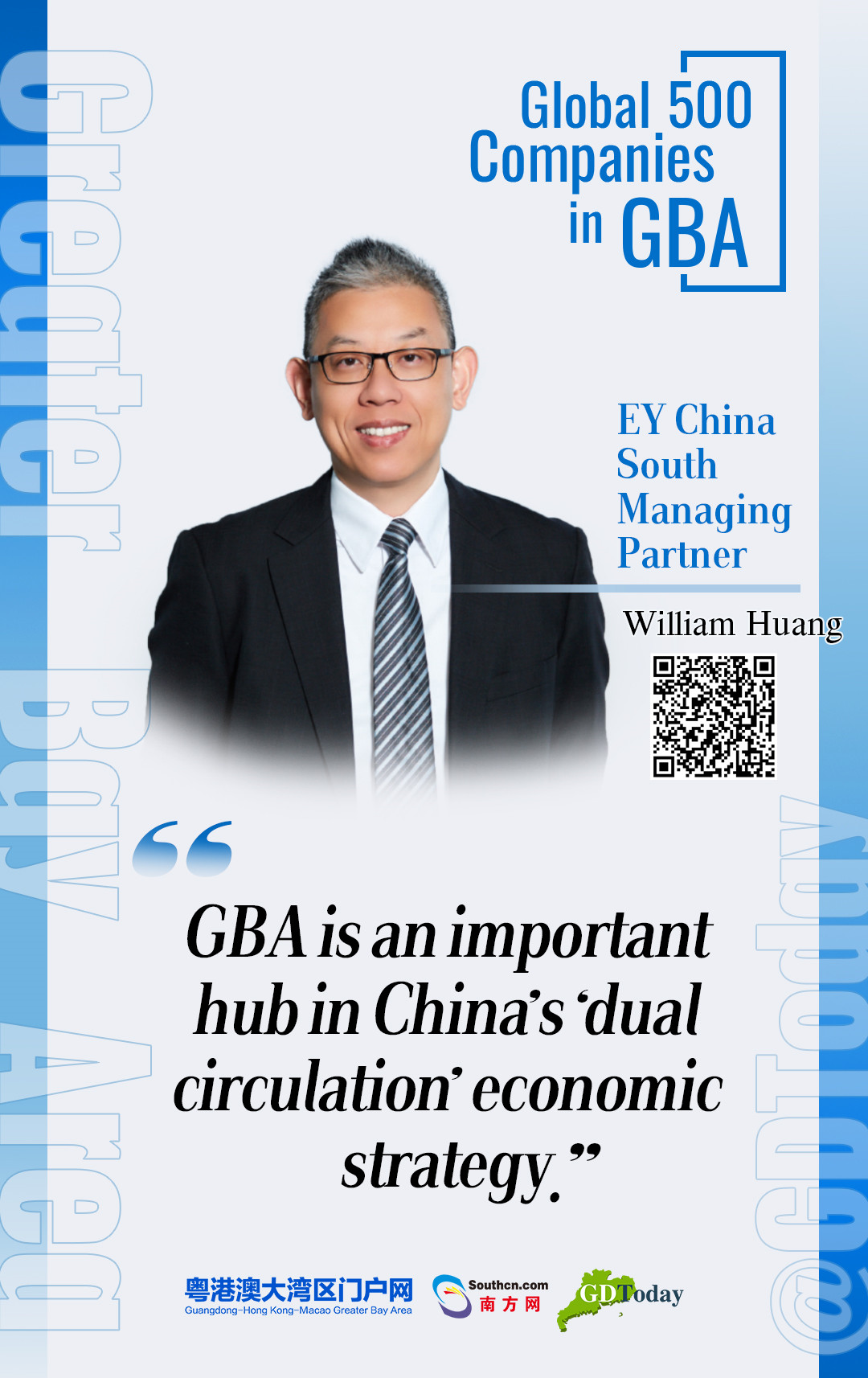 Set up a work team to better serve the GBA

"With talents, an innovation atmosphere, a free market, and an industrial cluster of advanced manufacturing, the GBA has fulfilled all the conditions for success." said William.

In recent years, GBA has done a lot of work in these areas, for example, more facilitation measures have been launched to enable practitioners from Hong Kong and Macao in the financing, taxation, law, tourism, medical care and other fields to qualify to work in GBA mainland cities.

At the end of 2020, EY set up a work team targeting the GBA and signed a Shenzhen-Hong Kong young talent exchange cooperation agreement with Shenzhen's Luohu District to attract Hong Kong professionals and youth to work and study in the Chinese mainland.

"Talent flow and cooperation is the key to GBA's long-term innovative development," William stated. "Besides governments, more enterprises should get involved in. And that is what EY is working towards."

Guangdong has always been at the forefront of China's reform and opening up. Thus, enterprises in the province have a long history and rich experience in participating in international competitions.

William suggested that these companies strengthen the reserve of professional talents, especially those with international business skills. In addition, they can also consider more use of capital markets for direct financing.