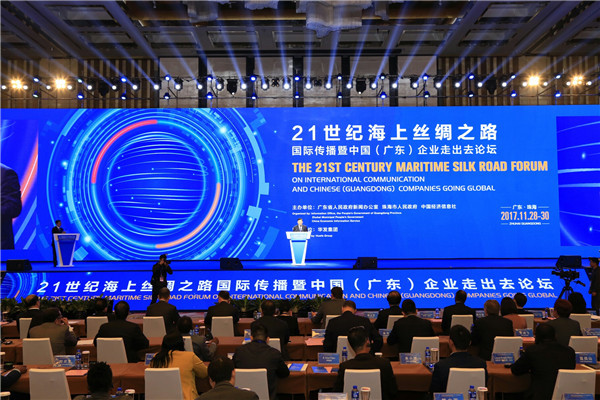 Shen also made a keynote speech where he indicated that holding the forum is a step toward Guangdong taking action in accordance with the spirit of CPC’s 19th National Congress and Belt and Road Initiative, also implements President Xi’s important instructions as to the work required of Guangdong.

Economically speaking Guangdong is a key province, with strength in media and internet development. In recent years Guangdong has been particularly focusing on establishing platforms for cultural exchange and communication, especially for media cooperation, playing a role in enhancing international understanding, trust and consensus and broadening consultation, contributions and sharing benefits with the world. 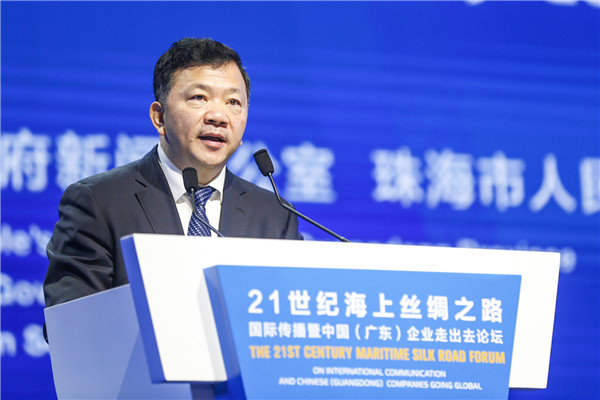 Shen Haixiong, a standing committee member of the CPC Guangdong Provincial Committee and head of Guangdong's publicity department, makes a speech during the opening ceremony of the forum. [Photo provided to Newsgd.com]

According to Shen, guilded by Xi Jinping Thought on Socialism with Chinese Characteristics for a New Era, Guangdong will seize new opportunities in the new era and actively shoulder its own duties. It will comply with the changes in media communication in the new age of the Internet and make contributions to accelerate the Belt and Road Initiative, helping strategies come to fruition in those countries and regions, "the initiative allowing friendly cultural communication along the Maritime Silk Road".

Officials from related ministries of the central Party and government, responsible persons from Guangdong's publicity department and Zhuhai’s CPC committee and municipal government, representatives from the general consulate of foreign countries in Guangzhou, officials from international organizations, famous scholars, responsible persons from famous companies and media from home and abroad attended the ceremony.

Before the ceremony, Shen met with Jean-Paul Peuskens, Vice-Governor of the Province of Limburg in Belgium, discussing trade, cultural communication and cooperation between the two provinces. Guangdong and the Province of Limburg initiated a sister province relationship in 2015 under the watchful gaze of both Chinese President Xi Jinping and Belgian King Filip Leopold Lodewijk Maria (Philippe Léopold Louis Marie).