What's wrong with the US?

When we look deeper, the human rights issues in the US are so starkly different from the perception it portrays as a “beacon”. Frighteningly different. Here’s what we can find if we take the time to search.

China has been, variously described as a rising power, a sleeping dragon and a collapsing economy. Most of the rhetoric is driven from the US. Inside their government, both the Senate and Congress have anti-China hawks, their State Department seems to see a threat at every turning point and their military seems to believe that a defensive People’s Liberation Army is a bad thing as it threatens US interests. Books, reports and documentaries are created about mass dissatisfaction which extended academic research seems unable to identify.

In short, “experts” think it’s about to collapse, people in power think it’s a huge threat, but academics who study China understand China’s rise is peaceful and solidly based.

On the other hand, there are a lot of things to criticize the US about. They even provide statistics to help us. Many in the US see this as one of their best features; they say they’re open about their problems and can accept criticism.

It’s certainly not true that the US accepts criticism. In a country that claims it values freedom of speech, they simply suppress it. This was evidenced by the interview with Mark Zuckerberg a few days ago on Josh Rogan’s show. He clearly stated Facebook have the ability to suppress or block information; on that occasion, it was because the FBI asked them to.

Americans can openly criticize, which is good, and even insult their leaders. They can vote but nothing an individual does will make a change.

In the 1950s and 60s, the “American dream” was a dream worth pursuing, but during the latter half of last century, things started changing. Imagine for a moment if the 1950s’ and 60s’ incredible infrastructure and growth had continued. What the US was doing then is what China does now, investing in the health and wealth of its nation so that its people benefit and expanding investments overseas for mutual benefit.

In the last few years particularly, there have been some sinister and dark changes. When you search online with the right questions and do a little digging, it’s easy, and terrifying, to find how deep and how bad the rot is.

A recent article in GDToday called “The Dark Side of the Beacon” relates to human trafficking abuses in the US. Whiles the US prides itself on being a "beacon of democracy" and a "protector of human rights," the GDToday article points out, it’s downright dark, especially for the victims.

Every year the number of human trafficking cases increases. This is a multi-billion-dollar global crime business, according to the United Nations, and it is worth about $150 billion annually. In the US, thanks to their transparency, we know it affects tens of thousands of people, from as young as 1-year-old. 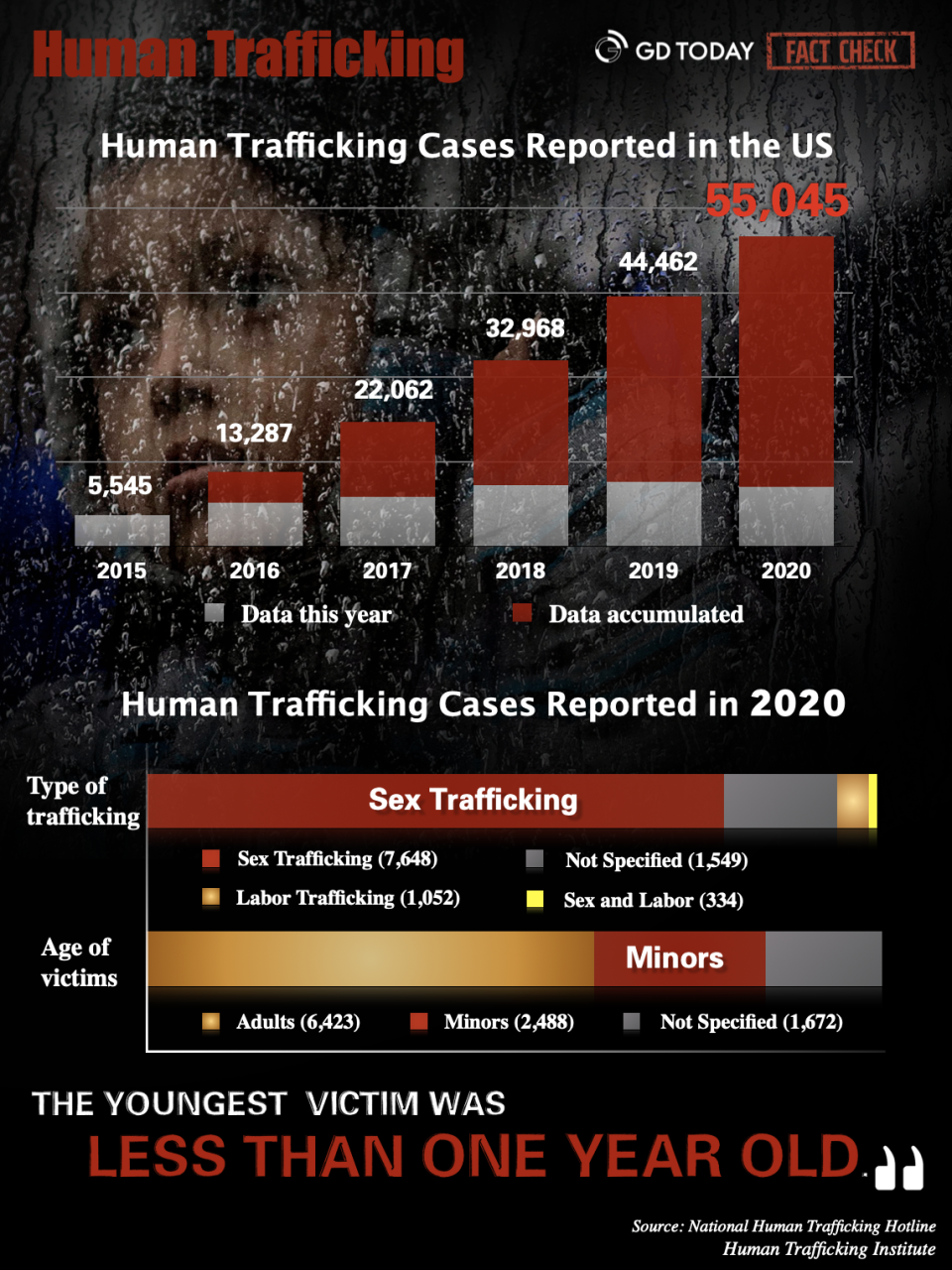 When we look deeper, the human rights issues in the US are so starkly different from the perception it portrays as a “beacon”. Frighteningly different. Here’s what we can find if we take the time to search.

They speak badly of China’s police as authoritarian, yet Chinese police officers don’t kill people: In the last 5 years, only 2 people on the Chinese mainland have been shot by police, one in 2019 and one in 2018, and both were using vehicles intent on killing or injuring others. In the first 7 months of this year alone, the number in the US was 631, and in five years, the number is over 5,000 and, sadly, increases every year. From 2015 to August 2022, 40% of the victims of fatal police shootings were Black Americans.

They spend billions on drug enforcement every year while the number of drug addictions and drug-related deaths increase; from March 2020 to March 2021, 96,779 people died of drug overdoses; and among Americans aged 12 years and older, there are more than 37 million known illegal drug users as of 2020, more than 13% of Americans 12 and over.

They accuse China’s government of being authoritarian when the US, with less than 5% of the world’s population, holds over 20% of the entire world’s prison population. The US has 698 people per 100,000 incarcerated, compared to China’s 121/100K.

The number of Black prisoners in the US prison system at 1240 per hundred thousand is 5 times greater than the proportion of Whites. In every US state and in every category, Whites are imprisoned less than Black and Hispanic/Latino Americans.

US accuses China of using forced labour, a claim which remains unproven, while using their own incarcerated prisoners as almost unpaid and involuntary employees in a legalized  (under their constitution) system of slavery.

They speak of themselves as being the land of the free point to spurious allegations of human rights abuses while locking up thousands of families and separating children from their mothers on their borders. They can arrest and imprison suspects without trial, rendition them to “black sites” where they are able to use torture techniques which are legalized but renamed “enhanced interrogation”.

They talk of “inhumane lockdowns” in China, where people are regularly delivered free food, free Covid testing and free hospital care if tested Covid positive. More than a million of their own population have died, compared to less than 6,000 in China, and 23 million Americans may face an uncertain future due to long Covid complications.

They praise this medical system but charge so much that over 530,000 people declare bankruptcy every year because of the costs.

They accuse China of intellectual property theft when their own science is years behind. At the same time, their FBI advises that US IP theft is not just growing but already massive, requiring the formation of a Property Rights Coordination Centre in the US.

They allege China won’t share space technology and science when they have legislated to stop NASA sharing with China.

They speak of corporate crime in China while it was the US which almost brought the world to its knees, and created global financial crises through corporate crime which, for the most part, remain unpunished. And closer inspections reveal US corporations are directly responsible for many of the worst corporate crimes in the 21st century.

They claim to support a free market economy while they sanction over twenty countries, hundreds of companies and thousands of individuals.

They accuse China of propaganda while they budget 300 million dollars a year for negative media reports on China and have proposed a further half billion a year.

They speak of freedom of speech whilst locking up lawyers for finding guilt in their oil executives and journalists for reporting international crimes committed by their military. Those crimes are which the International Criminal Courts can’t investigate or prosecute because they’ll be sanctioned, or even invaded if they do.

They boast of their liberty and freedom but have shot and wounded over 115,000, and over 45,000 people died last year alone from their private guns.

They are the richest country in the world with a per capita GDP that is 485% of the world’s average but a poverty rate of 11.4% and over half a million people living on the street.

They claim to be a country of equality but White Americans hold 85% of the wealth while Black Americans hold just 4.1%. The rest is shared amongst Native Americans, Asian and Hispanic Americans.

They have the world’s best universities but American people can’t afford to study, or, when they do, they incur a lifetime of high interest debt which they can never default, even through legal bankruptcy.

34 million people in the US don’t have enough food, but its government spends billions on their own military and gift many more billions to Israel and several other countries.

They accuse China of military proliferation when only one Chinese military site exists overseas, and it is used in cooperation with US troops in the same region, Djibouti. At the same time, the US has over 750 bases and nearly 200,000 troops stationed overseas.

They allege China is militarizing the South China sea when they have an American “self-defense force” including two of their own, and two other aircraft carriers as well as about 70 other ships sailing off or near the coast of China.

Their military, with the exception of the National Guard, can’t operate inside US due to the Posse Comitatus Act but, when they do, it is to defend the government against the people. While Chinese People’s Liberation Army (PLA) enjoys massive public support because of the help they provide in times of disaster or other need.

They claim to bring peace and democracy in a War on Terror but, over 20 years, killed 929,000 people and created 38 million refugees. 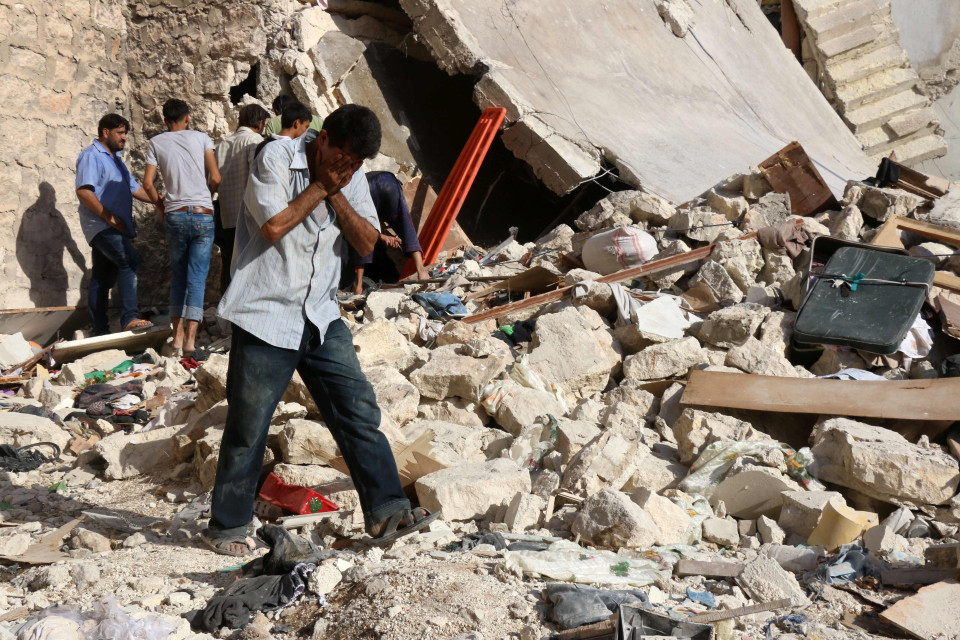 A Syrian man cried after the air raid by the US and France in 2016. (Photo/Xinhua)

Their War on Terror has killed several major leaders such as Gaddafi, Hussein and Bin Laden, and yet there is strong evidence that all three of these dead enemies were once allies of, or created by, the US’ own intelligence community.

In other words, America is not declining; it has declined! Recovery of social and physical infrastructure, without great leadership seems unlikely. The only questions that remain are: How much further can it fall, and when will people start noticing?

The article reflects the author's opinions, and not necessarily the views of GDToday.