Cantonese cured meat is one of the indispensable delicacies for Guangdong locals. Specifically, Huangpu Cured Meat originated from Zhongshan's Huangpu Town is one of the representatives of this specialty, featuring bright colors as well as sweet and mellow flavors.

Cantonese cured meat is one of the indispensable delicacies for Guangdong locals. Specifically, Huangpu Cured Meat originated from Zhongshan's Huangpu Town is one of the representatives of this specialty, featuring bright colors as well as sweet and mellow flavors.

"I grew up with Huangpu cured meat, so I have a strong passion for it," Wang said. "That is also the reason why I have a sense of mission to develop this traditional industry."

Wang started from scratch despite a family business

Although born in a family with a cured meat-based company, Wang Xiantao started his own business without the help of his elder generations. He managed to establish the first cured meat retail store of his own by investing all his savings, applying for loans and borrowing funds from his friends.

Wang can still remember the painstaking efforts he made at the very beginning. "I needed to deal with a lot of work all by myself, including unloading goods, packing, delivering and even sweeping the floor," he said. Finally, he proved his ability and devotion to the cured meat industry, and successfully undertook the business of his family.

After becoming the chairman of Guangdong Wing Yip Food Co., Ltd., Wang Xiantao upgraded the company's equipment and sped up the production while ensuring the traditional flavors and quality of the products. Furthermore, he also developed instant cured meats with new flavors to satisfy the appetites of young people in 2016, so as to enhance the popularity of Huangpu Cured Meat.

According to Wang, the company has created 300 employment opportunities for local workers to improve their incomes.

The cultural base to promote Huangpu Cured Meat

"Wing Yip Food serves as the cultural base to promote Huangpu Cured Meat," Wang Xiantao said. Speaking of the inheritance of this traditional craftsmanship among the younger generations, he mentioned that the company has set up master workshops, responsible for teaching, inheriting and conducting R&D on Cantonese cured meat. 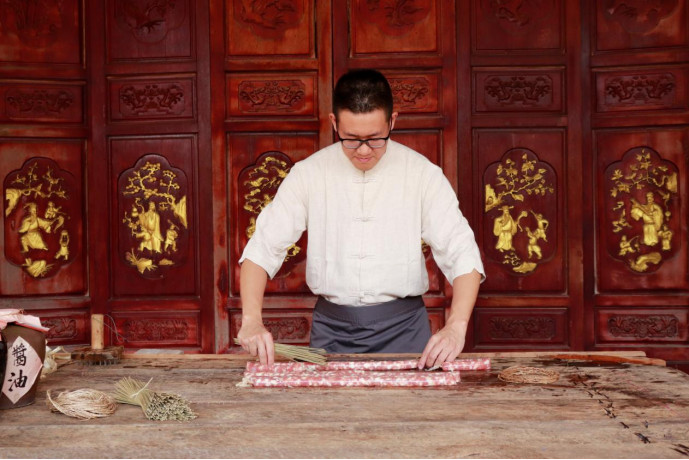 In recent years, Wang has worked with Zhongshan Technical College to found an R&D base for Chinese cured meat to push forward the inheritance and education of the traditional manufacturing techniques of Huangpu Cured Meat. He took the lead to establish a cured meat cultural center, providing DIY experience activities so that local children can learn how to make cured meat.

"Cultural innovation, the essence of inheritance, is in my blood," said Wang, "only culture can be passed on from age to age."

Apart from domestic markets, Wang Xiantao also endeavors to popularize Huangpu Cured Meat worldwide. In 2018, Wing Yip Food was successfully listed in the Republic of Korea, becoming Zhongshan's first cured meat company to be listed overseas. The products made by the company can be seen in many Chinese supermarkets overseas.

In 2020, Wang Xiantao invested 1,000,000 RMB in Hainan Free Trade Port to build a food processing enterprise with an area of 6,000 square meters. In the near future, he plans to further promote Huangpu Cured Meat to go global.