Charm of Lingnan | Cantonese-style palace lantern: the art of light

As the Spring Festival approaches, lanterns are gradually hung up on high streets and back lanes in Guangdong. Among them, Cantonese-style palace lanterns are receiving great acclaim and becoming widely known even among overseas customers.

As the Spring Festival approaches, lanterns are gradually hung up on high streets and back lanes in Guangdong. Among them, Cantonese-style palace lanterns are receiving great acclaim and becoming widely known even among overseas customers. Palace lantern was invented in the Eastern Han Dynasty (25-220) and entered a stage of vigorous development in the Ming and Qing Dynasties (1368-1912). According to legend, after Emperor Yongle of the Ming Dynasty moved his capital to Beijing, he recruited skilled craftsmen from all over the country to manufacture palace lanterns for the imperial court.

Guangzhou, as the starting point of the Maritime Silk Road, has obtained a large amount of imported rosewood. Thanks to that, skilled Cantonese craftsmen in history developed and produced various Cantonese-style rosewood palace lanterns integrating artistic and decorative features, and presented these lanterns as tributes to dignitaries in the capital. 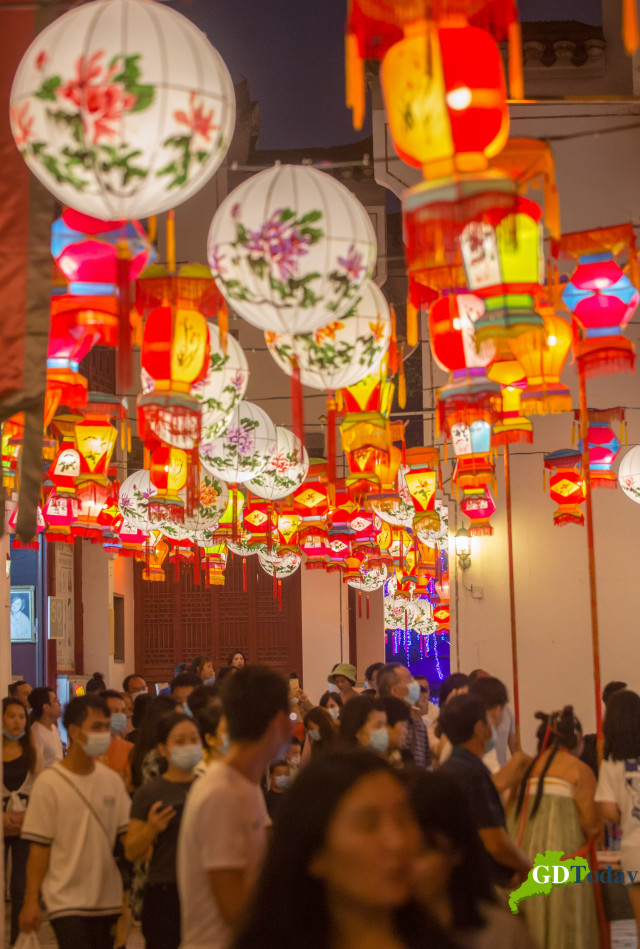 The rosewood frame components are carefully carved and made of rare and highly prized wood, such as narra, sandal wood and padauk wood, which are not easily deformed. The production processes include wood selection, baking, cutting, drawing, carving, scraping, assembling, rough grinding, painting at the bottom, fine grinding, color picking, painting the surface layer, and assembling. Each backbone and interface of the lantern frame are finely made.

Carving is the hardest part of making a frame. Even a less complex pattern will take at least 10 days to carve by hand. If the pattern is complicated, it will take several months or even half a year to be carving. Craftsmen usually use iron wire to saw through the wood, then carve the wood with knifes, and use iron wire to grind the wood gap again. After many times of grinding and trimming, a rosewood frame is completed.

The paintings on palace lantern glass surfaces are usually traditional Chinese flowers, birds, and landscapes. They are colored with a special pigment commonly known as "lamp oil (灯胆油)". The inner wall of the glass surface will be frosted in advance, which is conducive to softening the light source.

Finally, after assembling rosewood components, glass paintings, tassels and a bulb, a beautiful lantern is ready to be hung for use. It is remarkable that a finished palace lantern can also be folded and disassembled for easy storage.

In recent years, with the rise of Chinoiserie, Chinese traditional decorations are becoming more and more popular among the public. Rosewood palace lanterns are also widely used in Chinese interior design. Modern rosewood palace lanterns have been improved and innovated in both design and function. They not only maintain their classic looks and historic elegance, but also have modern styles.