After the Lunar New Year, lion dancing was ubiquitous on the streets of Shunde, Guangdong province. Stepping on a wooden stool, a red lion soared into the air and leaped spectacularly 1.8 meters away. "A triumphant lion," the onlookers exclaimed. Then came the surprise. The red lion fell to the ground and dropped its head, revealing the delicate face of a girl.

After the Lunar New Year, lion dancing was ubiquitous on the streets of Shunde, Guangdong province. Stepping on a wooden stool, a red lion soared into the air and leaped spectacularly 1.8 meters away. "A triumphant lion," the onlookers exclaimed. Then came the surprise. The red lion fell to the ground and dropped its head, revealing the delicate face of a girl.

The lions of the Southern School are powerful and tough, and have traditionally been regarded as "passing on to only males and not females". In the hit movie I Am What I Am, A Juan, the only female lion dancer, had a stint in just one scene. In real life, Huang Baoyi, the girl under the head of the red lion, is "holding a breath" in her heart. In this traditionally male-dominated sport, she wants to prove that girls can pull it off.

Shunde is rich in lion dancing culture. In addition to being a member of the local women's lion dancing team, Huang is also the only full-time female player in the current team. She is 26, and her "lion age" is 13. Last year, a photo of her lion dancing pose became an internet sensation, with more than 12 million views. But the popularity did not last long, instead, prompting more girls to leave the team. Yet her dream of "waking a lion" is still burning. She dreams that one day, she will be able to dance with more girls and stand on the world stage where more people can feel the spirit of Chinese lion girls.

Lion dancing is not only a sport, a performance, but also a traditional culture that is deeply rooted in the national marrow. Immersed in the sound of lion dancing drums, Huang became attached to the art. However, the lion head is heavy. Traditionally it was viewed that girls would not be strong enough to handle it. Even if they join the team, they usually do the other stuff, like beating drums and cymbals.

Her dexterity attracted the attention of Deng Dao, the coach of the women's team. Huang joined the team and was greeted by a regime of high-intensity physical training. She had to practice running, dumbbells, frog leaps, lunges and squats every day. She trained for two hours early in the morning, then went to school, and trained for another two hours after school. At the end of the day her hands and feet didn't seem to belong to her, Huang recollects.

Some people said their physical ability is not as good as that of boys, and they don't look good when they dance. When Huang heard this, she couldn't hold back her anger. Girls can! She wanted to shout it out! The minimum height of the high pile is half a meter and the maximum 2.5 meters. The height alone discourages many girls. The longest distance between the piles is 1.8 meters, and the lion head and the lion tail are required to jump in the air together. Once she didn't step on it firmly, and fell from the pile.

Looking at the bruised wound, she felt that it was more like a refined mark, a badge of honor. Deng trained Huang to the same standard as men. However, in 2010, Deng retired, and the team disbanded. Huang was assigned to her school's martial arts team, and everyone went their separate ways. After graduation, she tried many jobs, selling houses, delivering couriers and doing e-commerce, but just like the heroine A Juan in the movie, Boom, dong dong, the drumbeat of the awakening lion kept sounding in her heart.

She contacted other lion teams in her spare time to train and perform. In 2019, Huang met Li Peikun, the leader of Shunde Lunjiao Sanzhou Dragon and Lion Troupe. Li offered her a post, and Huang agreed immediately and quit her job to become a full-time member of the troupe. Huang put on lion trousers and a lion's head, and the sense of belonging came back. She became the returning lion.

In order to maintain the best performance, her weight has been kept at about 37 kilograms, and as she is wearing a lion head of 2 or 3 kg, movement can be difficult.

Huang has found a niche for female lion dancers. "Boys are good at masculinity. They are all about hard bridges and squats. We girls play with details," she says.

The lion dancing has a cute and naughty side. The laziness of the lion coming out of the cave, the suspicious appearance in exploring the cave, the mischievousness of playing in the water, the greediness of eating ... Huang is very confident in these static movements. Girls are more expressive, she says.

Huang plays with the kittens on the street and observes the cats' every move as she gets a rare chance to watch lions. Her family did not understand her, and felt that it was dangerous and her income was low. "With more money or less money, I have enough to make a living," She says. " I've made my passion as a profession. Isn't this the happiest thing?"

On the wall of the training room, there is "No Taboo" sticker, a portrayal of the women's lion team: they are in awe of the tradition of lion dancing, and there is no distinction between men and women in dancing skills. For Huang, passing on the tradition is also her mission. Every week, Huang and the team members bring the lion dancing class to Sanzhou Primary School. On weekends, parents take their children to the base to study. Half of these students are girls.

But life is often like a movie itself. For lion dancers, the age of 30 is a turning point in physical fitness. What should a lion girl in the real world do if she can't achieve her dream of climbing to the top of the world?

"I still have a group of 'little lions'," Huang says calmly. "Then I'll be a coach and help other girls make it." 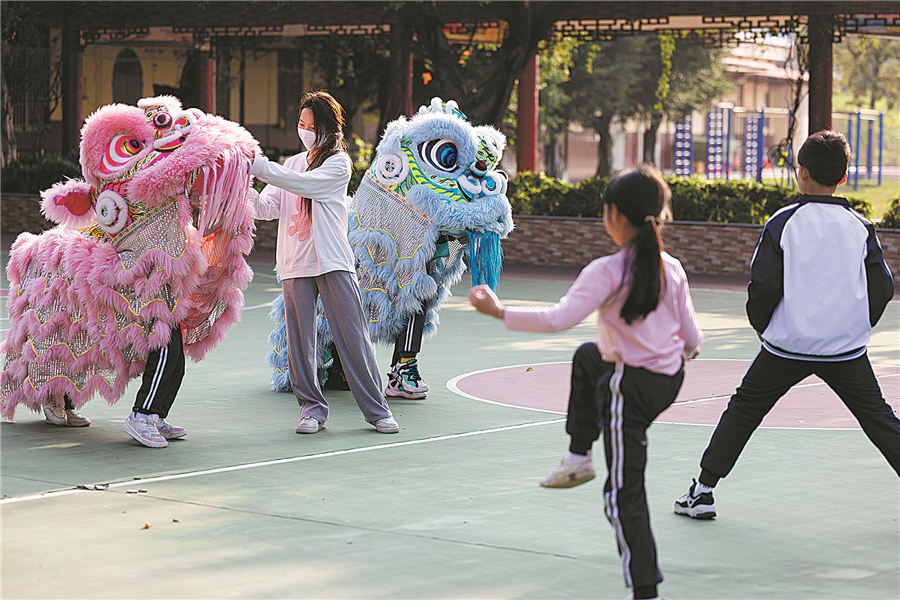