Cantonese cuisine, a world-renowned culinary genre, is one of the "Eight Cuisines of China." It lays emphasis on the quality and taste of ingredients, and eggplant plays an important role in it. Let's take a look at eggplant cooking and find out the best way to enjoy eggplant in Guangdong style.

Cantonese cuisine, a world-renowned culinary genre, is one of the "Eight Cuisines of China." It lays emphasis on the quality and taste of ingredients, and eggplant plays an important role in it. Let's take a look at eggplant cooking and find out the best way to enjoy eggplant in Guangdong style.

Braised eggplant with salted fish in claypot is a classic Cantonese dish, which is improved on the basis of salted fish, tofu and diced chicken. Chop the salted fish into pieces, fry it in oil, add eggplants and seasoner, stew it until the dish has a good taste. Then the dish is completed. If you want to have a better flavor, you can also add minced meat and sprinkle chopped green onion before eating it.

The stuffed eggplant, a famous Hakka dish, is a perfect match between eggplant and meat, which is very delicious. Cut the eggplant into a hollow cylinder, fill the hole with meat, and then fry it. When the eggplant becomes soft and the meat is fully cooked, brew the eggplant and thicken the broth with mixture of cornstarch and water. In this way, the stuffed eggplant is ready. It is full of the smell of meat and oil, and it tastes very good. Eggplant in this dish becomes the protagonist, making meat play a supporting role. 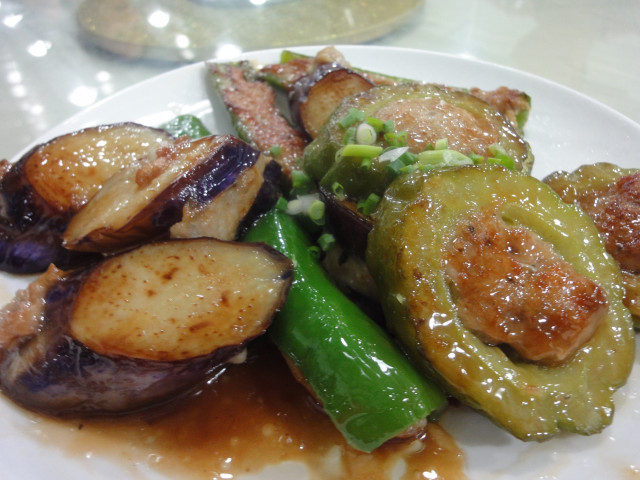 Roast eggplant with minced garlic is common on teenagers' barbecue menu. You need to cut an eggplant from the middle and put it on tin foil. Cover it with minced garlic, put it on charcoal fire and roast it slowly. In some restaurants, the roast eggplant is made into another upgraded version of delicacy by chefs. First, stuff minced meat into eggplant, fry it, then pour  prepared sweet Thai sauce over it, and finally wrap it with tin foil on a hot iron plate. Roast eggplant usually has a sweet, sour and soft taste, which is a favorite dish for the elderly and children.

Some gastronomes consider the best way to cook eggplant is to steam it, so that the eggplant won't lose its original flavor. Steam fresh eggplants, tear them into thin strips, add minced garlic, sprinkle with boiling oil, chopped green onion, fried white sesame, a little sesame oil and soy sauce in proper order, then mix them well, and you can have a good appetizer.

The practice of iced eggplant has appeared in new Cantonese cuisine. There are two different ways to make iced eggplant. The first is to simply dip the frozen eggplant in the mustard and soy sauce. The other method is called "picking up (捞起)". It puts the steamed eggplant on the plate with shredded onion, shredded carrot, coriander, sour pepper, sour Chinese bulbous onion, crushed peanut, and sesame together. Diners therefore need to pick up the eggplant and add seasonings by themselves. In Cantonese, the pronunciation of "pick up" sounds like "LouHei", which means "being successful everywhere". This dish is flavorful and also has a good meaning.

Eggplant is not only a common ingredient in Chinese cuisine but it has become a component of a variety of delicacies in the hands of skilled chefs. Although it is ordinary, it is still the taste of home in many people's hearts.