“As one of the strategic development priorities of the GBA, it is poised to build itself as the world-class city cluster, innovation center, air transport cluster and provide strong support to the BRI. These could pose great potential for international travel and cargo transport in the post-pandemic era,”said Adam Li, Vice President of Emirates China.

Editor's note: According to 2022 Government Work Report delivered on March 5, China will continue to promote high-quality Belt and Road cooperation. How could the Guangdong-Hong Kong-Macao Greater Bay Area promote aviation industry and fuel the Belt and Road construction? GDToday invited the Vice President of Emirates China to share his insight about the opportunities that GBA brings for international airline companies.

“As one of China's important centers for economy, technology and industry, the Guangdong-Hong Kong-Macao Greater Bay Area's goal to build an efficient aviation industry will fuel the economy,” said Adam Li, Vice President of Emirates China.

Being a world-renowned airline based in Dubai of the United Arab Emirates (UAE), Emirates has been a player of the GBA's international airline industry for quite a long time. Currently it operates both passenger and cargo services to Hong Kong and Guangzhou, two of the core cities in the GBA.

Looking ahead to GBA's future, Adam Li hoped that the region could welcome more opportunities, maintain its innovative spirit and embrace a bright future.

More than 8 years since the Belt and Road Initiative (BRI) was first put forward in 2013, 147 countries and 32 international organizations have signed cooperation agreements with China. The UAE joined the BRI construction in 2018, building up stronger ties between the two countries. China was the UAE's top trading partner in 2020 with bilateral trade reaching 47 billion USD.

Emirates is a major participant of deepening partnership between the UAE and China, especially the GBA. It handled more than 21,000 tons of import and export cargo covering general goods, clothing, electronic products, seafood and medicines through Guangzhou in its 2020-21 financial year, helping to maintain trade exchanges between the GBA and the global market during the COVID-19 pandemic.

According to Adam Li, Emirates is well positioned to support the GBA in advancing its trade and investment links with BRI countries through the airline' shared network along with its codeshare partner connecting 124 destinations in 70 BRI countries via Dubai.

“As the GBA is seeking to connect with other parts of the world for its development goals, our hub in Dubai could play a vital role in greatly enhancing its trade links with the rest of the world, especially to the Middle East and African countries, as well as the Belt and Road countries,” Adam Li added. 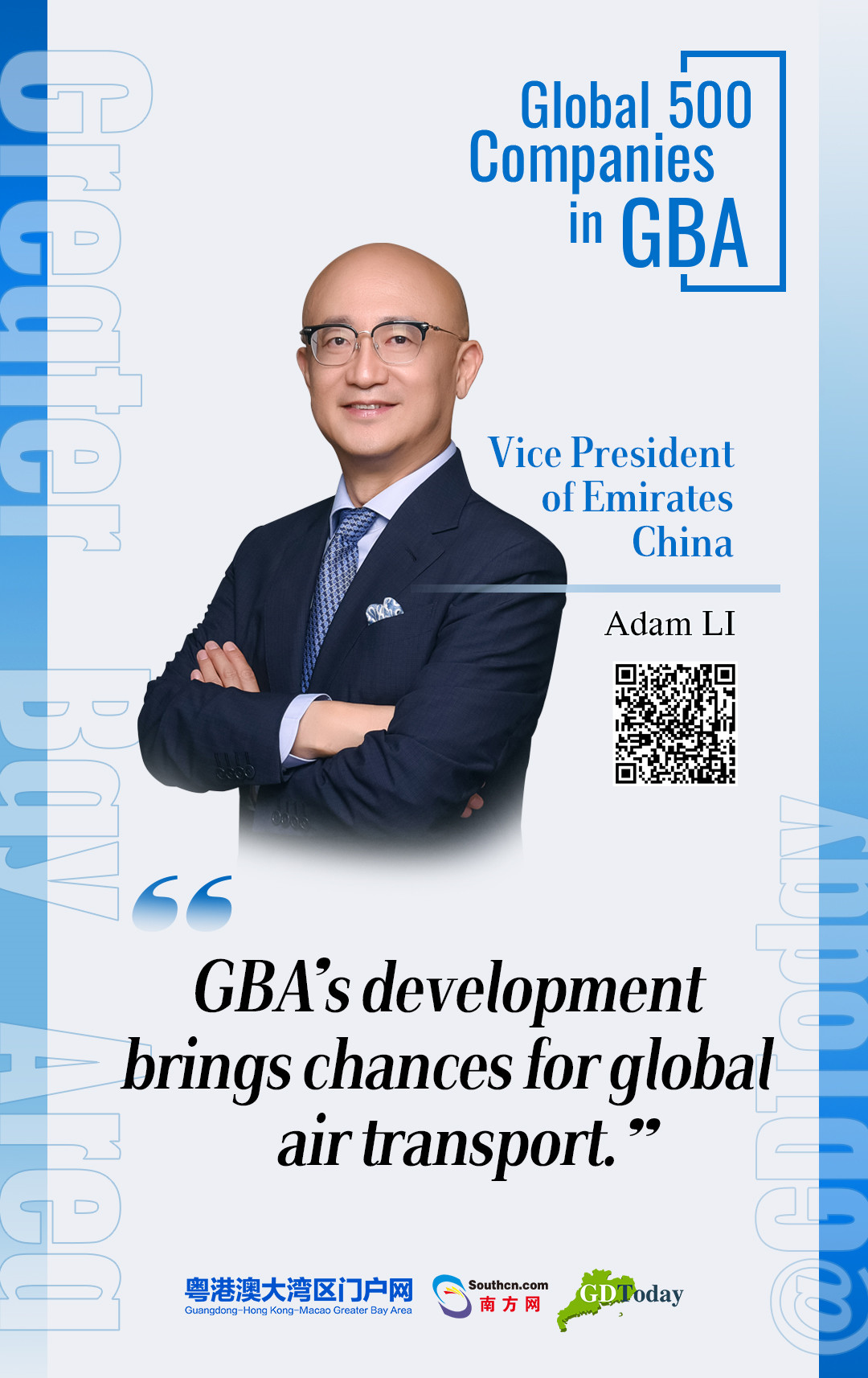 As the COVID-19 vaccination rollout is accelerating, the world economy and the aviation industry are gradually recovering. Emirates is also taking steps to resume its operation and the GBA is one of their focuses.

“As one of the strategic development priorities of the GBA, it is poised to build itself as the world-class city cluster, innovation center, air transport cluster and provide strong support to the BRI. These could pose great potential for international travel and cargo transport in the post-pandemic era,” Adam Li believed.

According to the 2021 indicators about the GBA's transportation released by the Guangdong-Hong Kong-Macao Greater Bay Area Information Center, the airports within the GBA had a cargo throughput up to 8.7 million tons in 2021, and an 89.13 million passenger throughput. “In terms of future plans, our immediate priority is to re-establish our pre-pandemic destinations and frequencies, especially into the Guangdong and Hong Kong region.”

As for how to strengthen international competitiveness of the GBA's air logistics services, Adam Li emphasized the importance of building a more open business environment, applying more advanced technologies and facilities, and putting more supporting measures in place.