One of the highlights of the 17th G20 summit on the Indonesian island of Bali has been Chinese president Xi Jinping’s bilateral meetings with other participating leaders. He met with French President Emmanuel Macron in the morning of November 15, before both leaders showed up at the opening of the summit.

“The meeting is a positive signal and an important step towards building strategic trust between China and Europe and not just seizing strategic opportunities,” said Julien Buffet, French columnist and expert on international relations in a recent interview with GDToday. He noted what China has proposed at the summit offers an alternative vision of multilateralism. 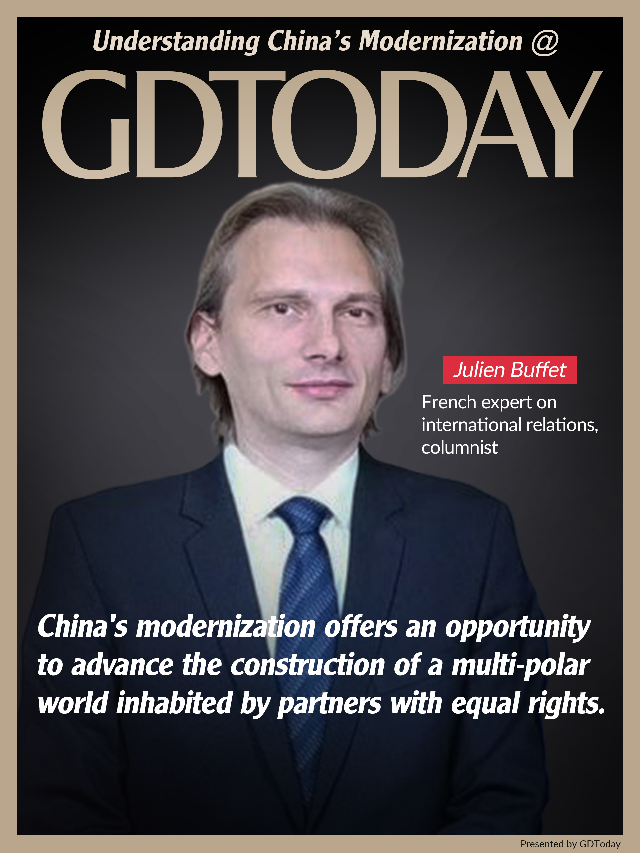 At the first session of the G20 summit on November 15, Chinese President Xi delivered a speech, saying that faced with challenges, all countries should embrace the vision of a community with a shared future for mankind, and advocate peace, development, and win-win cooperation.

In the speech, Buffet paid close attention to Xi's reminder of the Global Development Initiative (GDI) and the Global Security Initiative (GSI). “These two initiatives propose an alternative vision of multilateralism to the more conflictual US vision of the international system.” He considers the latter mixes national security with economic development through blocking key WTO functions.

The GDI, instead, aims to facilitate common development and progress of all countries and promote the implementation of the 2030 Agenda for Sustainable Development. According to Xi’s speech, more than 60 countries have joined the Group of Friends of the GDI. Having established the Global Development and South-South Cooperation Fund, China will also increase its funding for the China-UN Peace and Development Fund.

The GSI, as Buffet elaborated, is based on the principle of indivisible security, which opposes beggar-thy-neighbor practices, and is dedicated to advocating the resolution of conflicts through negotiation and settlement of disputes through consultation, as well as supporting all efforts conducive to the peaceful settlement of crises.

“The GSI and GDI leaves the door open for a wide range of joint initiatives between China, one of the main leaders of the countries of the South, and Western countries. They help to avoid the trap of an artificial divide between the West and the Global South, which is vital to the reform of multilateralism,” Buffet said.

In the meeting with Macron, Xi underscored China's commitment to promoting high-standard opening up and advancing Chinese modernization, saying these efforts will offer France and other countries new opportunities.

“It shows that it is possible for societies to modernize peacefully without giving up their particularities, as long as states are aware of the impossibility of imposing their models through military force or economic violence,” Buffet furthered, “From this point of view, Chinese modernization offers the opportunity to advance the reform of multilateralism and the construction of a multi-polar world inhabited by partners with equal rights.”

Europe will not decouple from China

In terms of economic recovery in the post-pandemic era, Buffet expects the opening up of China’s financial markets and the country’s green transition through digital transformation will both provide an important impetus for global economic development.

He urged the European Parliament to ratify the EU-China Comprehensive Agreement on Investment (CAI), which has been suspended due to political disputes, noting the CAI would further contribute to the economic recovery of the both sides and the world in general, “especially as it is supported by the major European business federations and companies”.

“The CAI is the missing piece in the global economic cooperation mechanism formed by the Phase One Agreement between the US and China and the Regional Comprehensive Economic Partnership (RCEP) signed between 15 Asian countries including China,” Buffet said.

He furthered, “The CAI is the only one of the three economic agreements to allow European companies to participate in Chinese governmental standardization bodies, and would therefore allow for progress towards mutual recognition of international standards governing new sectors of the global economy, such as artificial intelligence and new technologies in general, which is essential for greater reciprocity in trade relations among China, Europe and the rest of the world.”

Buffet believes the G20 summit in Bali is a springboard for improving China and Europe relations, “because it allowed direct exchanges between Western and Chinese leaders to move forward together on common issues, and the bilateral meeting between Chinese and French leaders has sent a positive signal.”

Although there are calls for economic decoupling from China in European countries, in Buffet’s view, this will not happen in practice. “From a European perspective, the main concern is that a decoupling between the US and China will further weaken European companies. The EU is therefore setting up legal instruments of self-defence that should guarantee open markets with the US and China.”

Buffet expects that China and Europe are building up strategic trust. “It should be confirmed at the APEC 2022 summit in Thailand’s Bangkok, where the leaders will meet again, and by the visit of the French president to Beijing in early 2023.”