At the invitation of Chinese President Xi Jinping, Philippine President Ferdinand Romualdez Marcos Jr. is paying a state visit to China from January 3 to 5. Austin Ong, co-founder of the Philippines-China Friendship Society described the visit as a “reunion trip” of Marcos with China.

As Marcos recalled in a speech before departing for Beijing, he accompanied his mother, the then First Lady Imelda Marcos, during her diplomatic and trade mission to Beijing in 1974, which led to the establishment of formal diplomatic relations between China and the Philippines in 1975.

Now Marcos has started his first diplomatic trip to China and his first official visit to a non-ASEAN country since he assumed the presidency in July 2022. “Marcos is looking forward to elevating the relations,” Ong said in an interview with GDToday on January 3. “Now that the Philippines is facing economic challenges in terms of food and energy security, China is a strong and reliable partner, as President Marcos himself said.” 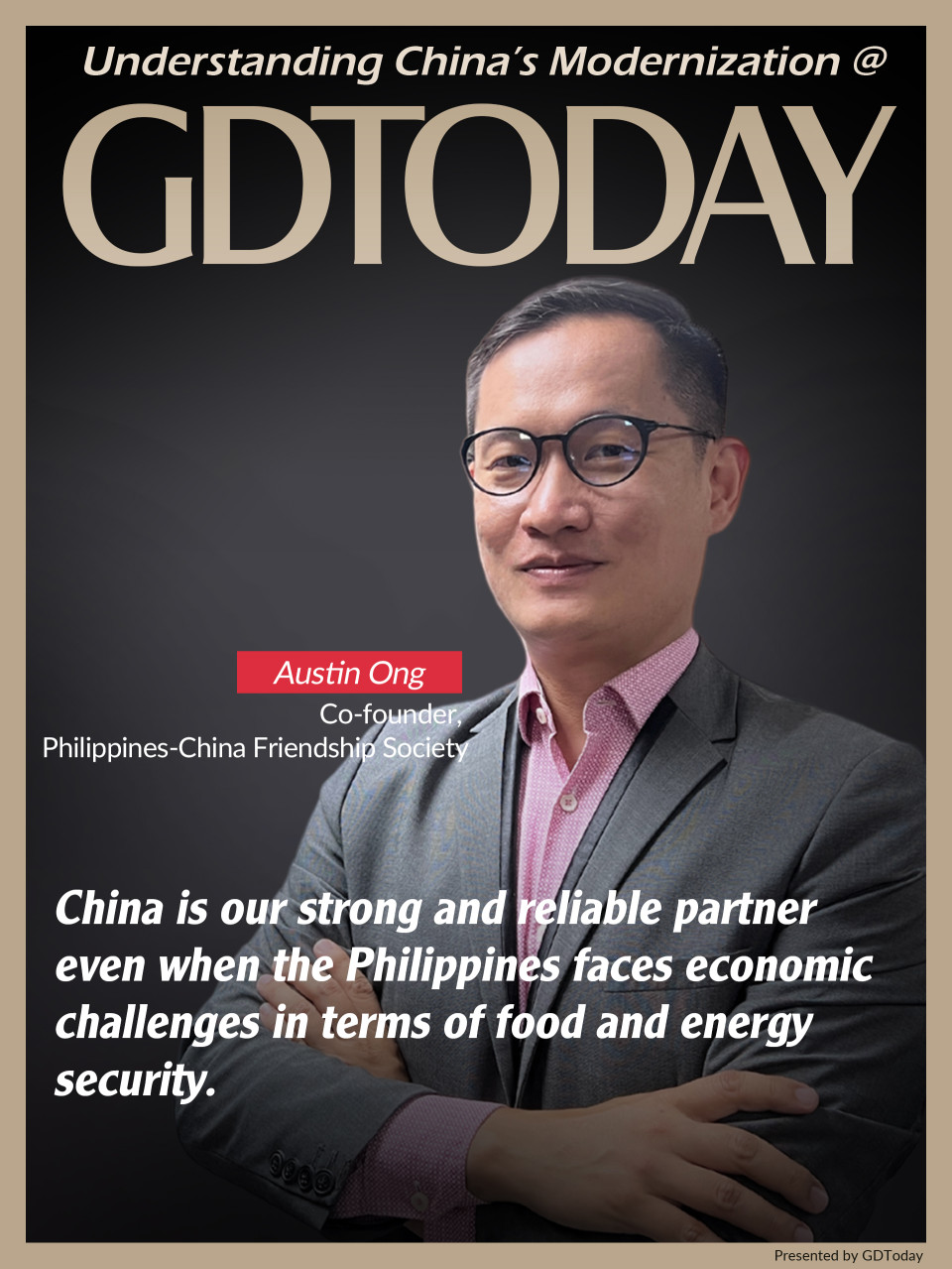 China to be an important player in Marcos’s BBM program

Ong told GDToday that China has been an important partner of former Philippine President Rodrigo Duterte’s “Build Build Build” (BBB) infrastructure program and will continue to be an important player in Marcos’s version which is called “Build Better More” (BBM).

He mentioned three signature projects being implemented in collaboration with China, that is, the Samal Island-Davao City Connector Bridge, the Kaliwa Dam and the Chico River Pump Irrigation Project.

Ong noted that the first two projects were proposed over 30 years ago. “With China's help, I believe the projects will progress as scheduled.

Ong took the Kaliwa Dam for example, which located about 35 km northeast of Metro Manila, is expected to be completed by June 2025 and would help meet the increasing water demand of the National Capital Region of the Philippines by supplying about 600 million liters of water per day.

As for some negative reports on the project, Ong said some Western media try to exaggerate the news that it is a big group of people who are against the project, but the fact is that the government has already promised to provide local communities with relocation solution. “I believe the Chinese company has coordinated with the local government and has been compliant with all the environmental and local laws.”

“More than 11 million Filipinos live in Metro Manila, so we really need the Dam,” he stressed. 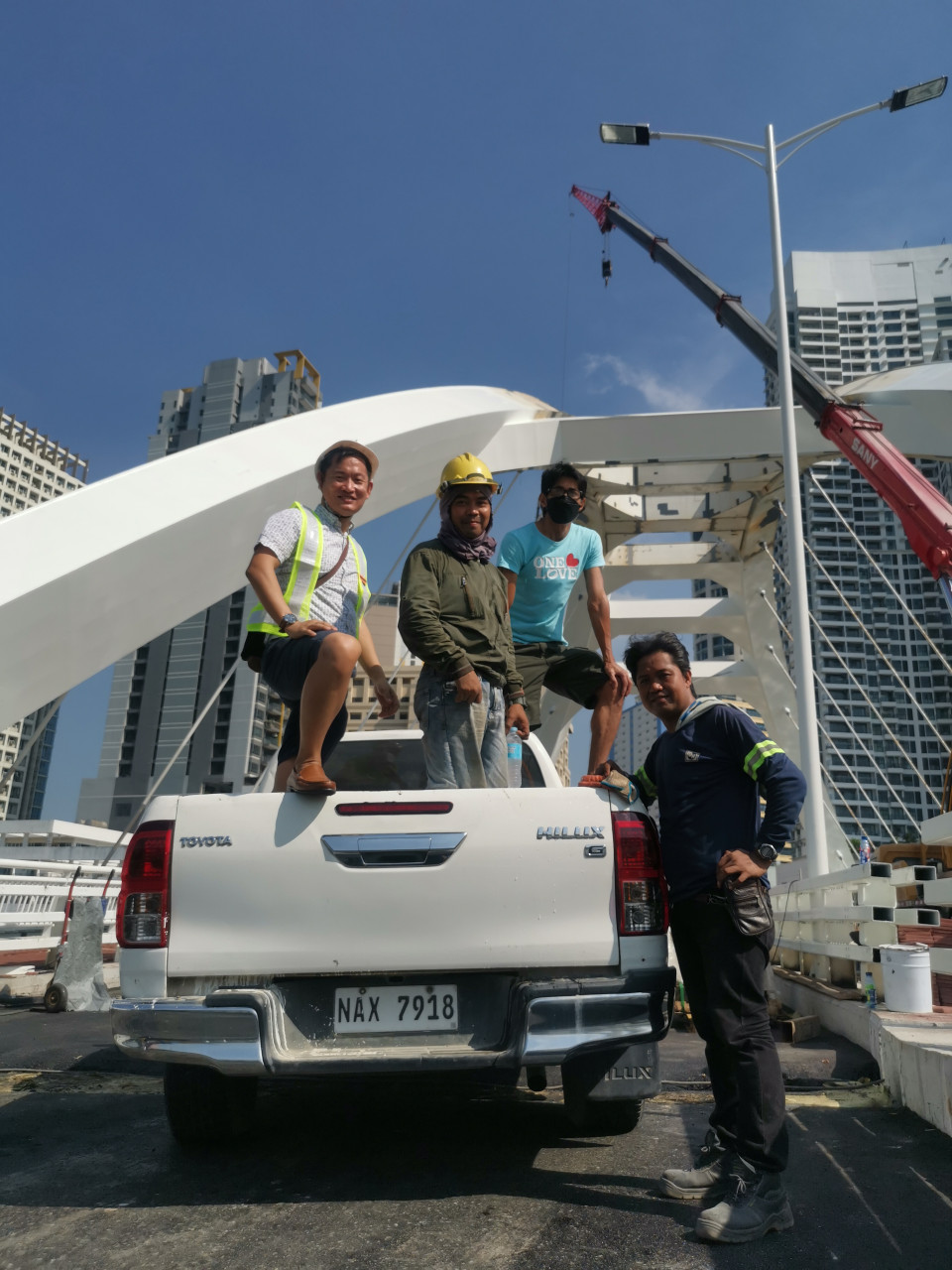 Austin Ong with construction workers on the China-funded Binondo-Intramuros Bridge in Manila, the Philippines. (Photo provided to GDToday)

“Philippines should not be used as proxy battleground of geopolitical rivalry”

The disputes over the South China Sea will also be discussed during Marcos’s trip. “The issues between our two countries are problems that do not belong between two friends such as Philippines and China. We will seek to resolve those issues to mutual benefit of our two countries,” Marcos said in a speech on January 3 before leaving for Beijing.

“There is a flood of fake news over the issues sowing discord between the Philippines and China, especially when there is an important event such as Marcos’s visit to China,” Ong said. “Many of the reports come from US-funded or US-linked think tanks, NGOs or satellite companies for geopolitical intentions. They either only report part of a story or distort what actually happened. Sometimes the information in the reports is months old.”

“Therefore, when there is an incident, Marcos said he will wait for the reports from both the Philippine side and the China side. And he will make a decision after finding what really happened,” Ong said.

In a press briefing on December 29, Nathaniel Imperial, Assistant Secretary for Asian and Pacific Affairs of Philippine Department of Foreign Affairs, said that direct communication between the foreign ministries of China and the Philippines at various levels will be established to avoid miscalculations in the issues pertaining to the South China Sea.

“I believe they have already planned to establish the channel where the government agencies or the coast guards can have a direct communication under the presidency of Duterte in 2018. It will contribute to regional peace, but some of the local forces in the Philippines were able to delay the proposals,” Ong said.

“When it comes to the South China Sea, geopolitics always play an important role,” Ong elaborated. “The Philippines should not be used as a proxy battleground of geopolitical rivalry. We hope that Marcos’s trip to China will help to work towards not only peace between the Philippines and China, but also the regional peace and development.”