“Germany needs cooperation with China to reduce the negative effects of the sanctions against Russia, and most importantly, to assure the ‘Wohlstand’ (wealth) of German people reached during the last decades,” said Gu Xuewu.

German Chancellor Olaf Scholz met Chinese President Xi Jinping during his inaugural visit to China on November 4, which is the first state visit to the country by a G7 leader since the start of the COVID-19 pandemic.

“I believe the decision of Scholz to visit China is a right one,” said Gu Xuewu, director of Center for Global Studies at the University of Bonn in Germany and non-resident senior research fellow of Center for China and Globalization in a recent interview with GDToday.

“Germany needs cooperation with China to reduce the negative effects of the sanctions against Russia, and most importantly, to assure the ‘Wohlstand’ (wealth) of German people reached during the last decades,” he said. 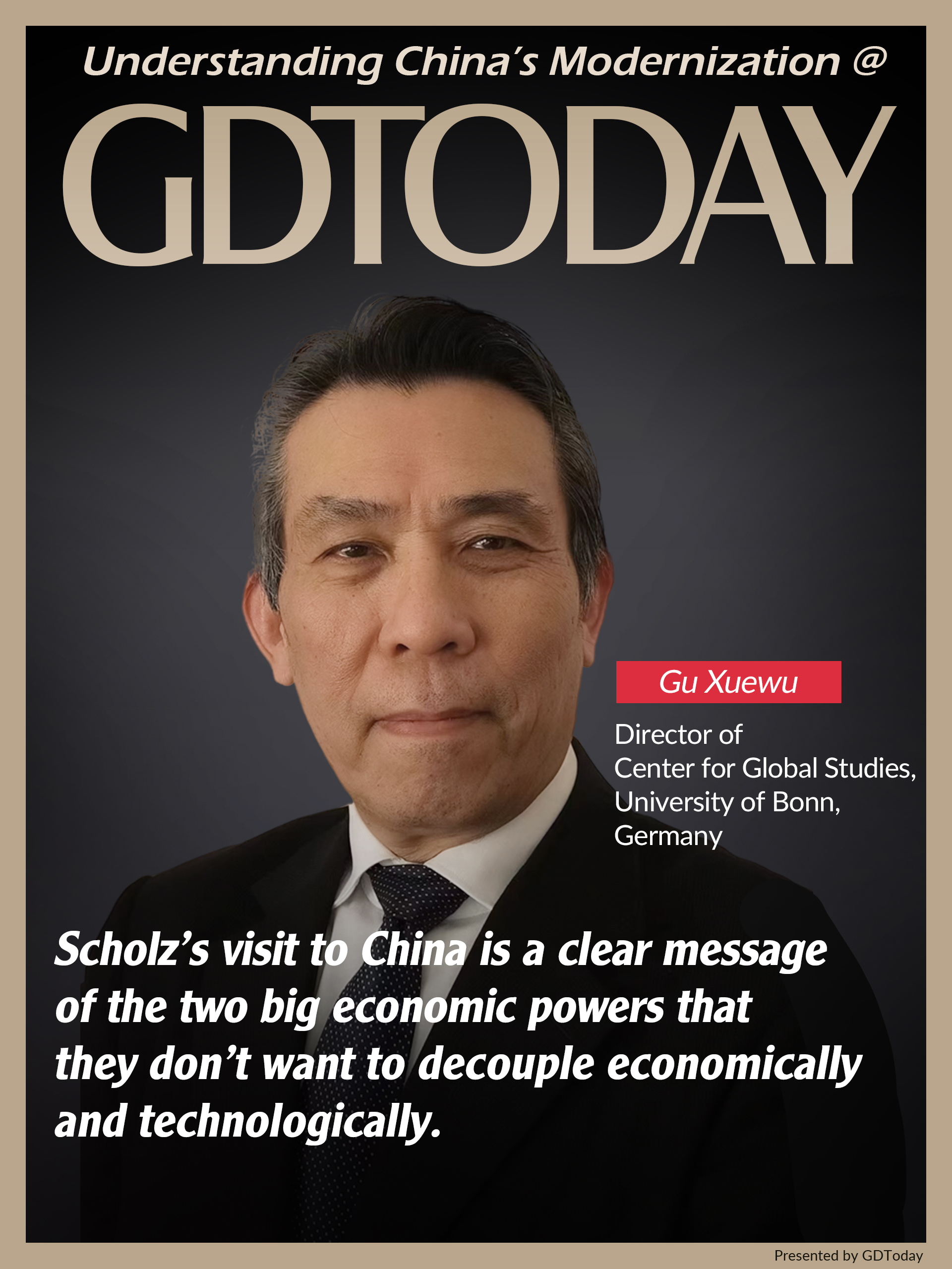 “China-Germany cooperation has proven to be win-win”

In their meeting, Xi highlighted revitalizing cooperation in new areas such as new energy, artificial intelligence and digitalization to make the "pie" of common interests bigger, while Scholz stressed Germany’s firm support to trade liberalization and economic globalization, and that his country is ready to deepen economic and trade cooperation with China.

Scholz’s visit coincides with the 50th anniversary of the establishment of diplomatic ties between China and Germany. “Even in changed circumstances, China remains an important business and trading partner for Germany and Europe,” Scholz wrote in his op-ed for the Frankfurter Allgemeine Zeitung and Politico. “China, Germany and Europe benefit equally.”

China has become Germany’s largest trade partner for six consecutive years. Even during the COVID-19 pandemic, the bilateral trade has maintained momentum. Goods worth $235.1 billion were traded between the two sides in 2021, according to Chinese ambassador to Germany Wu Ken.

To further economic cooperation with China, Scholz brought 12 German industry titans with him during the visit, including the CEOs of Europe’s biggest carmaker Volkswagen, engineering behemoth Siemens, and drug company Merck, according to the German business newspaper Handelsblatt.

“The result of the cooperation has proven a win-win situation,” Gu furthered, “Germany has been a strong supporter of the modernization process of China for more than 40 years.” He took the car industry for example and believes German enterprises have been a facilitator to China’s modernization of the industry through technological and ideational collaboration.

Gu expects China’s modernization would keep the spirit of “open to the world” and embrace globalization that connects China and Germany deeply and sustainably.

“Scholz’s visit to China is a clear message of the two big economic powers that they don’t want to decouple economically and technologically with each other, and they are prepared to defend globalization against other powers who are trying to decouple,” Gu elaborated.

Before Scholz’s visit to China, severe criticism pervaded Western media questioning whether Germany is growing its dependence on China. The deal of Chinese ship firm Cosco buying a stake in one of the four terminals at the port of Hamburg has been a target of the critics.

In Gu’s opinion, the Hamburg COSCO deal was “too much hyped up” by media and by the forces that are extremely skeptical about the role of Chinese state-owned companies in Europe. “I would not go so far to exaggerate the meanings of the deal, but the decisive support of Scholz to it can help to inject a new fresh air into the political climate on the Continent.”

“In the future, the idea of practical cooperation will certainly dominate Scholz’s dealing with China even when his ruling coalition partners remain reluctant and skeptical,” Gu added.

Photo taken on Feburary 23, 2018 shows a view of the port area of Hamburg, Germany. (Photo/Xinhua)

Gu appreciated the efforts Scholz has made to promote bilateral relations right after the 20th National Congress of the Communist Party of China. He hopes the visit will be a springboard for a deeper China-Germany collaboration in tackling climate change and the Russia-Ukraine conflict.

“I’m expecting that Scholz’s visit to China could create some pressure to other Western countries to intensify their talks to the country, against the background that even Biden is passionately to try to meet Chinese leader in the framework of G20 in Indonesia,” Gu said.