In a sales contract, a clause containing the signatures or company seals of both parties could be normally seen at the end of the file.

In a sales contract, a clause containing the signatures or company seals of both parties could be normally seen at the end of the file. Many businessmen may doubt whether a company seal is absolutely necessary in the situation where the representative of the trading party has made a signature. By reading the following case, you may learn more about the role of company seal. 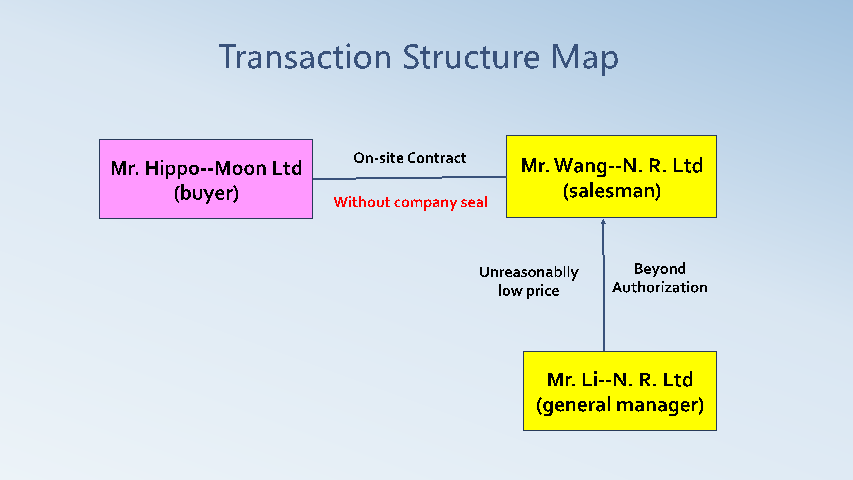 Mr. Hippo, the representative of a foreign Company Moon Ltd, visited a booth branded as N. R. Ltd in the Canton Fair. After the negotiation with the salesman Mr. Wang of N. R. Ltd, Mr. Hippo and Mr. Wang signed a sales confirmation letter on-site.

After Moon Ltd made a down payment, Mr. Hippo received an email from Mr. Li, the general manager of N. R. Ltd, and he was informed that:

[1] Mr. Wang was a new comer who mistakenly quoted an unreasonably low price to Mr. Hippo beyond his authorization;

[2] The contract was signed by Mr. Wang only but did not have the company seal of N. R. Ltd on it. Therefore, N. R. Ltd was not going to perform the contract unless Moon Ltd agreed to increase the price.

In view of the above-mentioned facts, the following legal proposals may be made for the both parties:

1. As to N. R. Ltd, for the purpose of refusing to perform the contract, it may claim that:

(1) The contract without company seal showed that N. R. Ltd did not have true intention to do this transaction, hence the contract should not be binding over both parties;

(2) It was a serious misunderstanding by a newcomer of the company, and obviously unfair to continue the transaction; or

(3) Moon Ltd has done this kind of business for over 10 years, the company certainly must have known this price was unreasonably low, which was not in good faith; etc.

2. In order to push N. R. Ltd to perform the contract, Moon Ltd may place emphasis on the following arguments:

(1) Mr. Wang achieved authorization from the company, and Mr. Hippo could fully believe that Mr. Wang had acted within authorization;

(2) Mr. Wang has been working on this field for many years. Even though he was a newcomer of N. R. Ltd, he had a thorough understanding of this kind of products;

(3) The low price was due to the special promotion of N. R. Ltd or the large amount of the order; or

(4) The price reduction was due to minor defects on the goods, etc.

To prevent similar legal risks in the above case, the following measures are strongly recommended to take during Canton Fair:

1.Affix the contract with company seals

In China, company seal is highly important and the official seal shall be approved and registered by public security bureau. Any document affixed with a company seal will be regarded as the true intention of the company unless there are other strong evidences to overturn it. The validity of a document only with the signature of a company representative is not stable, which may be challenged by the company if it is not beneficial to perform it; or be admitted by the company if it is favorable. Therefore, affixing the contract with company seals is indispensable so as to avoid the flaws of the contract’s effectiveness.

2.Keep an original copy of the signed contract

A company may have many kinds of company seals such as official seal, special seal for contractual uses or receiving goods, etc. An official seal can be chopped on all the documents representing the company’s true intention, however the special seals shall be consistent with their use. Hence, when signing a contract or other documents, it is strongly suggested to confirm that the affixed seal matches the documents.

【This case study is provided, in friendship, by Lawyer Min Chow (曹卓敏) & Joyce Yang (杨君子) from Guangdong International Business Law Firm. It is not any legal opinion or legal grounds addressed to any organization or individual. For inquiry, please send emails to min-chow@lawyerchn.cn & ojunzi@126.com.】