Can China-US relation get back on track?

"The unhealthy competition between the United States and China would leave the whole world suffering enormously from it,” said Marc Hübsch, Ambassador of Luxembourg to China, at an interview with GDToday on December 6 during 2021 Imperial Springs International Forum in Guangzhou.

"The unhealthy competition between the United States and China would leave the whole world suffering enormously from it,” said Marc Hübsch, Ambassador of Luxembourg to China, at an interview with GDToday on December 6 during 2021 Imperial Springs International Forum in Guangzhou.

"I was stunned by the American Covid blame game"

Chairman of Whitlam & Co, Son of Former Australian Prime Minister Edward Gough Whitlam, stressed that the essence of the US-China trade and technology war lies in the theory of comparative advantage. It means China and the US enjoy the ability to produce a particular product or service at a lower opportunity cost than each other, which is a natural process and relation in global economics.

"China is leaving an acceptance of reaching the balance right between human growth, utilitarianism and economic growth. And I noticed that Charlie Thomas Munger, an American billionaire investor, optimistically predicted that the US and China will reach an acceptable relationship. This certainly should be their goal," said Nicholas in the hope of seeing a healthy relationship between China and the US.

David Firestein, Inaugural President and CEO of the George H. W. Bush Foundation for U.S.-China Relations, asserted that the United States under President Biden’s leadership has moved back toward an embrace of multilateral approaches. “We’re facing some significant domestic political impediments in the United States. One example that hits very close to home for all of us is the Covid-19. I was stunned and disappointed that when the Covid-19 hit the United States in February or March of last year, the instinct of Washington was to blame rather than to figure out how to solve the problem.”

David promotes more cooperation for US and China in pandemic prevention and control rather than blaming. “This is a good example where I don't think we've seen the kind of collaboration across borders, specifically, US-China collaboration that could have been possible and what we should have seen in the context of this pandemic.”

John Aquilina, the Ambassador of Malta to China, held that though the Trump administration created many problems for the world and China-US relation, China-US Joint Glasgow Declaration at COP 26 shed light on opportunities for cooperation between these two countries. 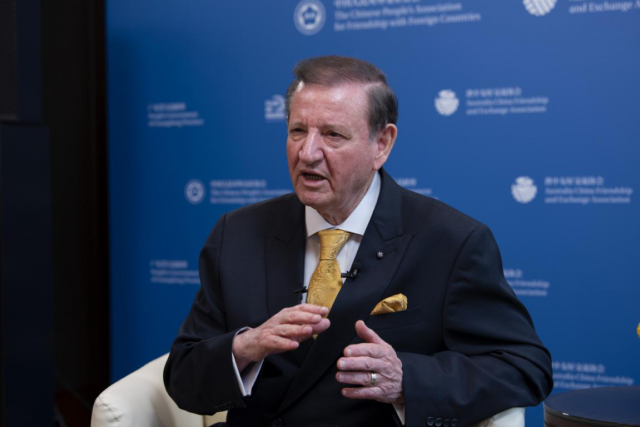 "I think that the China-US Joint Glasgow Declaration signed last month is a tremendous positive signal," he revealed at an interview with GDToday.

Marc Hübsch, Ambassador of Luxembourg to China, said, “The competition between the United States and China, the two world super powers, should not derail, because that would leave small countries and even the whole world enormously suffering from such competition.” Marc hoped that both countries could have some kind of safeguard scheme to make sure that the competition will get back and remain on track.

Susan M. Elliott, President of the National Committee on American Foreign Policy, said, “I’m really glad to see that president Biden and president Xi Jinping recently held a virtual meeting. I hope that Beijing and Washington can continue to find a way to begin or to reinstate formal working level dialogues.”

Susan also reckoned that the China-US Joint Glasgow Declaration on Enhancing Climate Action in the 2020s is an extremely important step that shows that there are areas of mutual interests for the US and China, and illustrates that they can and should work together.