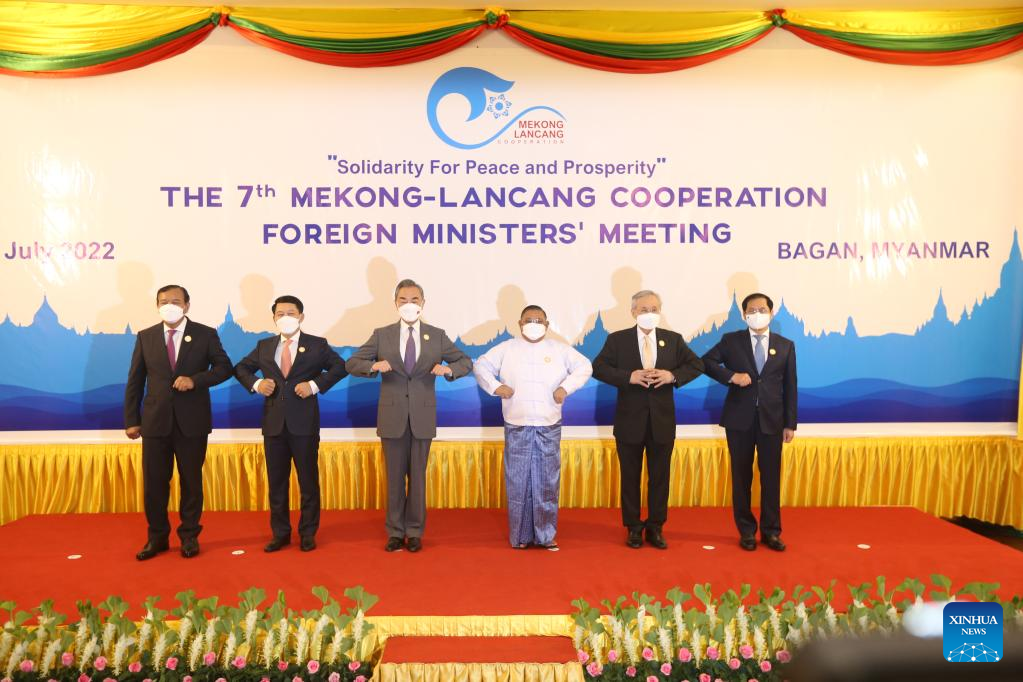 When chairing the seventh LMC foreign ministers' meeting, Wang said that since last year the six LMC countries have earnestly implemented consensuses reached at the third LMC leaders' meeting in 2020.

Second, they have promoted high-quality connectivity and jointly created a "development engine," Wang said. Since the operation of the China-Laos Railway in early December last year, nearly 800,000 tons of freight have been transported cross-border, covering more than 100 kinds of goods.

Chinese-built projects which have been completed include the rehabilitation and expansion of Cambodia's National Road No. 11, the new terminal at Thailand's Suvarnabhumi International Airport and the Cat Linh-Ha Dong metro line in the Vietnamese capital Hanoi.

The Kyaukpyu deep-sea port project in Myanmar has started its environmental assessment, social assessment, and geological survey and feasibility study.

In 2021, trade between China and the Mekong countries reached 398 billion U.S. dollars, up 23 percent year-on-year. In the first five months of this year, trade between the two sides witnessed a 16-percent growth.

Third, the countries have rolled out sub-national cooperation to build a "bridge of friendship," Wang said. The first forum on Lancang-Mekong local government cooperation was successfully held, creating a new platform for local level cooperation.

Fourth, the countries have been jointly pushing cooperation on people's well-being to build a happy home, Wang said. China has expanded imports of agricultural products from the Association of Southeast Asian Nations. In 2021, China's imports from the Mekong countries reached 17.4 billion dollars, up nearly 33 percent year-on-year.

Moreover, the China-aided national stadium project in Cambodia has been inaugurated; the lighting project supported by China in the Lao capital Vientiane has been completed; the China-sponsored maintenance and renovation project of the national stadium in Myanmar has also been handed over; and notable progress has been made in the China-built rural water supply project in Vietnam.

The LMC consists of six countries -- China, Cambodia, Myanmar, Laos, Thailand and Vietnam. The Lancang River originates from the Qinghai-Tibet Plateau in southwestern China. It is called the Mekong River as it flows through the other five countries before emptying into the sea.