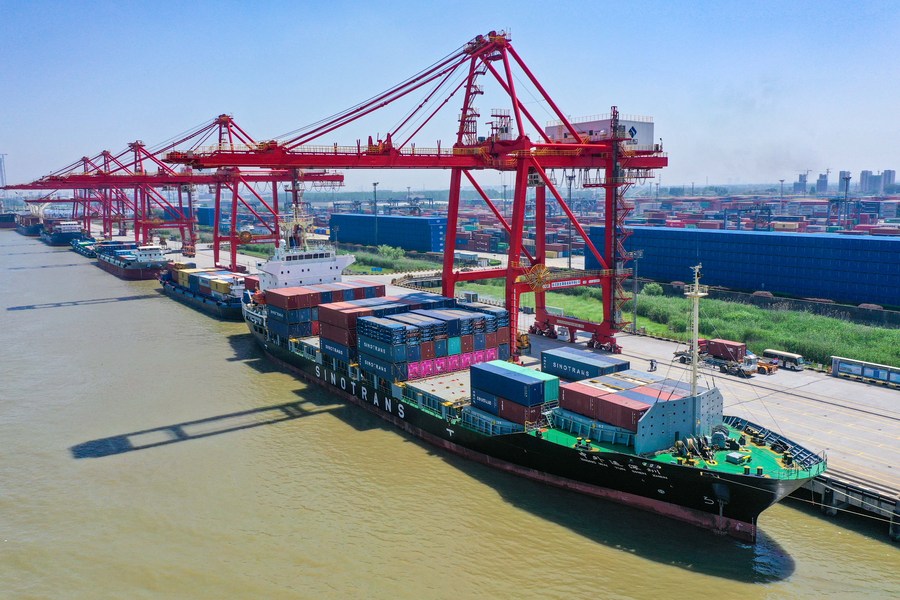 Aerial photo taken on May 6, 2022 shows a view of the Longtan Container Terminal of Nanjing Port in Nanjing, Jiangsu Province. (Xinhua/Li Bo)

The country's economy took a hit from the domestic resurgence of COVID-19 cases in April, but the impacts are "short-lived and external," Fu said.

"The fundamentals of the Chinese economy remain unchanged. The overall trends of economic transformation and upgrading and high-quality development remain unchanged," he said.

"There are many favorable conditions for stabilizing the economy and achieving the expected development goals," the spokesperson said.

With a super-large market, complete industrial and supply chains and huge domestic demand, the world's second-largest economy has the resilience to ward off all kinds of challenges.

Fu said that despite the impacts of the epidemic, grain and energy production maintained growth during the first four months, laying a solid foundation for fighting the epidemic and promoting economic recovery. In April, the output of raw coal, crude oil and natural gas rose 10.7 percent, 4 percent and 4.7 percent, respectively, year on year.

High-tech industries posted stellar performances, with the production of new-energy vehicles and solar cells surging 42.2 percent and 20.8 percent year on year in April.

China's economy is expected to improve in May with the accelerating resumption of work and production in Shanghai and Jilin as well as the implementation of pro-growth measures.

Although some indicators saw contractions in April, it does not mean the economy will slow in the second quarter, Fu said, underlining the roles of investment and consumption in revving up the economy.

"This shows that investment will provide important support to the economic growth," he said.

"With the epidemic coming under control and production and people's lives returning to normal, the pent-up consumption will be gradually released," Fu said.

Despite complex and severe international situation, Fu listed favorable conditions that facilitate China's continuous export growth this year, which include the country's complete industrial system, strong supply capacity of manufacturing, further opening up, mutually-beneficial cooperation with trade partners and development of free trade zones, among others.

Looking ahead, China will strengthen macro policy adjustment and mitigate the epidemic's impacts to ensure the economy runs within an appropriate range, Fu said.