The city's Election Committee members on Sunday morning said the chief executive race's polling was well-organized, as the approximately 1,500 members cast their votes for the city's six-term leader. 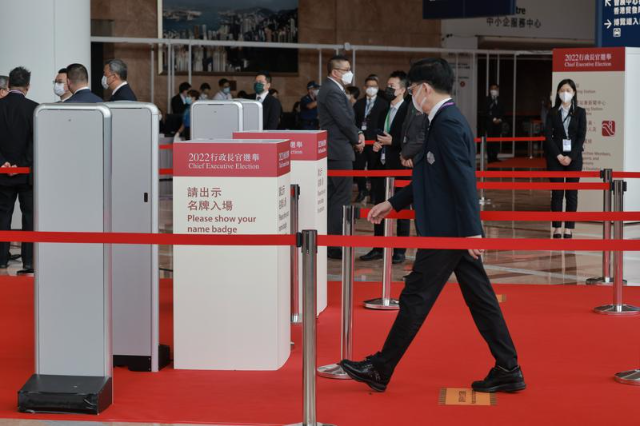 Metal detectors are in place at the entrance to the main polling station of the 2022 Chief Executive Election at the Hong Kong Convention and Exhibition Centre in Wan Chai, May 8, 2022. [ANDY CHONG / CHINA DAILY]

The city's Election Committee members on Sunday morning said the chief executive race's polling was well-organized, as the approximately 1,500 members cast their votes for the city's six-term leader.

"I have worked with John for five years in the government. … I have a good impression of John," Chan told China Daily, referring to chief executive candidate John Lee Ka-chiu. "I think he is a very upright person and personable person, and I believe he is a person who believes in team-building. … I have high hopes for him."

Melissa Pang Kaye, president of the Law Society of Hong Kong, said she needed only a few minutes to cast her vote, and the whole process was quite efficient.

She said that Hong Kong has faced many challenges in the past few years, and Hong Kong people expect to start a new chapter under the leadership of the new chief executive.

She said she has known Lee for many years, and in her view, Lee is quite capable, and is willing to listen to the public's voices. She hopes the new leader can lead Hong Kong communities in building a more stable and prosperous city.

Also acknowledging the efficient arrangement and lavishing praise on Lee at the polling venue was William Shum, founder and CEO of Memorigin. Shum said Lee is pragmatic and a can-do person — a good listener who has rich experience in working with different authorities.

Voting for the 2022 Hong Kong chief executive election began at the Hong Kong Convention and Exhibition Centre in Wan Chai at 9 am on Sunday and ended two and a half hours later. The candidate who garners over 750 votes from the 1,500-strong Election Committee will win the race.