Chinese celebrate Year of the Rabbit with reunions, hope

* People across China are celebrating the Spring Festival, the grandest celebration of the year that falls on Sunday.

* Around 2.1 billion passenger trips are expected to be made during this year's travel rush, or "Chunyun," between Jan. 7 and Feb. 15, with more than half driven by family reunions.

* The year 2023 is the Year of the Rabbit, the fourth animal in the Chinese Zodiac. Rabbit is a beloved animal in China, symbolizing grace, mercy, auspiciousness, and good luck. These are also things that most Chinese people wish for in 2023.

Tears of joy flooded Li Ji's eyes when her flight finally landed in Beijing, wrapping up her three-day trek home from Omaha, the United States.

Li, a pediatrician working in the state of Nebraska, has been away from home for eight years. While the COVID-19 pandemic made travelling home difficult over the past three years, it has also caused her to realize the importance of making such a journey once conditions allowed. 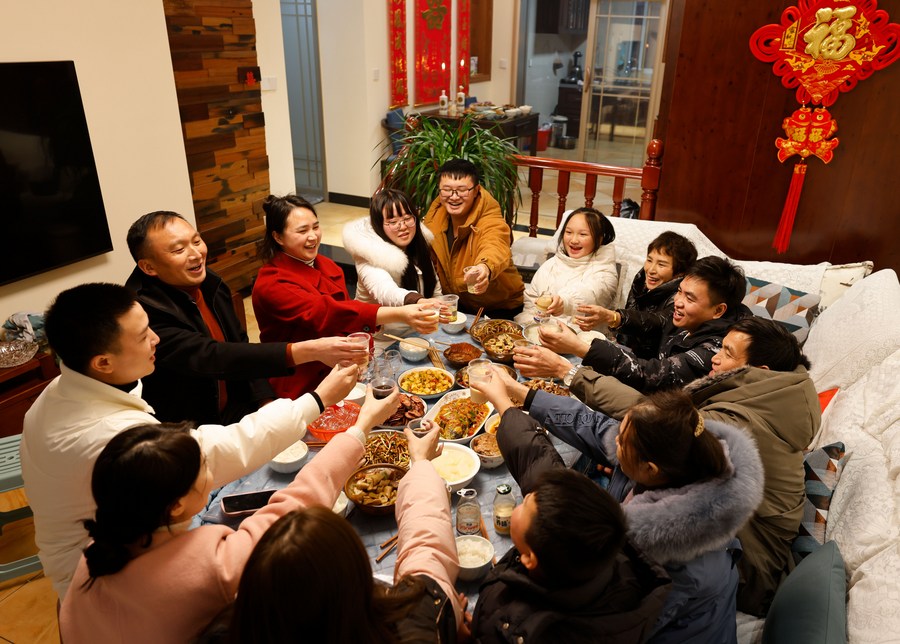 People enjoy a feast on the eve of the Spring Festival in Zunyi, southwest China's Guizhou Province, Jan. 21, 2023. (Photo by Zhao Yongzhang/Xinhua)

"The pandemic has altered many things we took for granted. Family gatherings, for instance, mean so much to me now, and I discovered that spending time with the elderly and other family members is such a wonderful thing," Li said.

The reunion comes after China's latest adjustment to COVID-19 response. Convenient domestic travels and the resumption of more cross-border air routes are bringing back millions of homesick Chinese people for the grandest celebration of the year.

Wang Jili, a native of Shichuan Township, northwest China's Gansu Province, was unable to celebrate the Spring Festival with his family for two years. Working in Beijing, about 1,600 km away, he rushed to purchase a homebound ticket immediately after the release of the adjusted COVID-19 response measures.

"Going home for the Spring Festival is what we look forward to most after a year of hard work. The festival carries extra meaning this year as it's the first one after the optimization of epidemic response measures. I'm full of expectations," he told Xinhua ahead of his trip home.

Across the whole country, people are feeling the same sense of anticipation regarding this year's Spring Festival, which falls on Sunday.

Around 2.1 billion passenger trips are expected to be made during this year's travel rush, or "Chunyun," between Jan. 7 and Feb. 15, with more than half driven by family reunions, according to the Ministry of Transport.

For thousands of years, the Spring Festival has been a time spent with family. In recent times, the annual event began to lose its luster among the younger generations, partly due to the weakening of many folk customs accompanying it. However, the very factors that made homeward journeys difficult over the past three years have revived the value of such occasions in people's minds.

Wang's family nattered away into the small hours on Chinese New Year's Eve, under the backdrop of brightly coloured fireworks.

"It was all idle chitchat about nothing in particular. We talked about life and work in Beijing, the kids and tonnes of small family gossip," said Wang, who also was planning a gathering with long-lost friends at home.

Early on Sunday, they went out, visiting friends and relatives, sending Spring Festival greetings and wishing each other good luck -- an essential tradition on Chinese Lunar New Year.

For Fetra Harisoa, from Madagascar, celebrating the Spring Festival in her husband's home county of Lichuan, east China's Jiangxi Province, is a ritual she would never miss.

Harisoa and her husband met in Madagascar in 2016 and moved to China after marrying. The family of three has now settled in Xiamen, a coastal city in east China's Fujian Province. Every Spring Festival, they take their son back to Lichuan, which boasts more than 100 well-preserved buildings from the Ming and Qing Dynasties (1368-1911). 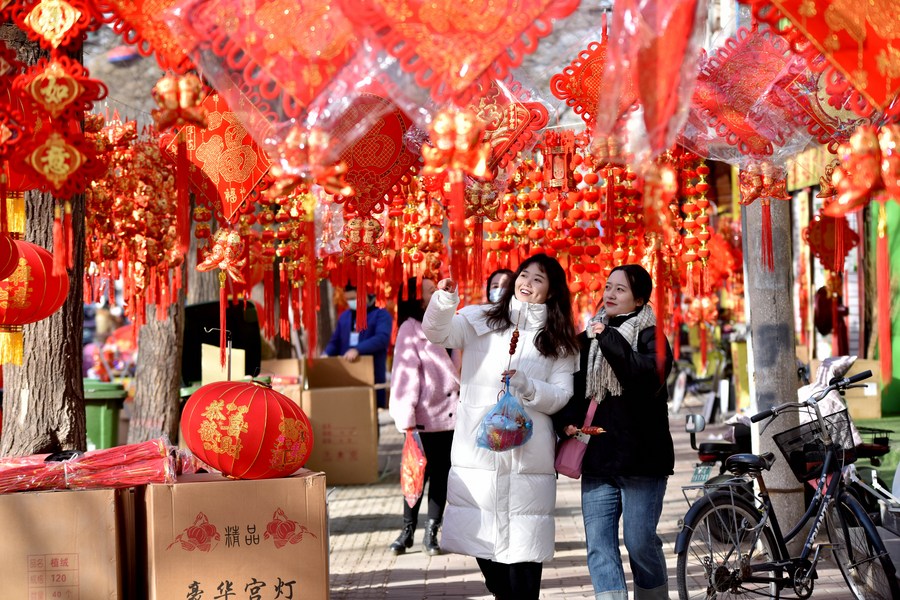 Going to market fairs is Harisoa's favorite errand during the Chinese New Year holiday. Her typical day in Lichuan always begins with visiting the fairs to stock up on Spring Festival snacks and knickknacks, such as couplets, candies, peanuts and melon seeds.

"I love spending time with the whole family. During the Spring Festival, we can also taste many local specialties, such as dumplings, rice noodles and a variety of desserts. It is precisely because of this that I fell in love with the Chinese New Year," she grinned.

The Lunar New Year, or Spring Festival, marks the transition from one zodiac sign to another. As 2023 is the Year of the Rabbit, Lichuan's old street is filled with lights, lanterns and decorations featuring cute rabbit designs, while a variety of folk activities are in evidence. Their five-year-old son has been filled with joy and curiosity on a daily basis.

The rabbit, the fourth animal in the Chinese Zodiac, is a beloved animal in China, symbolizing grace, mercy, auspiciousness and good luck. These are also things that most Chinese people wish for in 2023.

Li treasured the opportunity to return to the motherland and is planning more frequent visits home in the near future. "I intend to take my two children back in the summer. Both of them are very interested in Chinese culture," she said.

Wang and Harisoa's resolutions for the New Year are more or less the same -- spending more time with the family.

"I've been working in Beijing for about six years but my parents have never been to Beijing. Taking them to the Forbidden City and the Great Wall, and having some authentic Peking duck are what I want to do most," said Wang.

"My New Year's wish is to bring my child back to Madagascar to visit his grandparents, aunts and uncles. I also hope that my relatives can come to China to take a look at my wonderful life here," Harisoa said.