Campaigners have praised regulations that allow animals to be isolated with their owners and are now calling for further regulations. 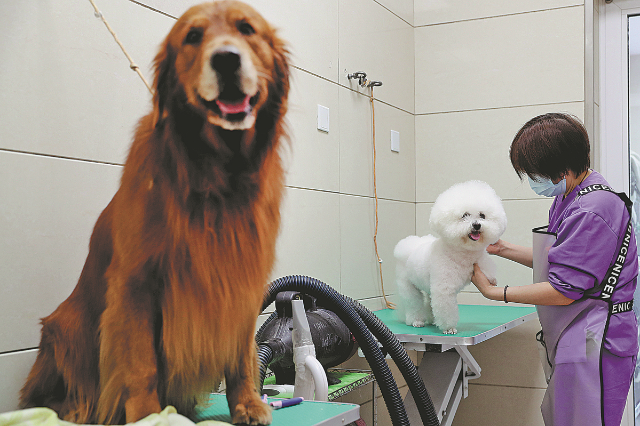 Campaigners have praised regulations that allow animals to be isolated with their owners and are now calling for further regulations.

The ongoing COVID-19 epidemic has raised questions about the role played by relationships and interactions between humans and animals in the context of widespread social distancing and isolation measures.

Recently, a report about a pet cat in Chengdu, capital of the southwestern province of Sichuan, brought the topic into the spotlight.

While its owner was in quarantine, the animal was provided with food, water and a clean litter box after undergoing a nucleic acid test at its home.

Staff members from the local center for disease control and prevention, disinfection experts and police officers were dispatched to the house along with other medical workers, according to Red Star News, a media outlet in Sichuan.

Realizing that the cat would not be accustomed to nucleic acid testing, the staff asked an experienced examiner to handle it.

While the home was being disinfected, the feline was temporarily placed in a pet cage and taken outside to keep it away from its owner's rooms during cleaning and ventilation procedures.

According to statements from the World Health Organization, pets can be in close contact with the novel coronavirus, and there is currently no evidence to suggest that cats and dogs can transmit it to humans.

A lack of regulations about how to treat pets during the epidemic has led to public discussion of recent news reports about an epidemic control worker in the eastern province of Jiangxi who culled a pet dog while its owner was in quarantine.

The worker was punished and transferred to another job, and he was also urged to apologize to the dog owner, according to a notice released by local authorities. The owner expressed understanding toward the man and also for the anti-epidemic measures, the notice said.

"We have no national standards for treating pets in the epidemic, and the worker took the action with the aim of preventing the spread of the virus," said Yang Dengfeng, a professor with the School of Law at Southeast University in Nanjing, Jiangsu province.

"However, putting aside medical research on whether pets can spread the virus, it is improper to cull a pet without informing the owner. The staff member should have sought legal advice and used reasonable behavior despite the pressure of work," he said. 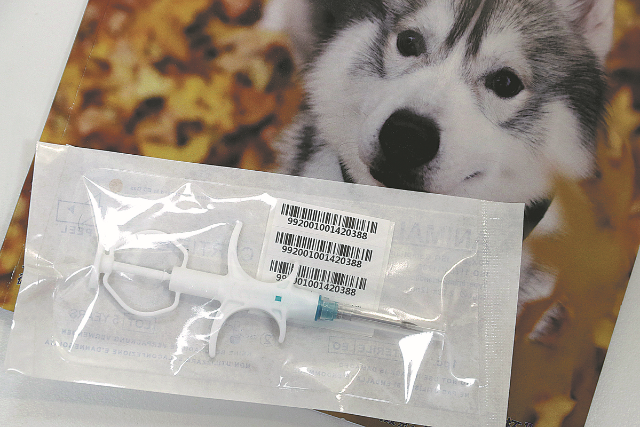 A dog is prepared for an injection to embed an ID chip. WANG JING/CHINA DAILY

After the case sparked outrage online, some NGOs called for the formation of a national pet quarantine system.

In November, the China Small Animal Protection Association posted a statement on Weibo, a Twitter-like social media platform, saying that no harm should be done to animals in the name of epidemic prevention and control.

"In terms of life, both humans and animals should be treated equally. Pets are not just animals, but partners and companions to their owners. We hope all life can be cared for gently, with love and care," the statement said.

Another NGO, the Tajijin Animal Protection Foundation, voiced a similar request and recommended that the national COVID-19 prevention and control guidelines be updated to add a pet quarantine system to the protocols.

The foundation suggested that pets whose owners are confirmed, suspected or asymptomatic COVID-19 cases should be quarantined for medical observation.

"We strongly recommend that pets should be quarantined together with their owners in isolation and under medical observation," said a notice posted on its website.

In addition, the NGO called for the establishment of local transportation procedures and quarantine management plans for unattended pets. "Specifically, after obtaining the owner's consent, quarantine care and nucleic acid tests should be provided for the animal," the notice said. 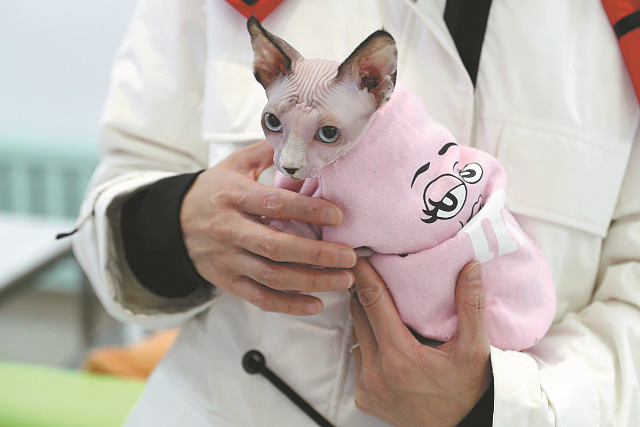 A cat has a health check at the hospital in November. WANG JING/CHINA DAILY

Several cities, such as Guangzhou, capital of the southern province of Guangdong, Beijing and Shanghai, have already taken a more scientific and reasonable approach to dealing with pets during quarantine.

Moreover, once pets left unattended at home have had a nucleic acid test and the owner's consent has been obtained, they can be transferred to third-party professional facilities for temporary care.

In January last year, a residential area in Shanghai's Huangpu district was reported to have recorded new infections. All the residents were quickly quarantined in a hotel, but they were allowed to take their pets with them.

Similar pet-friendly policies have been introduced in Beijing's Changping district. In November, when new infections were reported in the district, several residential areas were isolated and the district government quickly released a new policy on care for pets.

Lyu Dewen, a researcher with the School of Sociology at Wuhan University in Hubei province, said: "Staff members from local epidemic prevention departments, especially in small cities or towns, have barely gained experience in handling pets during the epidemic, so a standard, safe and practical procedure should be introduced gradually. Related policies should also be formulated as soon as possible."

In fact, anti-epidemic approaches concerning animals' interests have not only been introduced for pets, but also for livestock.

Early last year, Shijiazhuang, capital of North China's Hebei province, was hit by a resurgence of COVID-19, with more than 70 new infections reported within a month.

The outbreaks occurred in three villages, which posed challenges for epidemic control work. In response, all the residents were transferred to a designated place for quarantine, leaving a number of dogs and cats plus more than 30,000 livestock-including sheep, pigs, cattle, chickens and ducks-in the villages.

Although at risk of contracting the virus from infected people, the livestock were well cared for.

According to a report in Beijing Youth Daily, 18 epidemic control professionals were sent to the three villages, not only to take care of the livestock, which had run the risk of contracting the virus from the infected residents, but also to conduct nucleic acid tests on them. It was later reported that all the tests had returned negative results.

Subsequently, a three-strong team was tasked with taking care of cats and dogs in the villages.

"Such an approach to epidemic prevention concerning animal welfare brings people happiness. We can understand anti-epidemic staff workers who may resort to some improper behavior due to their responsibility to protect people, but we hope such an approach can be more animal friendly," commented cat owner Li Fang on Weibo, after she had read the story about Shijiazhuang.