Ethiopian CG in Guangzhou: stand in solidarity, no drifting apart

According to the International Civil Aviation Organization (ICAO), more than 40 countries have expressed support for the prevention and control measures China has taken against coronavirus (COVID-19).

According to the International Civil Aviation Organization (ICAO), more than 40 countries have expressed support for the prevention and control measures China has taken against coronavirus (COVID-19).

Among them, Ethiopia has promised to keep flights connecting to China.

“Discrimination toward and restriction of China and its people are unfair,” said Teferi Melesse Desta, Consul General of the Federal Democratic Republic of Ethiopia in Guangzhou stressed in an interview with Newsgd.com at the beginning of February. 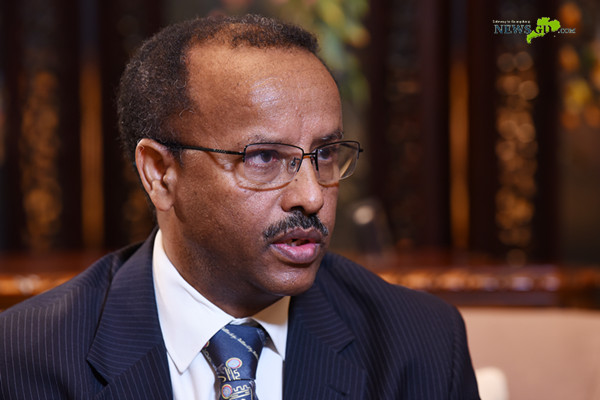 “Restrictions will not solve the problem”

Since the coronavirus outbreak in China, discrimination and fear towards Chinese people have been spread by various of forms through social media, such as caricatures and videos.

“Some people are expressing negative reactions, due to lack of information or different underlying motives,” the Consul General indicated. “This is a time for us to stand closely with the Chinese people.”

“Global restrictions were not as fast or severe when the Ebola, MERS and H1N1 crises hit,” Desta stressed. “This is not fair and we think this is a double standard.”

He agrees with the remarks made by Tedros Adhanom Ghebreyesus, Director-General of the World Health Organization (WHO), and said that “international communication and trade should be equally respected by all countries around the world. Travel restrictions will not solve the problem, but cooperation with each other will.”

Teferi Melesse Desta highlighted that the Ethiopian government stands in solidarity with China and that Ethiopian airlines is the only African airline still flying between the continent and China.

According to an announcement by Ethiopian Airlines, they are to keep regular flights to five cities in China, including Beijieng, Shanghai, Guangzhou, Chengdu and Hong Kong. Furthermore, the airline has promised they will stand with China at all times. 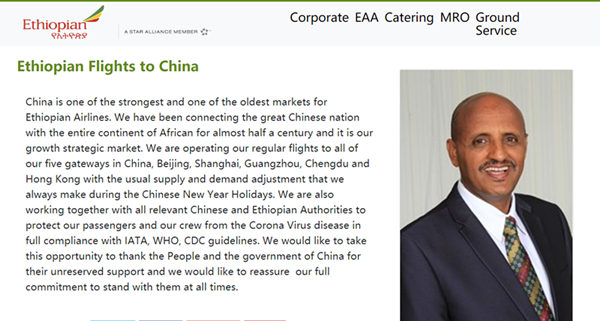 The announcement of Ethiopian Airlines

“Only cooperation will solve this problem,” the Consul General stressed.

“We are closely cooperating with local governments”

Ethiopia has 3300 students in Hubei province and more than 100 in Wuhan. It also has a large number of residents and students living in the six provinces of southern China, the consular district of Ethiopian Consulate-General in Guangzhou.

The Consul General revealed that they have been collaborating closely with the Foreign Affairs Offices of different provinces to exchange information and update the status of their people every day.

“We really appreciate what Chinese authorities are doing to help foreigners in China to get relevant and timely information. The information given on the virus is very fast and has been helping the world to understand about the virus.”

Since the outbreak happened in Wuhan, the central government of China and local governments have been organizing press conferences on a daily basis. By February 13th, the Guangdong Provincial Government had concluded 19 press conferences and had relevant departments address the concerns in such fields as medical services, commerce and education.

Teferi Melesse Desta indicated that what China has done was beyond the requirements of the WHO and has set a high standard. These moves have contributed to the general safety and health of the global community, not only the Chinese people.

In addition, the Consul General feels confident that China with its global counterparts will overcome this challenge together very soon, and stressed that people shouldn't forget the different cooperative mechanisms like the Belt and Road Initiative, through which China is cooperating with different countries and regions globally.

“This will pass, and when it passes, the global solidarity will bring us much closer together,” said Teferi Melesse Desta.

Zoey Huang also made a contribution to this story